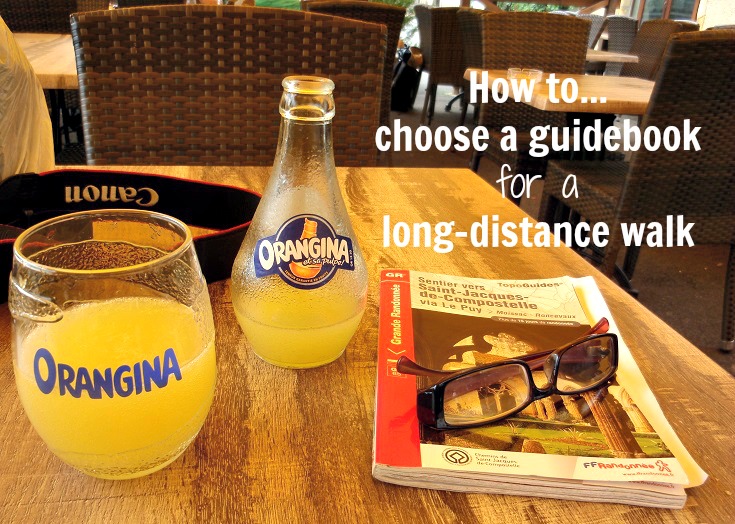 For me, choosing a guidebook to use on a long-distance walk in France is always simple—I’m a dedicated TopoGuide fan!

But there are several other options and another popular choice among walkers I meet is the Miam Miam Dodo guidebook.

Of course, we all look for different things in a guidebook and what appeals to me may not suit your needs at all.

The most important thing for me is the topographic map and I will always buy a TopoGuide if one has been written for the walk I want to do. (Scroll to the bottom of this post for a quick guide to reading topographic maps.)

Many people start a walk with a schedule and a list of villages they plan to stay at along the way but prefer not to book accommodation too far in advance—remaining flexible in case of bad weather, injury or needing (or not needing) a rest day. If this sounds like you, the layout of the Miam Miam Dodo guidebook with maps and accommodation listings on facing pages may suit you much better.

To get a better feel for the differences between the TopoGuide and the Miam Miam Dodo guidebook, I carried both as I walked the GR 70 Chemin de Stevenson and the comparison below is based on these books. Some inclusions, such as where to rent a donkey, will not be applicable to their guidebooks covering other walks.

Published by the Fédération Française de la Randonnée Pédestre (the non-profit organisation that oversees the maintenance of all walking paths in France), the TopoGuide includes— 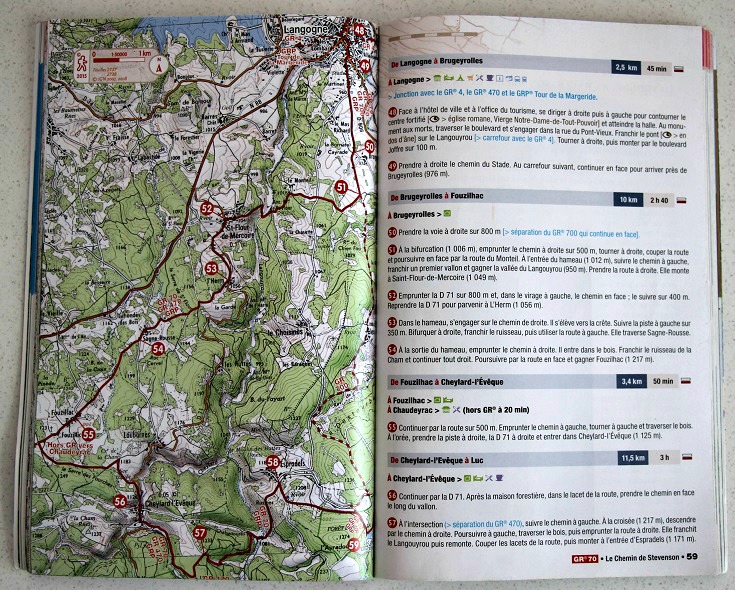 How to purchase a TopoGuide online 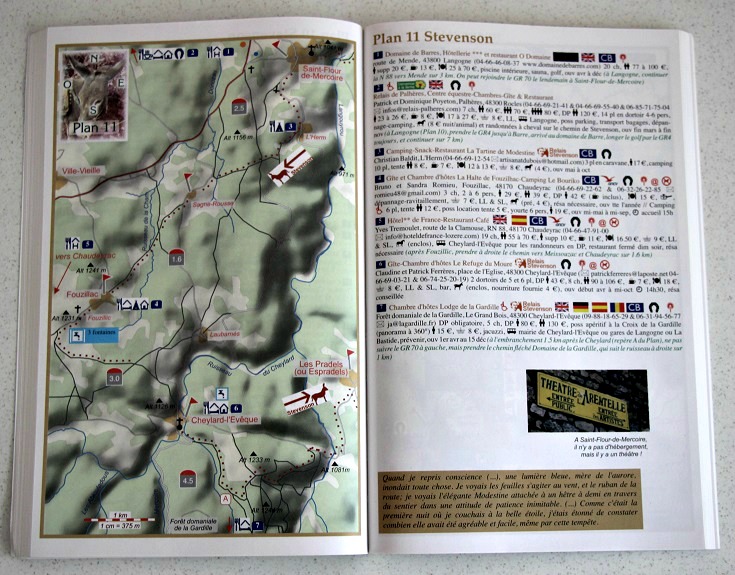 What I like about the Miam Miam Dodo guidebook?

What I don’t like about the Miam Miam Dodo guidebook?

How to purchase a Miam Miam Dodo guidebook online

Why would you buy an I Love Walking in France guidebook?

Obviously, I managed to walk the GR 70 Chemin de Stevenson without the benefit of owning one of my own guidebooks. But it required many days of researching and planning.

The process I used is described here and you can follow these steps to plan any long-distance walk.

If you’ve got better things to do (and because I wouldn’t miss an opportunity for a shameless plug), you’ll find everything you need to quickly and easily plan an itinerary, book accommodation—and much more—in an I Love Walking in France digital guidebook.

Some of the information is also available here on the website—

Inside an I Love Walking in France digital guidebook, you’ll also find— Each village has a dedicated section covering— (Note: I Love Walking in France guidebooks do not include walking notes.)

How to purchase an I Love Walking in France guidebook online

How to read a topographic map

Most guidebooks can be broadly categorised as using either topographic maps, basic drawn maps or written walking notes (ie turn left after the church). I struggle with the last two but find topographic maps a breeze. I assumed this was true for everyone, but I recently read that the number one reason people don’t go hiking or venture off a marked walking path is because they find topographic maps too confusing.

TopoGuides contain lots of useful information so here are a few tips which, hopefully, will make the topographic maps easier to understand. 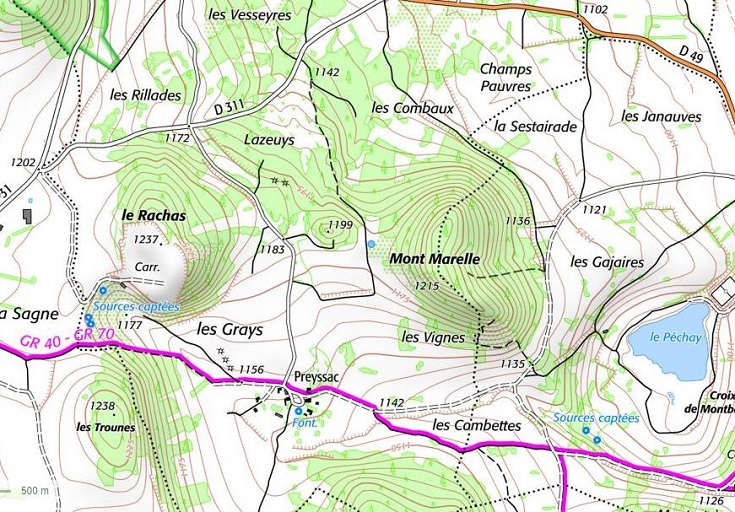 As a walker, that’s a nice start but the important question is—am I going uphill or down? If the contour lines start to form circles and eventually a small ring, you will be headed uphill towards the summit (note how the contour lines form a tight circle around Mont Marelle.) If they start to spread out and lengthen, perhaps heading towards a blue line (stream or river), you will be walking downhill (note how the contour lines start to spread out towards the bottom of Mont Marelle near les Vignes.) Elevations are usually displayed every 50 or 100 metres and at the summit of each hill, allowing you to confirm ascents and descents.

The background of a topographic map will show how the land is being used—tiny trees on a green background indicate a forest, large geometric patches usually indicate fields and dots or crosses often indicate agriculture or a crop of some kind (rather than cattle). Buildings are represented by tiny black squares and you can see if a village covers a few streets, and may have a café (I wouldn’t expect to find a café in Preyssac) or is actually just two houses and a barn.

Roads will be shown on the map—usually solid orange for a major road (note the D49 departmental road in the north-east corner), solid white for a quieter road (note the D311 in the north-west section) and dashed lines for country lanes (note the minor road to the west of les Cajaires which travels south-west towards les Combettes). This will allow you to see where the path crosses the road or where you might find a shortcut. This can be very handy in wet weather when walking paths become slippery and muddy. (Note that the GR 70 joins a minor road a short distance before reaching Preyssac. Shortly after leaving Preyssac, the GR 70 leaves the road and takes a short cut to the south of les Combettes. If this path was muddy, it would be possible to stay on the minor road and take the slightly longer route to the north of les Combettes. This level of detail is provided in the TopoGuide but not in the Miam Miam Dodo guide.)

All of these elements contribute to a bigger picture so when I look at a topographic map, I see a landscape—everything but the cows and whether the path is lined with sunflowers 🙂 or corn 🙁

How do walking notes work?

Some guidebooks provide basic maps alongside very detailed instructions for walking, such as—

“Turn left after the church and follow the gravel path down the hill and through the forest for half a mile. When you come to the clearing, veer right and continue until you reach the apple farm.”

Unfortunately, the part of my brain that is supposed to be looking for landmarks is easily distracted and I lose my bearings very quickly (it’s the same with recipes and IKEA instructions). But I have a son who finds this kind of guide perfect! (He’s the first person I call when I need to assemble anything from IKEA—and, unlike me, he’s never been lost!) If this is you also, check out the Cicerone guides which are written in English and cover many walks in France and elsewhere in Europe.

(TopoGuides also provide walking instructions, en français, but since I get everything I need from the map, I rarely refer to the notes.)

Once you have your guidebook, it’s time to start planning an itinerary.

Sometimes, the walk you’re planning to do is not covered by either the TopoGuide or the Miam Miam Dodo guidebook, but all is not lost!

How to calculate distances when there is no published guidebook

and many more practical tips