Criss-crossed by tens of thousands of kilometres of Grands Randonnées, or long-distance walking paths, France offers walking and hiking enthusiasts a lifetime of options.

No matter what your fitness level, your preferred choice of landscape or how much time you have available, there is a walk to suit you. 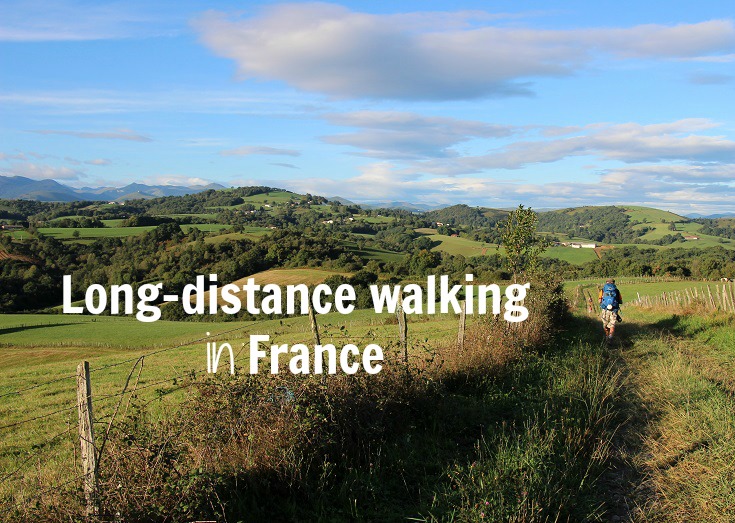 If you are like me and love to stop at every ancient chapel; climb every medieval tower, looking out through observation slits and imagining invading armies charging up the hill…you may want to plan an itinerary which includes a mixture of long and short walking days and lazy afternoons for relaxing or exploring.

For many (myself included), no visit to France is complete without enjoying the fine wine and gastronomic delights on offer in even the smallest of villages.

But, if you love camping and are happy to travel lightly and simply, you have the gift of letting each day play out as you go—stopping in bad weather if you wish and walking as far or as little as you like. 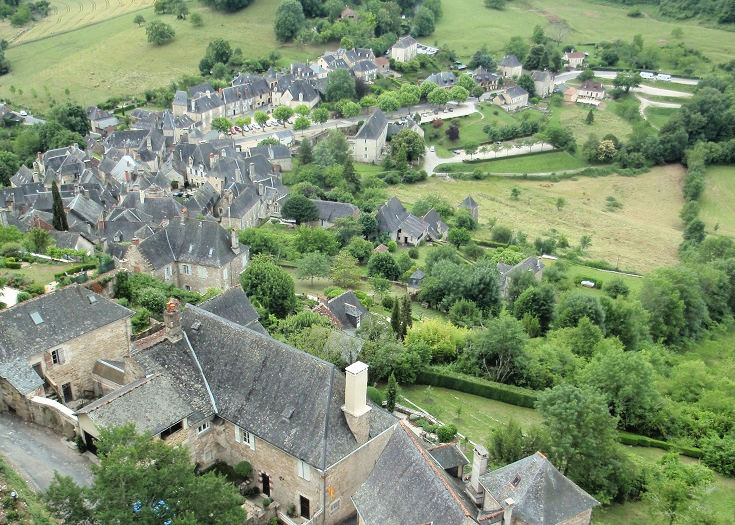 Long-distance walking is not everyone’s idea of a good time—but if you have a reasonable level of fitness and a love of the outdoors, it offers a unique opportunity to slow down and explore villages you might otherwise rush past; a chance to become acquainted with daily life in another corner of the world.

Long-distance walking brings an appreciation for the everyday things you usually take for granted—access to public toilets, an endless supply of bandaids and the ability to buy a cup of coffee whenever the urge strikes.

Long-distance walking offers the opportunity to make new friends with similar goals (please God, help us to find our hotel before dark tonight!) and to offer advice to complete strangers on topics you know nothing about (we’ll be taking this shortcut alongside the river 😉 ). 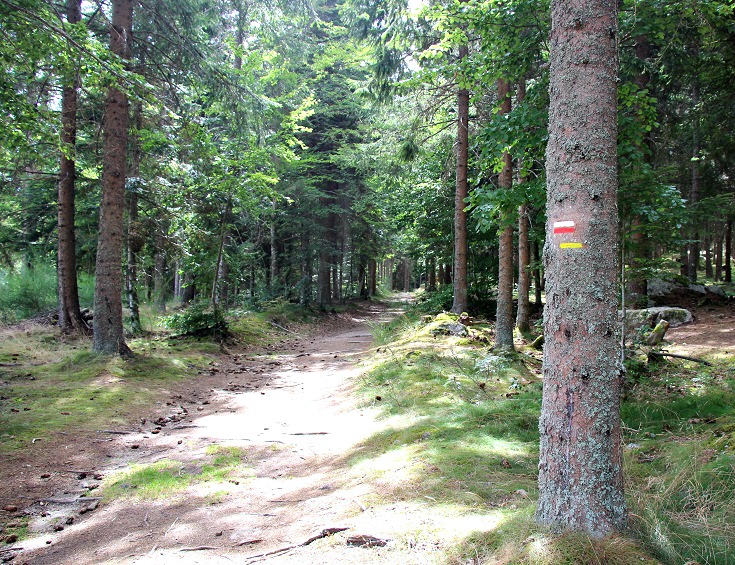 The extensive network of walking paths in France is overseen by the Fédération Française de la Randonnée Pédestre (FFRP), an organisation which maintains, with the assistance of an army of dedicated volunteers, all walking paths throughout the country.

Long-distance paths, or Grand Randonnée, are referred to as GR paths and use a system of red and white blazes to mark the way.

Shorter paths, confined to one region of France, are known as Sentier de Grand Randonnée de Pays or GRP trails and use red and yellow blazes.

Local trails known as Sentier de Promenade et Randonnée or PR trails use single yellow stripes or, where there are multiple paths, multiple colours are used. 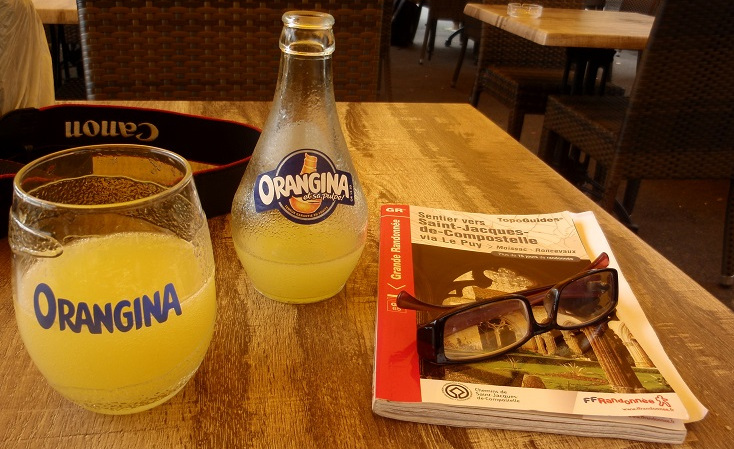 Several organisations publish guidebooks which provide various levels of detail on the route, villages you’ll pass through and the distances between them. Two popular choices among walkers are the TopoGuide (published by the FFRP) and the Miam Miam Dodo guidebooks.

My preference is for the TopoGuide whose topographic maps give a detailed feel for the terrain and show where I am in relation to the road, allowing me to avoid a muddy track in bad weather—or that one hill too many!

As I walked the Chemin de Stevenson, I carried both guidebooks and you’ll find a comparison of the two, along with tips for navigating the French online bookstores here. 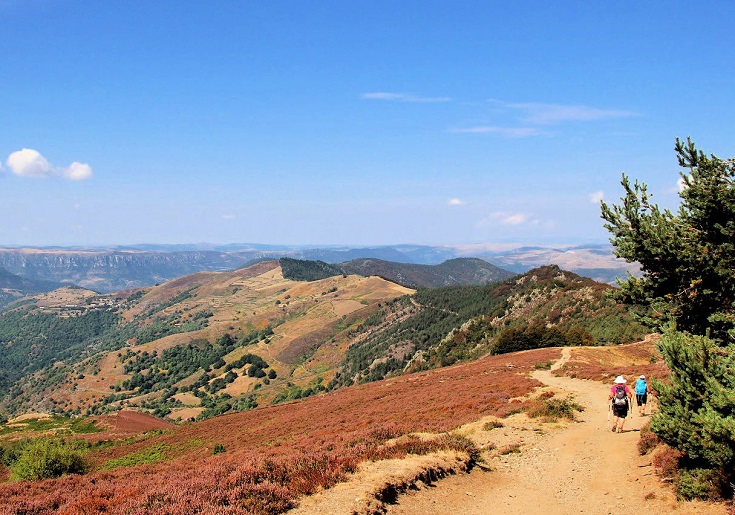 What to pack for a long-distance walk

Your packing list for a long-distance walk will be completely different than if you were spending your holiday lounging around the pool at a seaside resort or being whisked from city to city on a coach tour.

Although many walkers (myself included) have their luggage transferred from hotel to hotel, many others follow a much less structured itinerary and carry everything with them each day. The trick then, is to take as little as possible!

After some trial and error, I’ve narrowed down my list to sixteen essential items plus a few optional extras and compiled them into a handy one-page checklist which I keep in my suitcase.

You’ll find the checklist on page 17 of your guide—3 Steps to Finding the Perfect Long-distance Walk which you can download from here. Always take as much water as you can comfortably carry each day and refill your water bottles whenever you get the chance. In some tiny villages it can be surprisingly difficult to find water, or even the café listed in your guidebook.

REMEMBER: if water is marked as non potable, do not drink it!

As you set out each day, remember that bakeries (boulangeries) and grocery stores (épiceries) will close at lunch time and may not reopen until as late as three in the afternoon. French law also states that all businesses must close for one full day (most often on Monday) each week.

To avoid being caught with no food, buy supplies before you leave town each morning. Better still, buy supplies (nuts and dried fruits are good choices) that will last a few days and won’t spoil if you are lucky enough to find a café at lunch time. 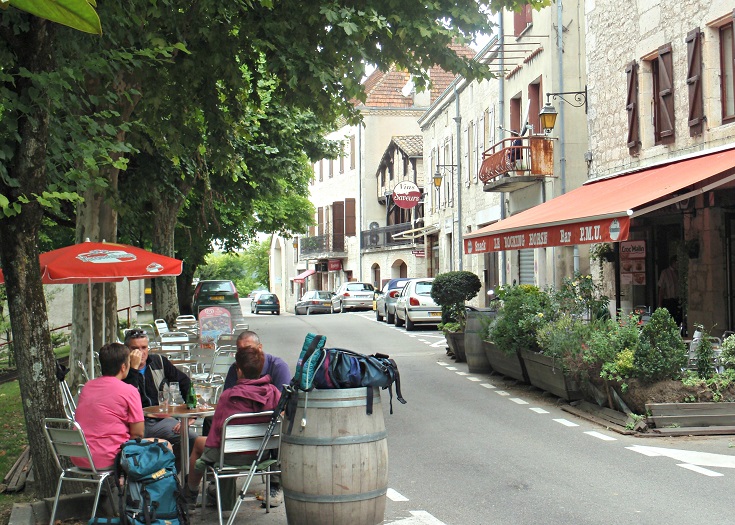 Somewhere in France is a walk with your name on it—a walk that incorporates all the magic you are dreaming of, whether that be fairy-tale castles and most beautiful villages; wide open spaces or rugged coastlines; or an easy, flat walk (or cycle) along a canal. 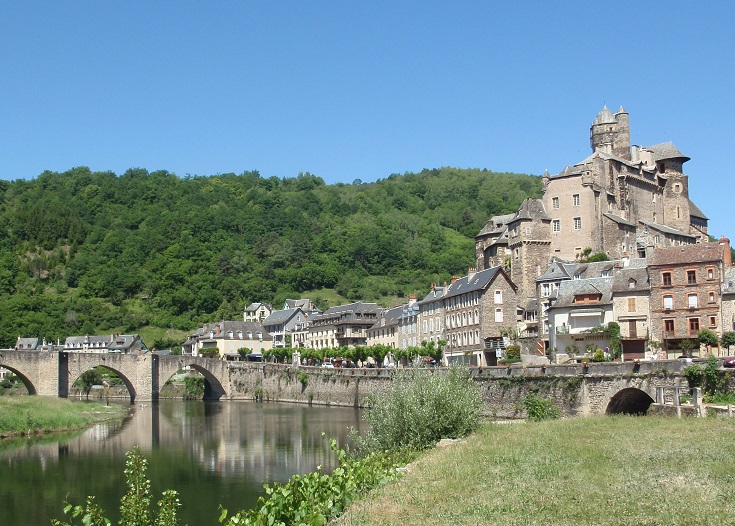 The Chemin de Saint-Jacques du-Puy has been guiding pilgrims from Le Puy-en-Velay to Saint-Jean-Pied-de-Port (the starting point of the Camino across Spain) since the tenth century. Today, tens of thousands of walkers make the journey every year—crossing the wide-open spaces of the Aubrac region, climbing the foothills of the Pyrénées and passing through eleven of France’s most beautiful villages (and the opportunity to dine at three Michelin-starred restaurants). 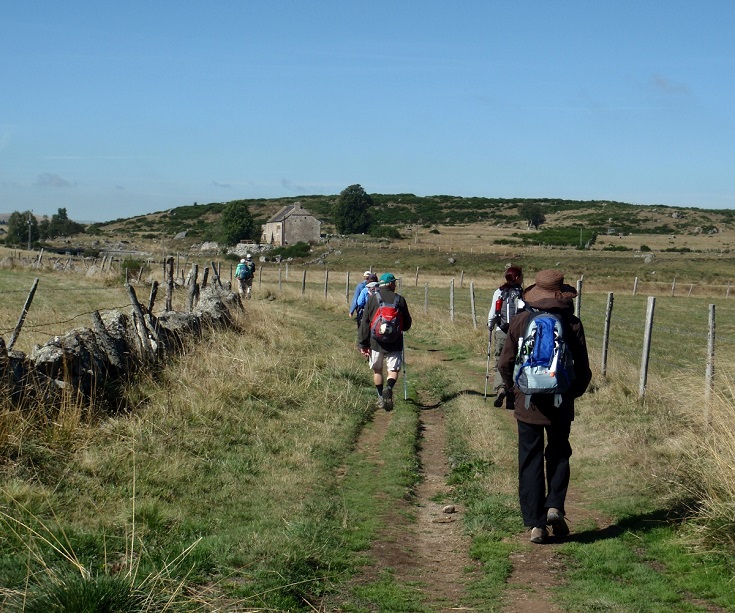 People walk the Chemin de Saint-Jacques for a variety of reasons—sometimes for the physical challenge, sometimes as a walking meditation, often for religious reasons. If you are not an experienced long-distance walker this is the perfect walk to cut your teeth on. There is almost always another walker in sight—someone to chat to and compare blisters with 😊

And of course, there is no need to complete all 750 kilometres (470 miles) in a single trip—take it as fast or as slow as you like.

If you are looking for a flat, easy walk with almost no chance of getting lost, canal towpaths offer a glimpse into rural France more commonly viewed from a boat. 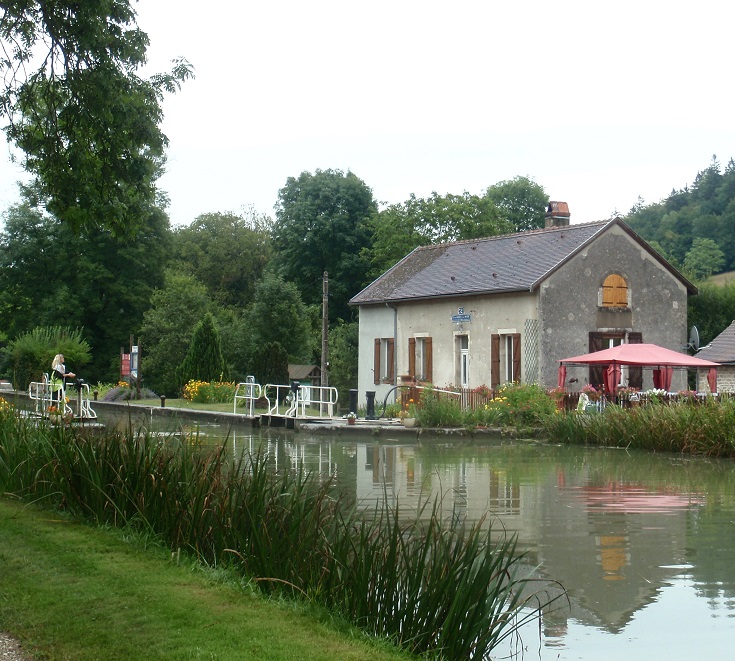 Walking (or cycling) along the Burgundy Canal, you’ll find yourself within walking distance, or a shuttle bus ride, of eight châteaux, eleven churches, one abbey, three of France’s most beautiful villages, countless picturesque lock-houses and the historic city of Dijon.

Many Tourist Offices along the canal provide a bike rental service and if you’d like to mix it up a little, you can pick up a bicycle in one town and return it a day or two later further along the canal.

Learn more about walking along the Burgundy Canal 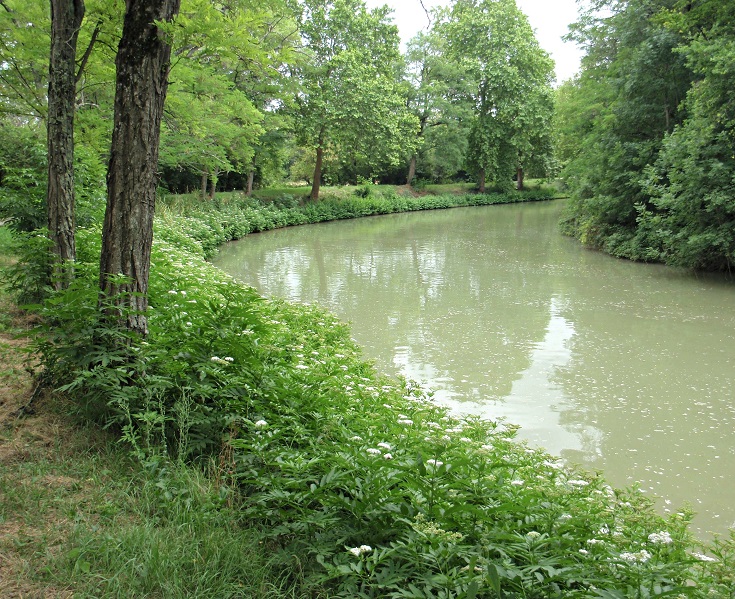 The Midi Canal from Toulouse to Carcassonne offers a more tranquil experience as it meanders through overhanging trees and opens up into fields of sunflowers. But this is one of the most popular holiday destinations in France for boating enthusiasts so you are never too far from a friendly face!

A few days in Toulouse before you start walking will be quickly filled with visits to museums and art galleries or day trips to Lourdes or Albi and five days of walking is rounded off nicely with a visit to the medieval city of Carcassonne. There are several opportunities for fine dining on this walk with Michelin-starred restaurants in Toulouse and Carcassonne—so reward yourself for a walk well-done, no matter which direction you go!

Learn more about walking along the Midi Canal Views from Cap de la Chèvre on the coast of Brittany

Rugged headlands and dramatic cliffs, swathes of dancing wildflowers, wide sandy beaches and quaint fishing ports—the coast of Brittany has it all! Although the 160-kilometre (100-mile) section of the GR 34 between Camaret-sur-Mer and Audierne is challenging in some areas and not always a good choice for anyone with a fear of heights, the scenery is spectacular and on a sunny day, with a gentle breeze, I would rate this (and continuing along the GR 34 to Lorient) as my favourite walk in France!

Learn more about walking along the coast of Brittany 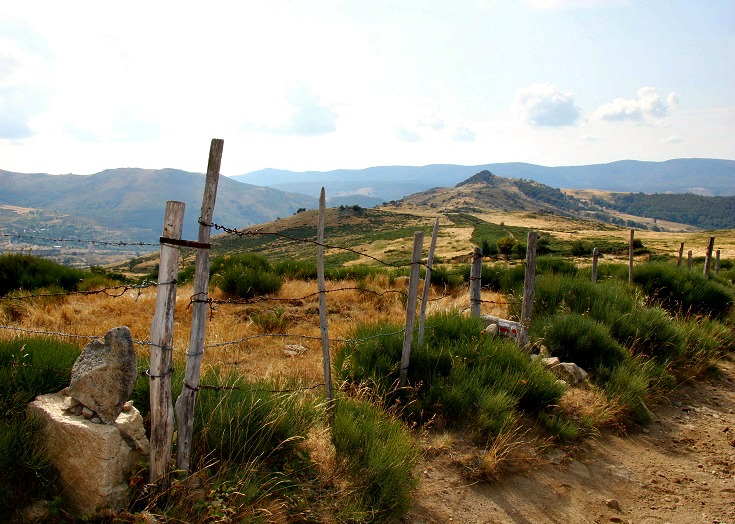 In September 1878, the Scottish author Robert Louis Stevenson left the village of Le Monastier-sur-Gazeille accompanied by his donkey Modestine. Over the next eleven days, the pair travelled south through the Cévennes (one of France’s most loved National Parks) and arrived in Saint-Jean-du-Gard, having walked a little over 225 kilometres (140 miles). Now extended at both ends to link Le Puy-en-Velay to Alès, the Chemin de Stevenson, or GR 70, is a spectacular walk—of gentle slopes, endless ridges, relentless hills and majestic landscapes.

Learn more about walking along the Chemin de Stevenson 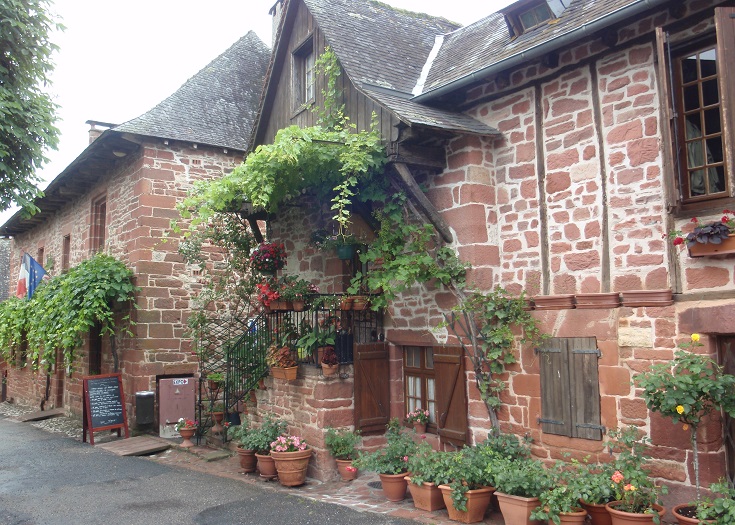 For a journey with more than its fair share of fairy-tale castles and picturesque villages, it’s hard to go past the 127-kilometre (80-mile) walk from Martel to Rocamadour.

Passing through six of France’s most beautiful villages—Turenne, Collonges-la-Rouge, Curemonte, Autoire, Loubressac and Carennac—this walk also offers the opportunity to visit the underground lakes and caves of Gouffre de Padirac and explore the châteaux at Montal and Castelnau-Bretenoux. After seven days of walking, you’ll arrive in Rocamadour, (considered the second-most important religious site in France after Mont-Saint-Michel) where Zaccheus, a servant of the Virgin Mary, came to live in the caves as a hermit in the years following the death of Jesus.

Learn more about walking from Martel to Rocamadour 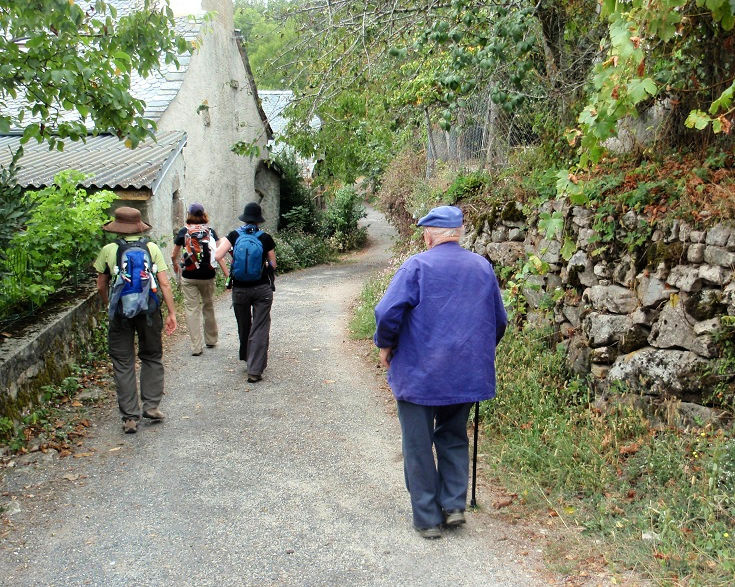 Get started: A step-by-step guide to choosing a walk and planning an itinerary (using the GR 70 Chemin de Stevenson as a case study).

Practical tips: Everything you need to consider before leaving home, including physical preparation, choosing the right guidebook, walking safely and walking alone, booking accommodation in French, what to pack, avoiding blisters, and the best time of year to walk.