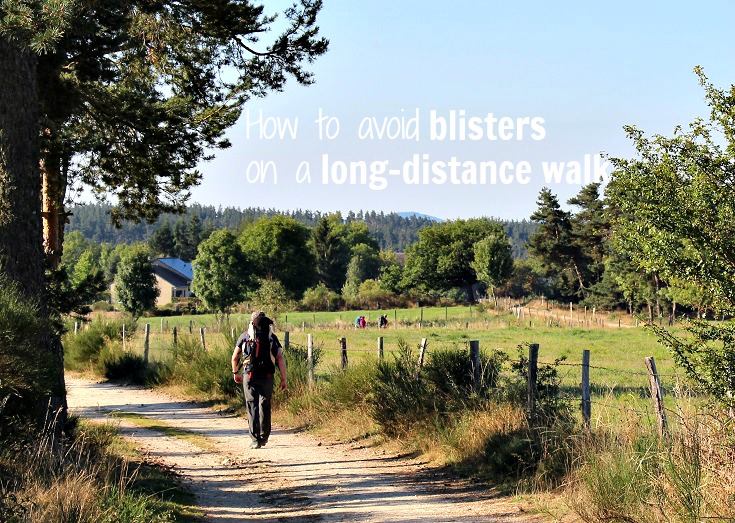 Tips for avoiding blisters on a long-distance walk

Until recently, I thought blisters were a necessary and unavoidable evil.

As someone who often walks 15—20 kilometres (10—12 miles) each day on a regular holiday, I’ve always suffered from tiny water blisters on the balls of my feet. Each night, I’d slice them open, release the liquid and cover them with a large band-aid before starting over the next morning. The little bit of padding in a band-aid (maybe two) was all I needed to feel OK and do it again another day. I assumed this was the price to be paid for choosing style over practicality in walking shoes!

A few years ago, I spent three weeks walking in Burgundy before heading back to Paris for a week with friends and another week walking part of the Chemin de Saint-Jacques du-Puy. By the time I reached Paris, my feet were a bit messy. By the time we finished the week of walking, my feet were too gory to look at! Each afternoon, as I stopped walking, the blood pooled in my feet and created a vacuum in my boots. I’d have to lie with my feet in the air until the blood dispersed and I could get my boots off. 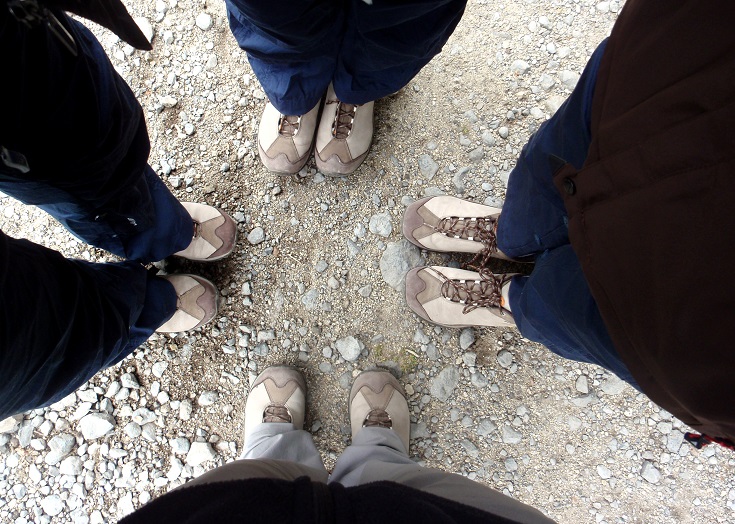 Despite all of us wearing the exact same très confortable et sensible Merrill walking shoes, my friends survived relatively unscathed! And ironically (but for reasons easily explained by my podiatrist), my feet hurt the LEAST when I was walking and the most when we stopped for lunch!

As it turns out, blisters are NOT a necessary and unavoidable evil.

A visit to the podiatrist when I returned home revealed some flaws in my walking technique (who knew there was such a thing). By lifting my heel too early, the muscles in my lower calf were not being used—they were locked tight and it was difficult for blood to be pumped back up away from my feet. (As I walked, the pressure on the balls of my feet provided some mechanical pumping action, but once I stopped, gravity took its toll and the blood slowly pooled.)

He suggested a number of strategies to overcome these problems—

(1) Calf massage and exercises to loosen the calf muscles

The improvement in my feet on the next walk was enormous!

I had rubbed the methylated spirits on my feet with a cotton pad and so I developed some small blisters in the places I missed—between my toes, under my toes…and I dislodged a toenail because I hadn’t allowed for the compression sock providing less padding inside the shoe.

(1) Calf massage and exercises to loosen the calf muscles

(3) Wearing socks with individual toes and toeless compression stockings while walking (although I found the toeless stockings trapped fluid in my feet so I only wore them once).

I am delighted to say I had NO problems on my next walk!!

Despite all my preparations (which resulted in blister-free walks along the coast of Brittany and the first and last sections of the Chemin de Saint-Jacques du-Puy), my feet became somewhat battered and I developed a few blisters.

Day one of the Chemin de Stevenson from Le Puy-en-Velay to Le Monastier-sur-Gazeille was to be a nineteen-kilometre (thirteen-mile) walk. But after accidently veering off the GR 70 and onto another red-and-white blazed GR path (most likely the GR 3F), it became a much longer day of more than thirty kilometres (nineteen miles). Somewhere past the twenty-five kilometre mark, I felt my feet tingling as the circulation started to struggle; a few kilometres more and they were becoming noticeably tender as blisters formed on the balls of my feet.

What did I learn?

It’s a sad fact that I’m no longer thirty years old and my feet have a quota of work they are willing to do in a day. For me, it seems this is around 25 kilometres—any more than this and I’ll suffer the consequences. Thankfully, my feet toughened up somewhat and, although tender, saw me through the remainder of the walk without too much trouble. And after a day of rest as we travelled back to Paris on the train, they were as good as new!

BONUS TIP—A Scottish lady we met while walking recommended Compeed gel patches. Available in several sizes, they provide padding and waterproof protection to blisters and should be left on for several days (even in the shower) while the raw skin heals. I’ll be adding a few to my first aid kit for next time. (I also figure this works like the umbrella principle—anything I carry will not be needed!)

I’m not suggesting for a moment that my blister solutions will be the answers to your problems.

But if you do suffer from blisters while walking, please know that there may be a solution. Find a good podiatrist who will assess your walking technique at least six weeks beforehand, giving you plenty of time to implement and prepare.