Toulouse is a favourite destination for many visitors to France. It’s also the starting point for a walk along the Midi Canal (also known as the Canal du Midi en français) as it winds its way south-east through quintessential French country villages, towns and cities, reaching Carcassonne and its beautifully preserved medieval city some hundred kilometres (60 odd miles) later.

Along the way, the canal is a constant, peaceful and serene ribbon of greenery. Boat traffic moving through the locks provides an interesting distraction and every now and then, the canal passes over the top of the freeway or another river and reminds you what an engineering masterpiece it is.

At other times, when there is no-one else in sight, it is easy to let your mind drift back three hundred years, and imagine horses plodding along the same towpath, pulling their barges behind them.

Where is the Midi Canal in France? 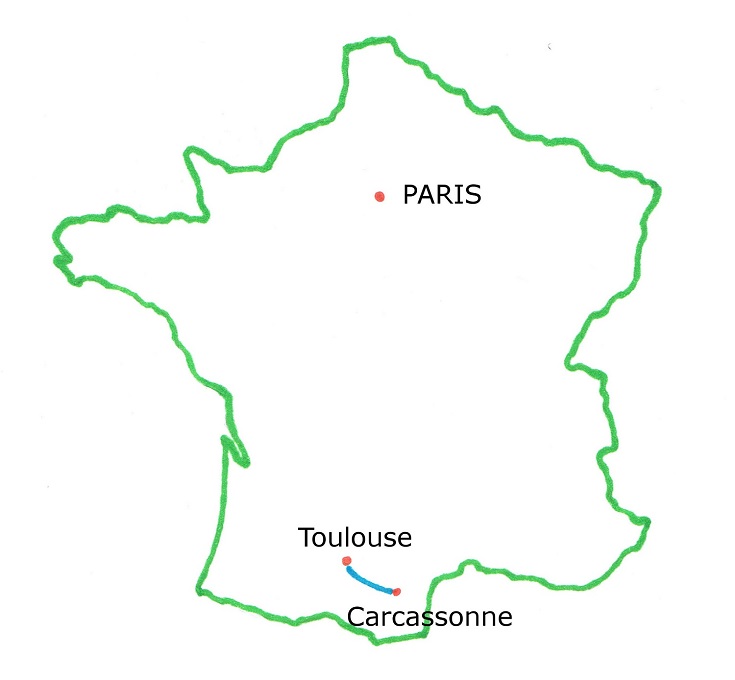 Map of the Midi Canal from Toulouse to Carcassonne 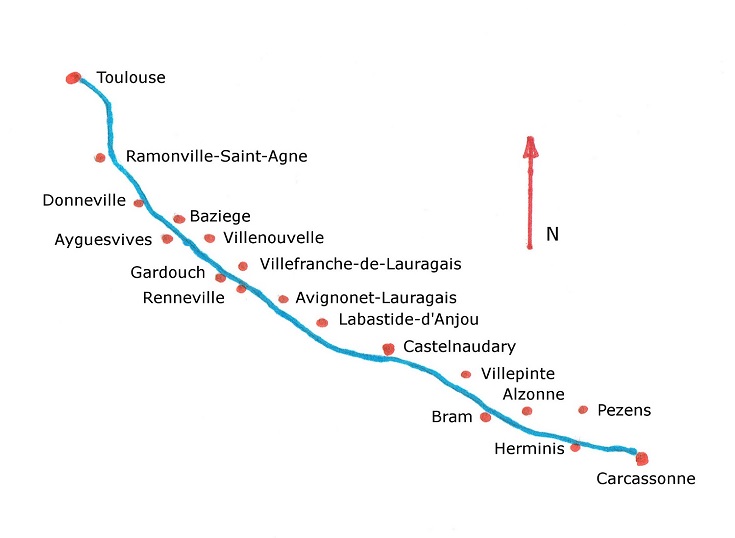 Accommodation along the Midi Canal

You are never too far from somewhere to sleep while walking along the Midi Canal. Although there are few towns offering accommodation located on the canal, there are plenty of options if you are willing to detour a kilometre or two from the towpath.

The longest section, from Castelnaudary to Villepinte, requires a walk of 12.4 kilometres (7.8 miles) and a further ten-minute walk from the canal into town.

Since the canal is flat and the walking is easy, my suggested itinerary recommends walking between twenty and twenty-five kilometres (12 – 16 miles) over five days but this could easily be increased if your time is more limited.

(If you choose to pre-book accommodation in one of the barges along the canal, check that it will be moored where you expect during your walk.)

Accommodation is available in the following towns, with distances given from the starting point of Toulouse.

Fields of sunflowers lining the canal are a definite highlight of the Midi Canal and so I would do this walk in summertime when they are at their best.

The weather is not unbearably hot at this time of year and the canal is mostly well shaded and not a difficult walk.

The entire stretch between Toulouse and Carcassonne can be covered comfortably in five days, or a section of it could be a good way to ease your muscles into a more difficult or strenuous walk.

Carcassonne marked the end of my trip along the Midi Canal but if you have an extra week to ten days available, continue walking another 135 kilometres (84 miles) and you’ll reach Sète on the Mediterranean Sea.

If you prefer to set your own agenda, I share the steps I take to calculate distances on any long-distance walk (using the Chemin de Stevenson as a case study).

If you choose to cycle along the Midi Canal, an overnight stop at Port Lauragais will break the journey neatly into two manageable stages.

History of the Midi Canal

Designated a UNESCO World Heritage Site in 1996, the Canal du Midi is an engineering masterpiece stretching 240 kilometres (150 miles) from Toulouse to Sète on the Mediterranean coast.

By extending the reach of the Garonne River (already navigable from the Atlantic Ocean to Toulouse), the canal allowed transportation from one side of France to the other.

The economic and political benefits to France were enormous, as it was no longer necessary to sail the 3,000 kilometres (1,875 miles) around the south of Spain and through the strait of Gibraltar—a route controlled by Spain and prone to pirate attacks.

The double lock at Écluses de Gardouch – twice the work for those travelling by boat!

Although a canal across France had been discussed for hundreds of years, the stumbling block had always been finding the means to supply it with water and to traverse the highest point near Écluse de l’Océan.

The solution was found by Pierre-Paul Riquet, who designed a system to collect water from the Montagne Noire (Black Mountain), channel it into an artificial reservoir (the Saint Ferréol Bassin) and feed it thirty-four kilometres (twenty-one miles) downstream to what is now the Déversoir de Naurouze. From here, the water feeds into the canal in either direction as required to keep the water levels at the proper height. Water can also be pumped from the canal back into the déversoir, should it threaten to overflow the canal. 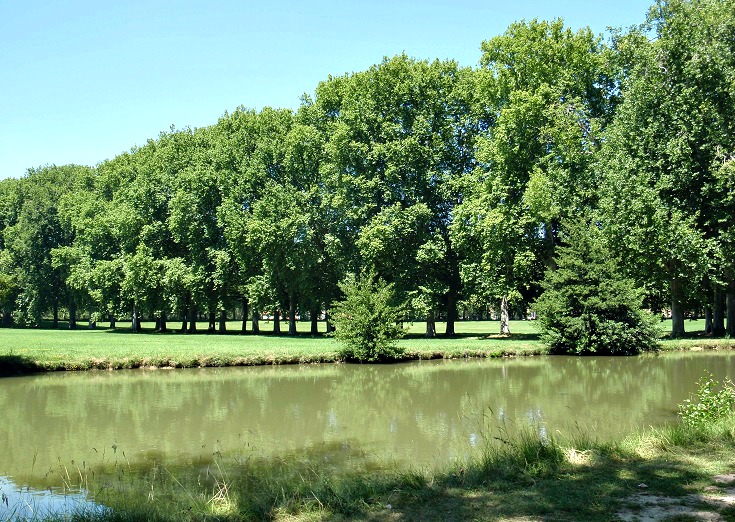 The water stored at Deversoir de Naurouze is fed into the canal, keeping water levels constant

Construction of the Saint Ferréol Bassin and the first stage of the canal from Toulouse to Trèbes began in 1667. In all, there are sixty-four locks from end to end. Forty-nine locks are required to facilitate the change in altitude from Déversoir de Naurouze (190 metres) to the Mediterranean Ocean.

Twelve thousand men and women were involved in the project, which was completed fourteen years later. Unfortunately, Pierre-Paul Riquet died eight months before the canal was inaugurated on 24 May 1681 and never saw the entire canal in use (although sections were opened to traffic as construction was completed).

Prior to the invention of motor boats, horses (and sometimes men) towed the barges along the canal—hence the presence of a tow path for you to walk or cycle along today.

Écluse de Negra, where barge passengers stopped for lunch on the first day of their journey along the canal

In the past, the journey from Toulouse to Sète took four days, with fixed stops for lunch and overnight stays, as there were no sleeping quarters for passengers on the vessels. In those days, you would have stopped for lunch on the first day at Écluse de Negra and reached Castelnaudary by nightfall. The following day you would have eaten at Écluse de Béteille before continuing on to Trèbes, thirteen kilometres (eight miles) past Carcassonne, to stop for the night.

Commercial trade has long since ceased, but the enduring beauty and serenity of the Midi Canal ensures it will remain one of the more popular holiday journeys in France.

What is there to see and do as you walk along the Midi Canal? 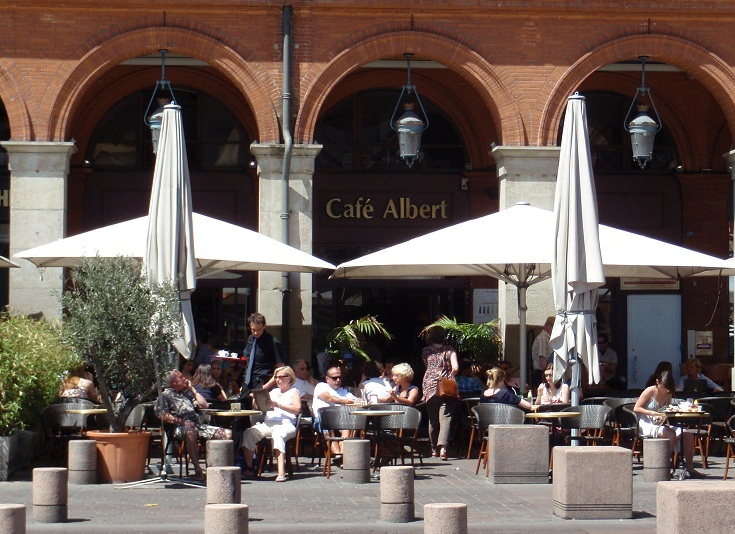 Before starting your walk, allow a day or two to explore Toulouse. There is plenty to do and see here in France’s fourth largest city, including—

Take a closer look around Toulouse and find a comprehensive list of accommodation. 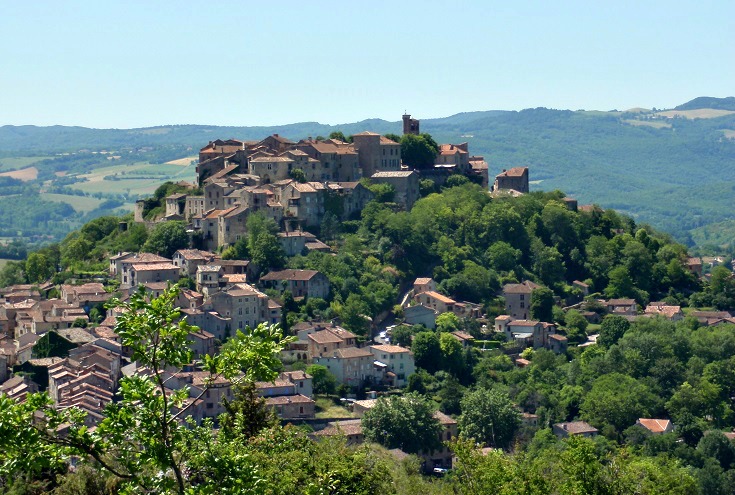 Explore Castelnaudary, then venture off the canal to Abbaye de Villelongue

After three days of walking, you’ll arrive in Castelnaudary—one of the few towns right on the Midi Canal. Take advantage of the convenient location and spend the night here, stocking up on bandaids, trail mix and other supplies.

If you arrive early in the afternoon, take a taxi to visit the beautifully restored ruins of Abbaye de Villelongue. Founded in 1180 by Cistercian monks, the remains of the church and cloister offer a glimpse into religious life in the Middle Ages.

Take a closer look around Castelnaudary and Abbaye de Villelongue and find a comprehensive list of accommodation.

Wander the medieval streets of Carcassonne

Almost every organised coach tour that rushes around France makes a stop at Carcassonne.

There’s no denying that the medieval city overlooking the town is both beautiful and fascinating. But rural France is filled with authentic ancient chapels and medieval villages where people live and modern life continues in an historic setting. For me, Carcassonne was a confusing blend of new (nineteenth and twentieth century) restorations, rearranged from old stones—some true to the fourth century origins of the fortified château but many not.

If you’ve walked this far from Toulouse, you’d be crazy not to venture up the hill and look for yourself. Let me know what you think!

Views from a watch-tower in Carcassonne

Take a closer look around Carcassonne and find a comprehensive list of accommodation.

As you walk through the towns along the path, you’ll discover fresh food markets overflowing with local produce. Pick up some seasonal fruit and home-made (à la maison) jams and cheese to add to your picnic basket. 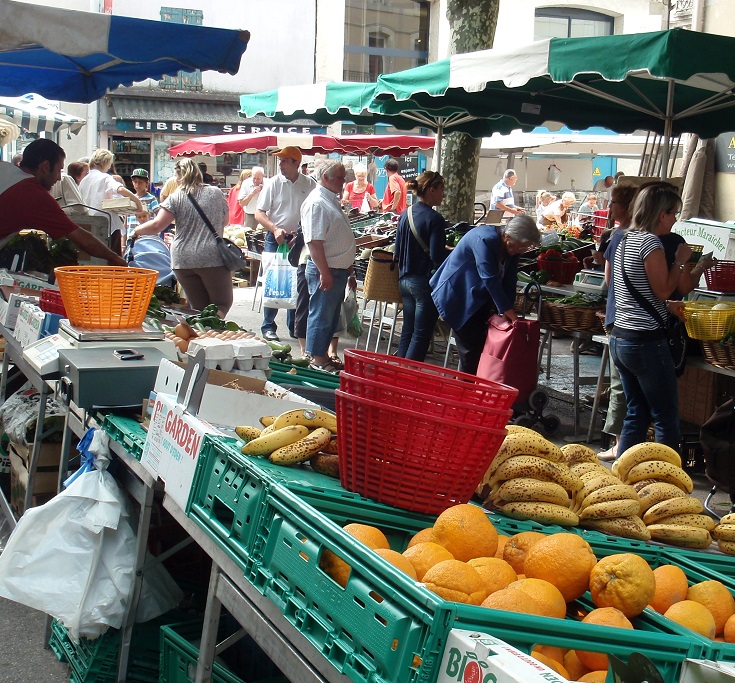 Do it in sections…

Today, the sixty-five kilometre (forty-mile) stretch from Toulouse to Castelnaudary offers an easy three-day walk. At this point of your walk, you may like to stop and catch the train back to Toulouse or on to Carcassonne.

Alternatively, you can rent a boat in Castelnaudary and sail the remaining 180 kilometres (112 miles) to the Mediterranean Sea. If you continue on foot, a comfortable, two-day walk will take you into Carcassonne.

Near Renneville – a riot of sunflowers to the left, calm and tranquility to the right

The path from Toulouse to Avignonet-Lauragais is mostly bitumen, and so flat you could almost drag your suitcase along behind you. After Avignonet-Lauragais, the path changes to dirt (with patches of gravel and the odd tree root) but is still an exceptionally easy walk.

The other advantage that the canal offers is that it is virtually impossible to get lost—at least, not until you venture off the path in search of your accommodation for the night (which is exactly why the guidebook provides directions to and from the canal for each town!).

The towns you may choose to stay in for the night are pleasant. In most cases, the church is the architectural highlight, but these will usually be locked during the week, so there is little point in detouring off the canal except to sleep or if you need supplies.

Follow my suggested itinerary along the Midi Canal from Toulouse to Carcassonne from the comfort of your armchair:

Explore other canal walks in France