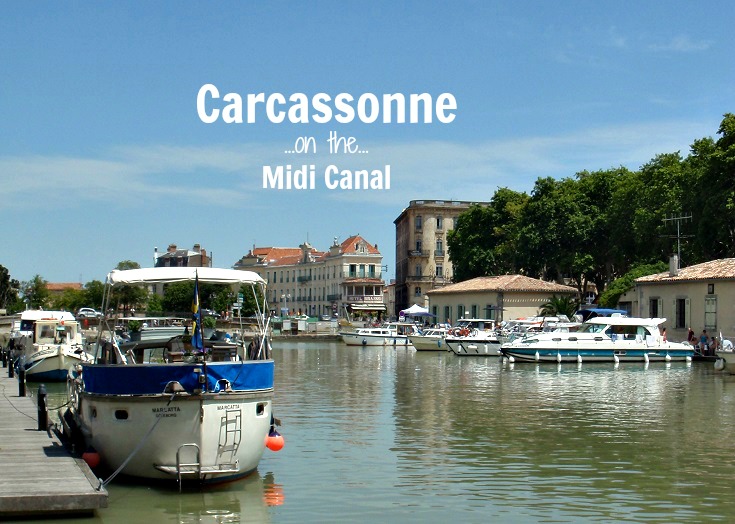 Five days of easy walking along the Midi Canal from Toulouse brings you to Carcassonne — a large, busy town divided into two distinct sections. The lower town (Ville Basse) surrounds the canal and accommodates the train station and all the modern commercial activities.

On the edge of town, and easily accessible by bus, lies the UNESCO-listed medieval city—a highlight of many a coach tour and featured in most French guidebooks. 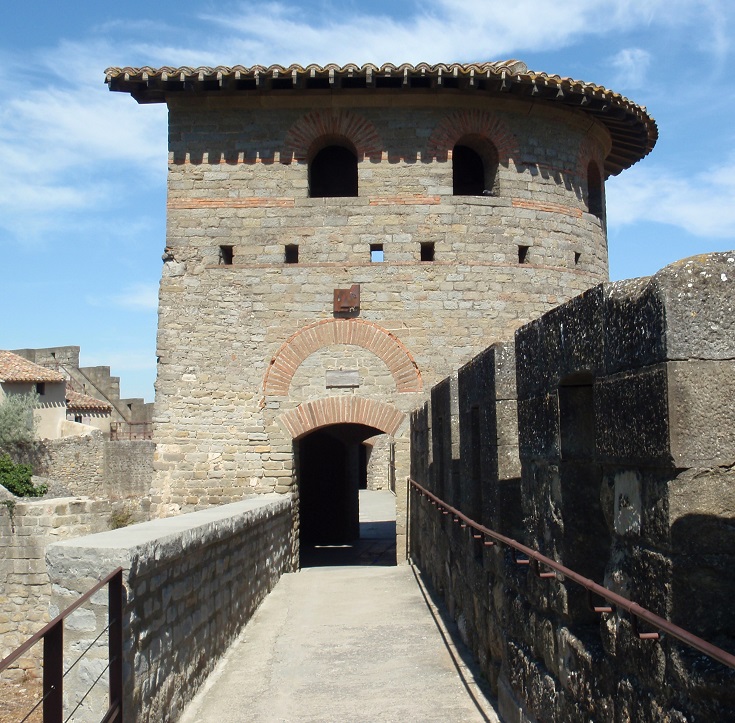 Watch-tower on the remparts of the medieval city

Founded by the Romans in the first century BC, Carcassonne was an important post on the ancient trade route from Toulouse to Narbonne and, while under Roman rule, a wall was built around the town to protect it from attack.

Carcassonne flourished for the next thousand years and, during the twelfth century, construction began on the fortified château which dominates the town.

But by the seventeenth century, the city’s strategic importance had diminished and Carcassonne began to fall into disrepair. Some of the stone from the buildings and wall was removed for use in the construction of the lower town. 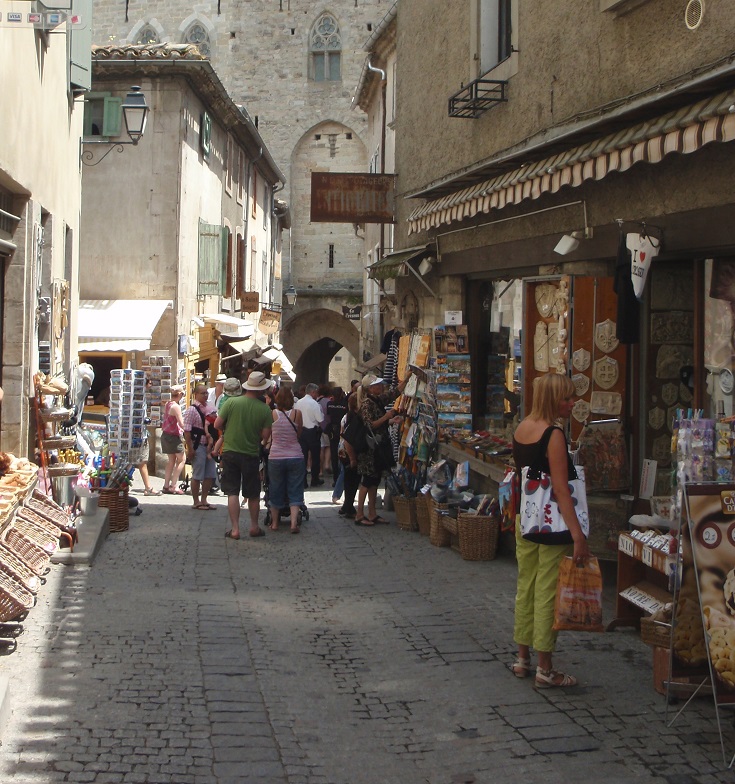 Gift stores line an alley in the medieval city

Since then, the medieval city has undergone several restorations—and there is no denying that the château, church and quaint alleyways you’ll wander through today form a charming backdrop to dozens of restaurants and gift stores. But, gazing out over the rooftops and turrets, it can be quite difficult to imagine how the city would actually have looked in its heyday. 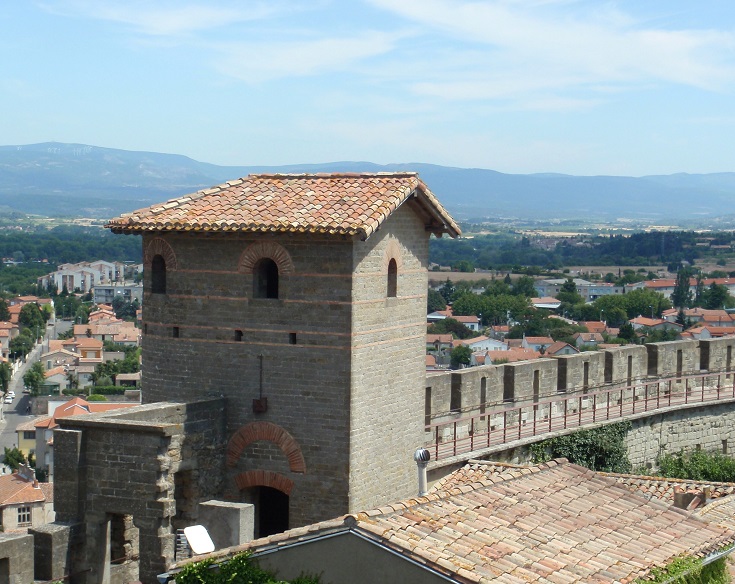 On the northern wall, U-shaped towers built by the Romans in the fourth century still stand. During the nineteenth century, restoration work on the towers was completed by under the supervision of Eugène Viollet-le-Duc, who was also responsible for the restoration of Notre-Dame and Saint-Chapelle in Paris. He added pointed cones covered in local slate to the top of the towers in keeping with the other towers. These, however, were replaced with flat tiled roofs during restorations in the 1960s.

For a fascinating tour detailing the evolution of the medieval city through the centuries, pay the small entry fee to access the old wall and château. There are several exhibits, a short film and a small museum to explore.

I have to confess that while I find Carcassonne a little ‘over-restored’ and commercialised, there is, without a doubt, plenty to keep you entertained for an afternoon. It is an exceptionally well-preserved example of a time long-passed and a must-do detour off the canal. 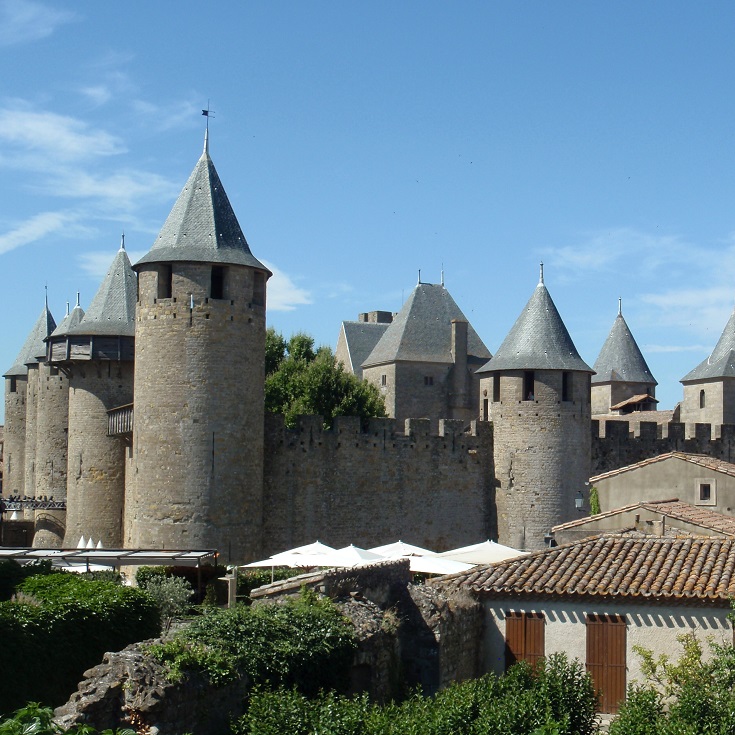 Turrets of the château inside the medieval city 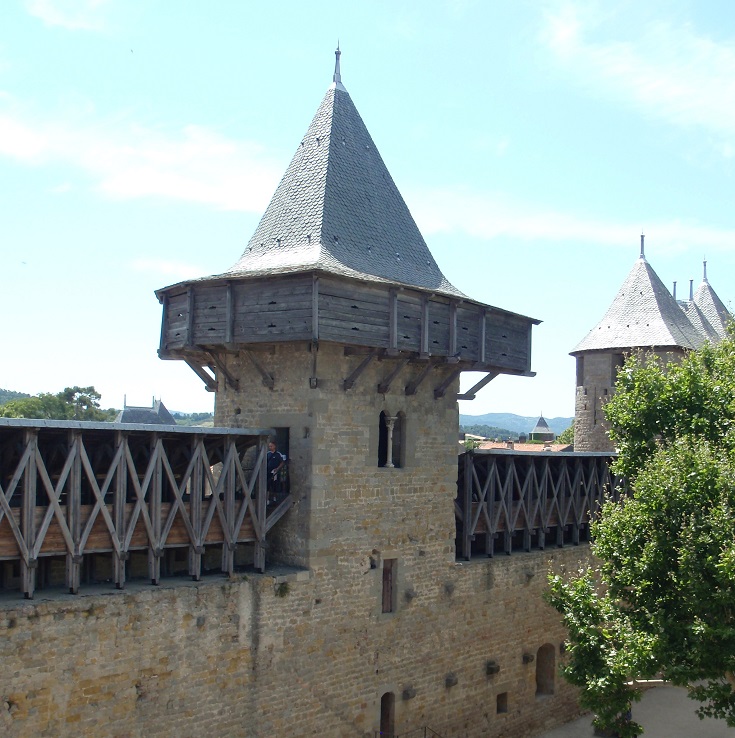 Guard’s walkway above the château 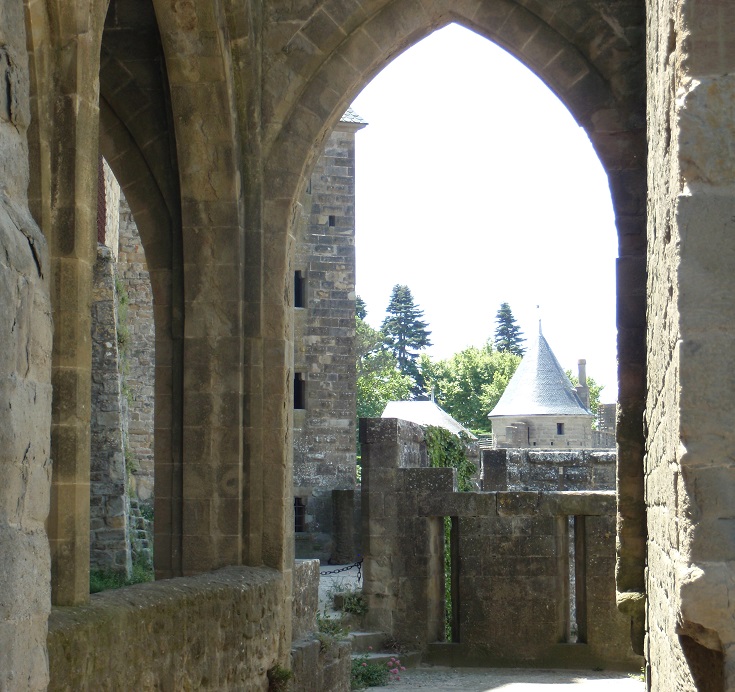 Views out over the surrounding countryside from a watch-tower

Which long-distance walk in France visits Carcassonne? The Midi Canal

Where is Carcassonne, France?  Find it on Google maps

Carcassonne is located 105 kilometres (65 miles) along the Midi Canal – a five-day walk from the starting point of Toulouse.

You’ll find my suggested itinerary for the five-day walk from Toulouse to Carcassonne here.

If you prefer to set your own agenda, I share the steps I take take to plan my itinerary on any long-distance walk (using the Chemin de Stevenson as a case study)

You’ll find the Tourist Office at 28 Rue de Verdun in the Ville Basse (lower city) and at Porte Narbonnaise in the Cité Médiévale. Opening hours for both offices are listed here.

Personally recommended:  Hôtel Le Donjon for the perfect location deep in the heart of the medieval city, charming rooms and reasonable prices. There is no breakfast room as the hotel is spread over several buildings but breakfast will be delivered to your room.

Where to eat in Carcassonne

There is an endless variety of cafés and restaurants competing for business in the medieval city. Take your pick from cheap and cheerful family options to romantic hideaways tucked away under a canopy of wisteria vines.

You’ll find a wide range of cafés in the lower city also, as well as bakeries and supermarkets.

Local produce markets are held every day except Sunday in the covered hall in Bastide Saint-Louis and on Tuesday, Thursday and Saturday mornings, fresh food markets are held at Place Carnot, both in the Ville Basse.

For something special, treat yourself to a meal at one of three Michelin-starred restaurants in Carcassonne. Prices range from very affordable to quite pricey, depending on whether you visit for lunch or dinner and choose the degustation or à la carte menus. Visit each website for menus, opening hours and all other details.