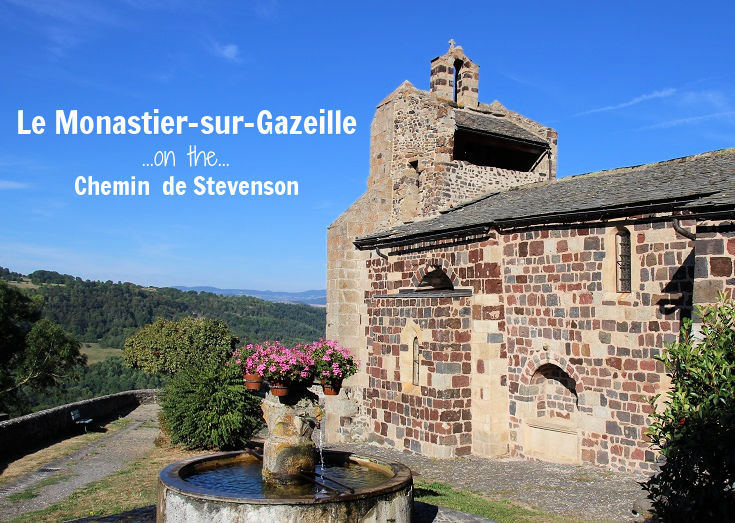 In August 1878, Robert Louis Stevenson left Paris and travelled south to the town of Le Monastier-sur-Gazeille. He described the country as “beautiful, rather too like the Highlands (of Scotland), but not so grand. The valley of the Gazeille below the village is my favourite spot; a winding dell of cliffs and firwoods with here and there green meadows.”

The scenery has changed little and Le Monastier-sur-Gazeille has lost none of its charm since the Scottish author’s arrival.

Records show that an abbey existed in Le Monastier-sur-Gazeille as long ago as the end of the fifth century. Dedicated to Saint-Chaffre, it provided shelter to a community of Benedictine monks who enjoyed a simple and mostly peaceful life, here on the slopes of the valley above the River Gazeille, for many centuries.

This is not Le Monastier-sur-Gazeille. It is one of many villages we skirted around on day 1 as we wandered, completely lost, from Le Puy-en-Velay! But it was a view, like this, of the village that captivated Stevenson, I’m sure!

From the later part of the eleventh century, the abbey came under Gregorian guidance and the focus changed to the growth of the spiritual empire.

Construction of the current abbey church began at this time, and continued until its completion two centuries later.

Widely considered by medieval art specialists to be one of the most beautiful churches in the region, it is also the second largest church in this part of France (smaller only than Cathédrale Notre-Dame in Le Puy-en-Velay).

Door to the Abbey church of Saint-Chaffre

In the fourteenth century, during the Hundred Years’ War, the English army swept through France, ravaging the area and occupying the abbey. In 1364, they built a château alongside the church. This was destroyed by fire during the Wars of Religion in the late sixteenth century, but was soon rebuilt and, for the next 130 years, was the seat of power for the ruling Sennecterre family—who also provided the abbey with several abbots!

Today the ground floor of the château houses the Musée des Croyances Populaires. Open every afternoon (except Monday) from the beginning of May until the end of September, the museum takes a light-hearted look at daily life from centuries past. 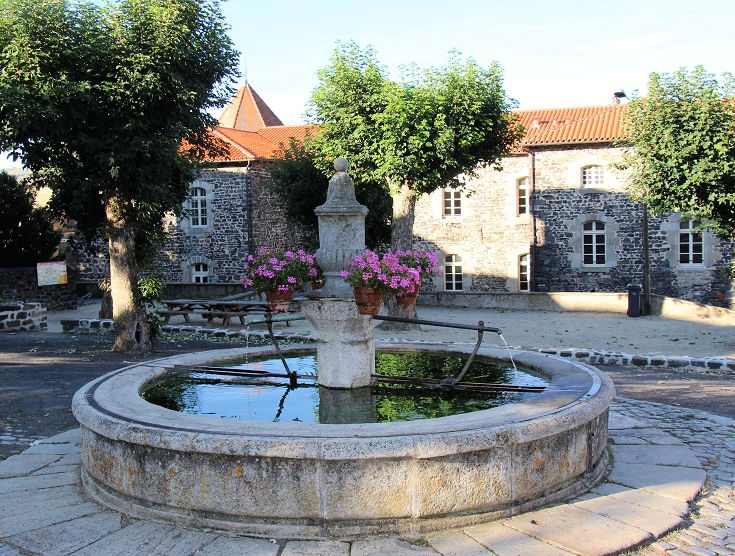 If you have time, two other museums in Le Monastier-sur-Gazeille are well worth a visit.

Behind the Tourist Office you’ll find Musée les Trésors du Monastier which examines the life of the monks residing in the abbey, and highlights the flora and fauna of the region. Exhibits include Byzantine fabrics from the tenth century, paintings from the fifteenth century, and a twelfth-century silver bust of Saint-Chaffre.

Musée de l’école du Monastier, on Avenue Laurent Eynac, transports the visitor back to the school days experienced by our grand-parents’ generation. Visitors are encouraged to dress the part and are provided with tunics and berets. The museum is open every day and is, as you may imagine, a popular excursion for local school children. 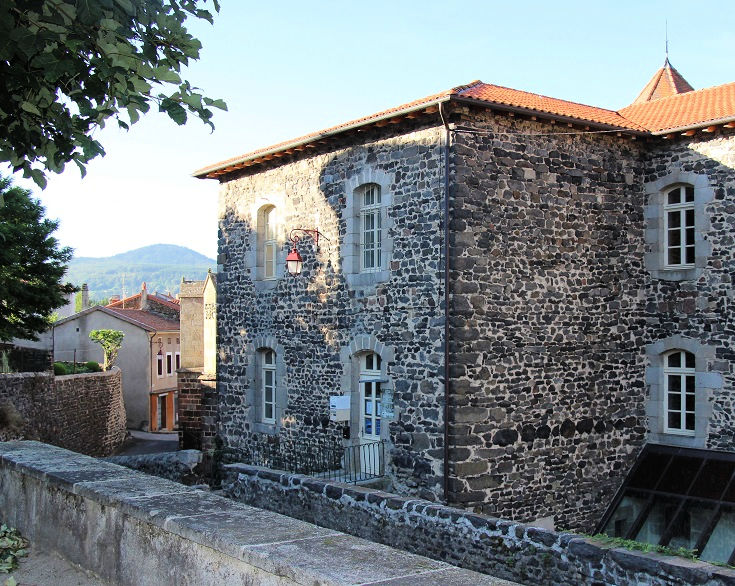 Guided visits of the interior of the Abbaye Saint-Chaffre leave from the Tourist Office every Tuesday and Thursday afternoon at three o’clock. Among the treasures you’ll see is the church organ, which dates from 1518, and is the oldest in Europe.

Every year in early August, Le Monastier-sur-Gazeille hosts a music festival. Concerts are held throughout the village—in the covered courtyard of the abbey château, the Abbey church of Saint-Chaffre, and in l’église Saint-Jean (pictured in the top photo). A selection of jazz concerts is held in the La Brass Room in Avenue Laurent Eynac. 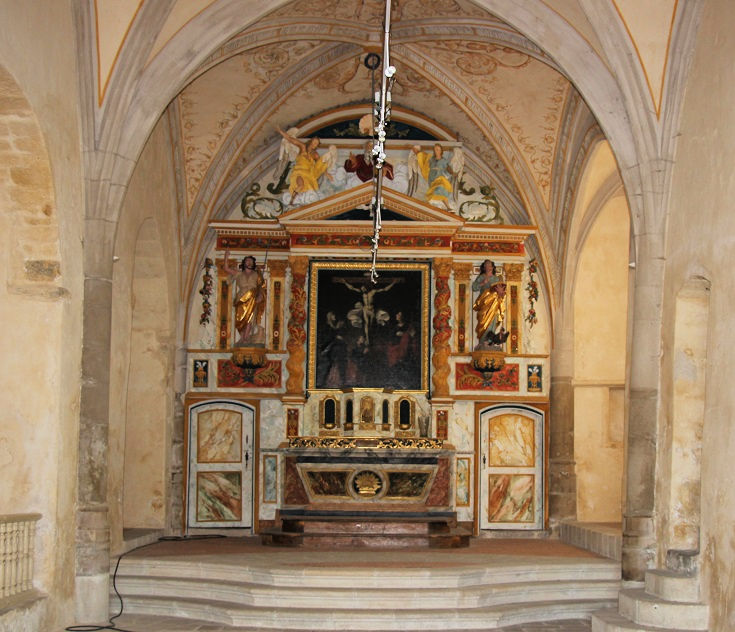 Robert Louis Stevenson arrived in Le Monastier-sur-Gazeille in August 1878, and spent the next four weeks making preparations for an eleven-day walk south through the Cévénnes to Saint-Jean-du-Gard.

Over several visits to Le Puy-en-Velay, the Scottish author commissioned a large, waterproof sleeping sack, lined with blue sheep skin, and a local saddler fashioned a leather pad with rings for attaching his belongings. 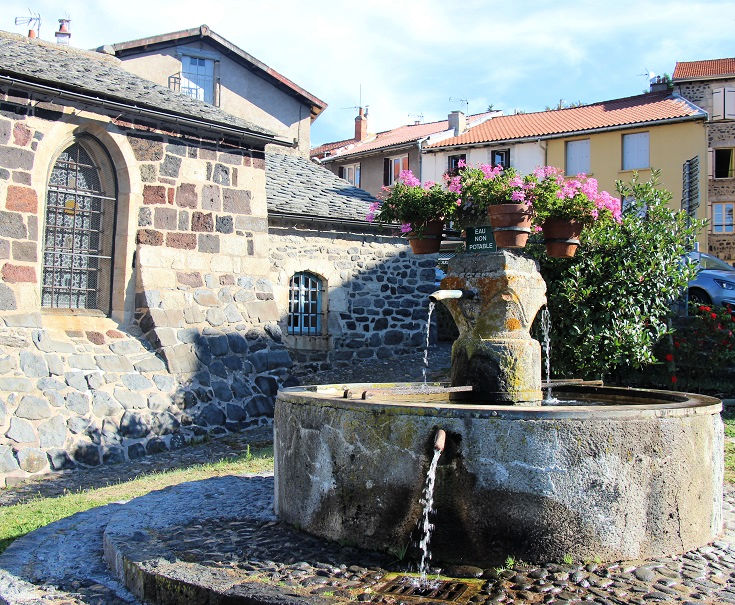 Water fountain beside Église Saint-Jean. Unfortunately, this one is marked ‘eau non portable’ and should not be drunk

It was here, in the market place in Le Monastier-sur-Gazeille, that Stevenson met with an old man, one of the townsfolk known as Father Adam, on 19 September 1878.

Stevenson was in need of a beast of burden to carry his sleeping pack, food supplies and other essentials needed for his journey south. Father Adam owned a small donkey mare that he used to pull his cart. 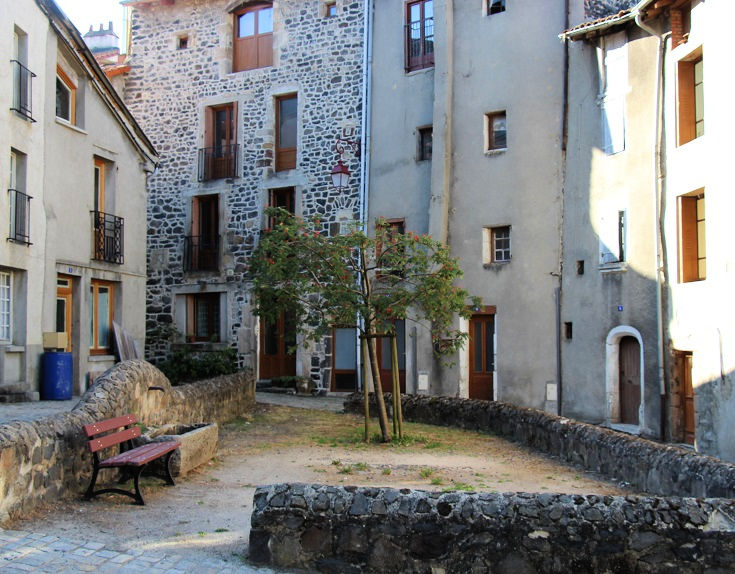 A quiet spot behind the abbey church

After some vigorous haggling, cheered on by the locals, Stevenson secured her purchase for the sum of 65 francs and a glass of brandy.

Three days later, on the morning of Sunday 22 September, and two months shy of his 28th birthday, Robert Louis Stevenson rose at five o’clock and packed his bags and donkey (who he had named Modestine), in preparation for his departure. Fifteen minutes after leaving town, Le Monastier-sur-Gazeille is a picturesque view on a distant hill

His plan for the first day of his journey was to walk as far as the shore of Lac du Bouchet and camp there for the night. 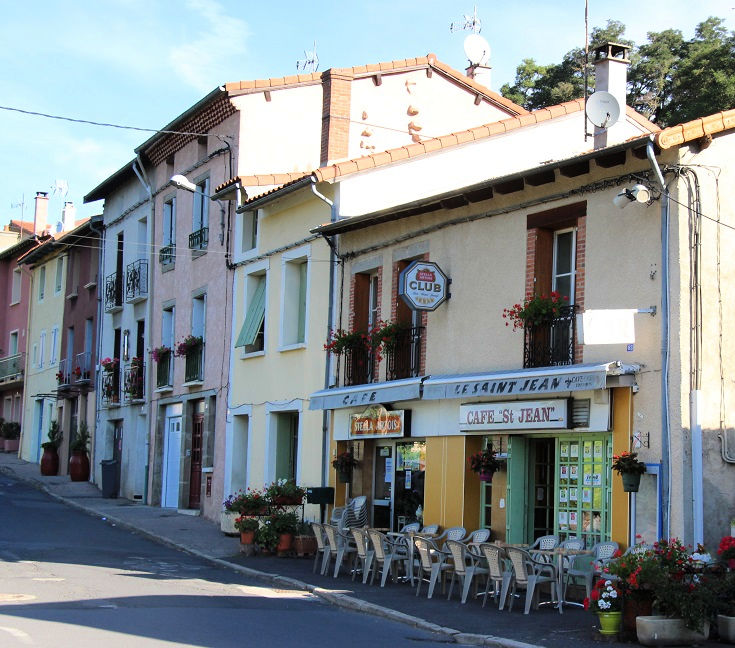 Stevenson wrote about his journey in “Travels with a Donkey”. His book is available to download (free) in several electronic formats from the Gutenberg Project.

Where is Le Monastier-sur-Gazeille, France?   Find it on Google maps

Le Monastier-sur-Gazeille is located 19.3 kilometres (12.1 miles) along the Chemin de Stevenson – a one-day walk from the starting point of Le Puy-en-Velay.

In 2017, Le Monastier-sur-Gazeille earned its place among France’s Petites Cités de Caractère. To qualify, a town must have a population of less than 6,000, be subject to Historical Monuments or Remarkable Heritage protection, include a sufficient number of buildings to give the appearance of a city, have served as the administrative or urban hub of the area, and uphold a commitment to preserving the architectural heritage of the town—a role that Le Monastier-sur-Gazeille has performed admirably for many centuries.

A small entrance fee applies to the three museums in Le Monastier-sur-Gazeille. Check each website for further details and to confirm opening hours.

You’ll find the program for the music festival here.

There is a wide range of options for an overnight stay in Le Monastier-sur-Gazeille. I can personally recommend Les Acacias for the clean and cheerful rooms and for the delicious dinner!

Where to eat in Le Monastier-sur-Gazeille

There are several cafés, three bakeries and a patisserie close to the centre of town and Les Acacias, which is located on the outskirts, serves lunch during the week and dinner every night (except Wednesday and Sunday evening during the low season). Ask for suggestions at the Tourist Office or find something that tickles your taste buds here.