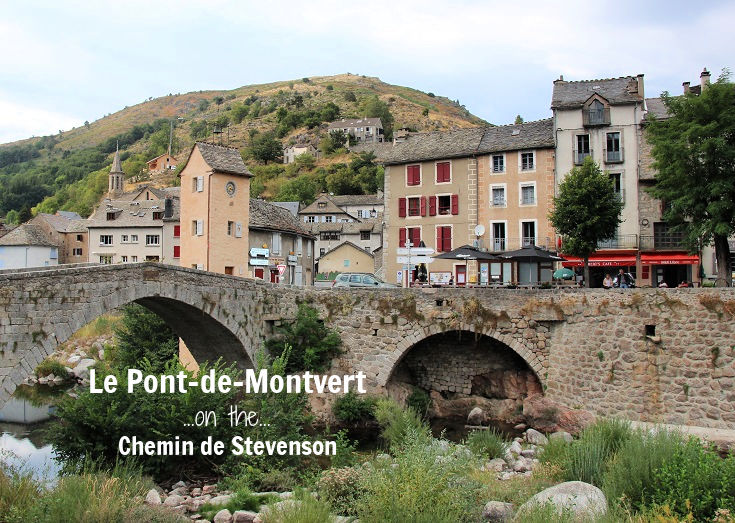 Protected on both sides by steep ridges, Le Pont-de-Montvert straddles the banks of the River Tarn as it meanders along the valley floor. The village is one of the prettiest towns along the GR70 Chemin de Stevenson, and is the perfect spot to spend a lazy afternoon relaxing in a café near the river.

For walkers following the footsteps of Robert Louis Stevenson on the GR 70, reaching the village marks the end of a day spent climbing—first, the slopes of Mont Lozère and soon after, the highest point on the Chemin de Stevenson, Col de Finiels. Robert Louis Stevenson reached the summit of Col de Finiels on the morning of Sunday 29 September, 1878, having spent the previous night camped in the woods beyond Le Bleymard.

He described the view “…into the hazy air of heaven, and a land of intricate blue hills beneath his feet.”

“These were the Cévennes of the Cévennes.” he noted, recalling stories of the legendary Camisards—local, untrained Protestant peasants who had waged a guerrilla war against the might of the French army 180 years earlier.

“In that undecipherable labyrinth of hills, a war of bandits, a war of wild beasts, raged for two years between the Grand Monarch with all his troops and marshals on the one hand, and a few thousand Protestant mountaineers on the other.” 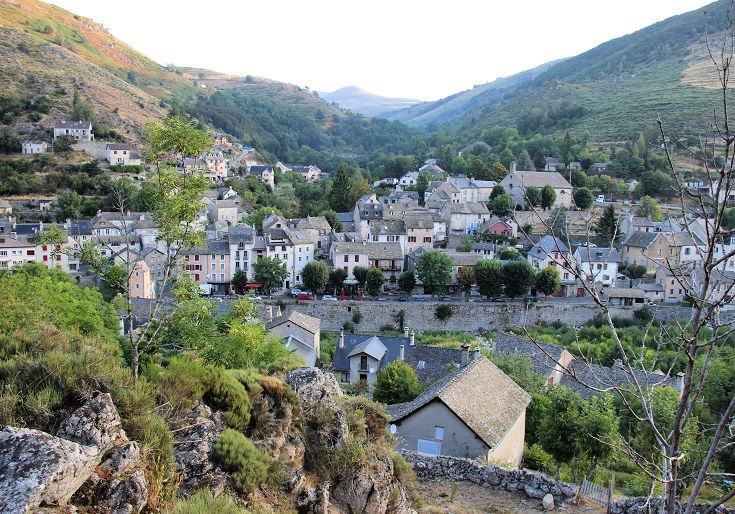 It was with great anticipation that Stevenson continued on over the hills to Le Pont-de-Montvert, where the war had begun.

The village of Le Pont-de-Montvert oozes with historic charm and stories of the war fought by the Camisards in the early eighteenth century are evident around every corner.

The buildings identified in Stevenson’s journal are easily identified and it is fun to stand at the entrance to the bridge and imagine an approaching mob of angry farmers, intent on freeing their brothers held captive within the tower walls. For more than a century before Abbot Langlade took up residence, the tower at the entrance to the bridge in Le Pont-de-Montvert served as a toll collection point, where farmers paid taxes for moving their sheep to and from the high pastures during the transhumance.

Le Pont-de-Montvert is a charming town and small enough to wander the streets without getting lost. If you prefer to follow a map, call in to the Tourist Office near the bridge and ask for un plan de ville.

The parish church is located on the main road, which leaves town and heads towards Florac. The spire is visible above the rooftops but the church has not been used as a place of worship since it was sold in 1826. Today, the building is unsafe and not accessible to the public. The austere façade of the Protestant temple

The Protestant temple stands on the hill on the northern side of the river. Built in 1828, its austere, solid façade and simple interior is in stark contrast to the delicate and elegant features of the Catholic church.

The Wars of Religion, fought between the French Catholics and the English Protestants, had ravaged France since 1562. The hostilities finally ended in 1598 when the French king, Henri IV, signed the Edict of Nantes, granting full civil rights, including religious freedom and protection to Protestants living in France. Although the truce worked well for a time, it began to unravel thirty years later when Henri’s grandson, Louis XIV, came to power. 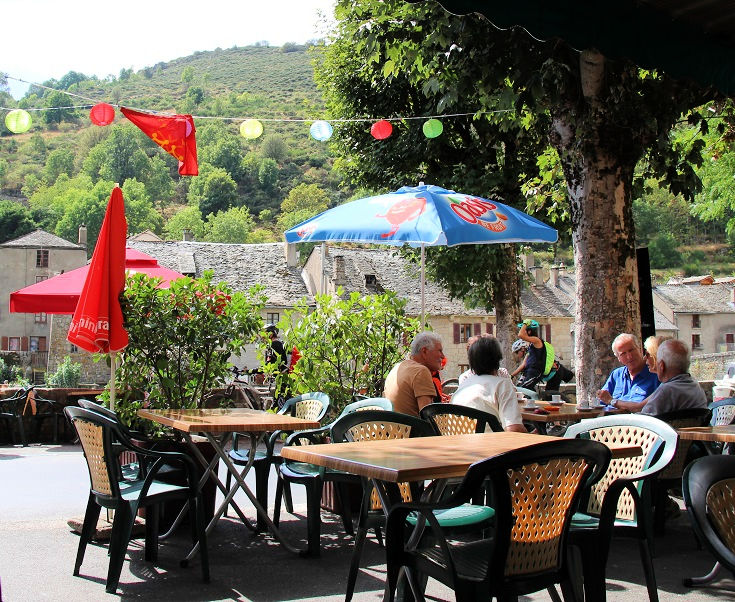 Following advice from the powerful Cardinal Richelieu, persecution of the Protestants began in earnest in 1665 and, in 1685, Louis XIV declared that the majority of Protestants had been converted and that the Edict of Nantes was no longer required. He replaced it with the Edict of Fontainebleau which removed all rights granted to the Protestants.  Protestant churches were burned, pastors and worshippers were captured, and many were killed.

Catholic Abbot François Langlade was dispatched to the Cévennes, taking up residence in the tower that guards the entrance to the bridge in Le Pont-de-Montvert. He arrived accompanied by soldiers and a troop of 75 missionary priests who set to work, forcing the Protestant villagers to attend Mass and to sign papers confirming their conversion to Catholicism. Those who resisted or attempted to flee to safer regions were held prisoner in the tower, where they were tortured with hot coals and by having the hairs plucked from their beards.

In July 1702, a group, consisting mostly of women dressed as men, was captured along with their guide as they attempted to flee into the mountains. This was the final straw for one of the Protestant resistors (known as Camisards)—Pierre Seguier—who declared that the time for submission had passed and it was now time to free their brethren and destroy the priests. 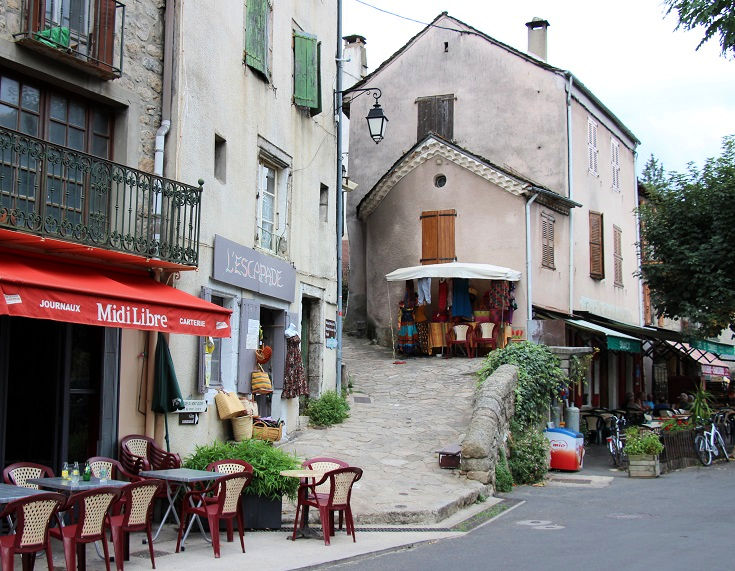 In Stevenson’s words (with minor liberties taken): “On the night of 24 July 1702, a sound disturbed Abbot Langlade as he sat in his prison-house at Le Pont-de-Montvert: the voices of many men raised in the singing of psalms drew nearer and nearer through the town. It was ten at night; he had his court about him, 12-15 priests, soldiers and servants; and now dreading the insolence of a commotion below his very windows, he ordered forth his soldiers to report. But the psalm-singers were already at his door, fifty strong, led by the inspired Seguier, and breathing death.

“Abbot Langlade ordered his soldiers to fire upon the mob. One Camisard fell at this discharge: his comrades burst in the door with hatchets and a beam of wood, overran the lower story of the house and freed the prisoners.

“Langlade’s men bravely held the staircase and when the Camisards were unable to gain access to the upper floors, they decided instead to burn the house with Langlade and his soldiers inside. The fire caught readily. Out of an upper window, Langlade and his men lowered themselves into the garden by means of knotted sheets; some escaped across the river under the bullets of the insurgents; but the Abbot himself fell, broke his thigh, and could only crawl into the hedge. A small store sells produce made from honey

“Langlade was dragged to a public place in the town where, one by one, Seguier first, the Camisards drew near and stabbed him. After each had taken his turn, they kneeled and sang psalms around the body until dawn.  The career of Seguier was brief and bloody. Two more priests and a whole family fell by his hand or by his orders, before he was captured, only a day or two later.

“On 12 August at Le Pont-de-Montvert, Seguier’s right hand was cut off and he was burned alive.”

From this time on, the war raged openly with both sides burning and massacring entire villages. But by 1705, many of the Camisard leaders had been captured and executed, and the momentum of the resistance was lost. Sporadic fighting continued throughout the Cévennes until the middle of the eighteenth century, but lasting religious freedom was not realised until the French Revolution in 1789.

(Thank you to Les Camisards website for a comprehensive history lesson.)

Diners enjoy the view from the terrace of Auberge des Cévennes

It was at Auberge des Cévennes that Robert Louis Stevenson was served his midday meal by Clarisse—a young waitress with “great grey eyes steeped in amorous languor”. Clearly impressed, and perhaps missing female company on his long journey, Stevenson described her in great detail. You’ll find a photo of her in the hotel restaurant.

Stevenson wrote about his journey in “Travels with a Donkey”. His book is available to download (free) in several electronic formats from the Gutenberg Project.

Where is Le Pont-de-Montvert, France?   Find it on Google maps

Le Pont-de-Montvert is located 163.6 kilometres (102.3 miles) along the Chemin de Stevenson – a nine-day walk from the starting point of Le Puy-en-Velay.

You’ll find the Tourist Office across the road from the tower at the entrance to the bridge. Call in to pick up a map of the village or download one here

There are several options for an overnight stay in Le Pont-de-Montvert, including–

Where to eat in Le Pont-de-Montvert

There are a couple of cafés located along the quai which follows the northern bank of the river, and the tall trees outside Café le Commerce provide welcome shade from the midday sun. On the far side of the river, lunch and dinner is served on the terrace of Auberge des Cévennes which offers a picturesque view of the stone bridge spanning the river.

The weekly fresh food market is held along the quai on Wednesday morning from June until September (and with a reduced number of producers between October and May).

For more practical supplies, you’ll also find a bakery beside Auberge des Cévennes and a grocery store on the northern side of the river.