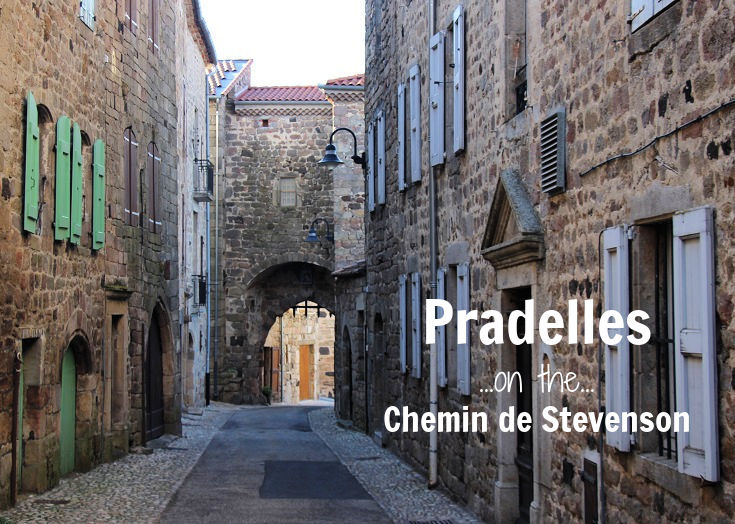 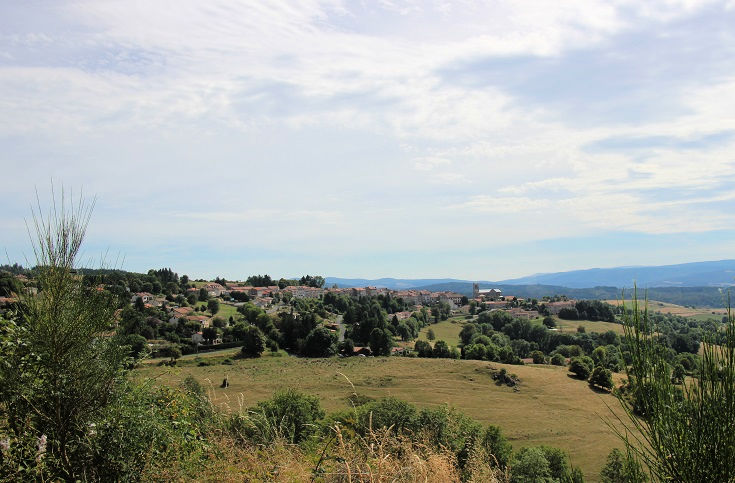 First views of Pradelles from the GR 70 Chemin de Stevenson

When Stevenson passed through more than a century ago, the village rated barely a mention in his journal—although I’m sure it was no less beautiful then!

He noted that he stopped here for lunch, but rejected his host’s suggestion to visit the Chapelle Notre-Dame, where a statue of the Madonna credited with performing many miracles graced the high altar.

After finishing his midday meal, Stevenson hurried on his way and made camp a few hours later in the woods beyond Langogne. 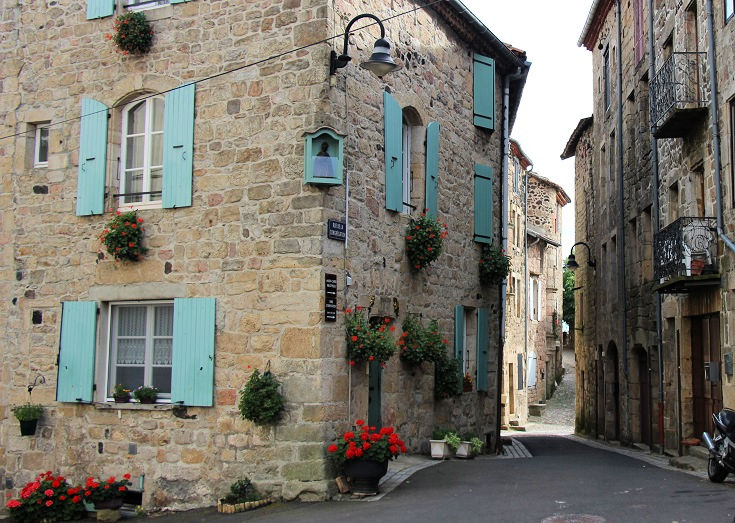 Since it is the only most beautiful village along the Chemin de Stevenson, Pradelles was a must-do overnight stay on my itinerary, and its charming stone houses and quaint alleys did not disappoint.

As you arrive in the centre of the village, call in to the Tourist Office and ask for the map of the town with fifteen points of interest marked. 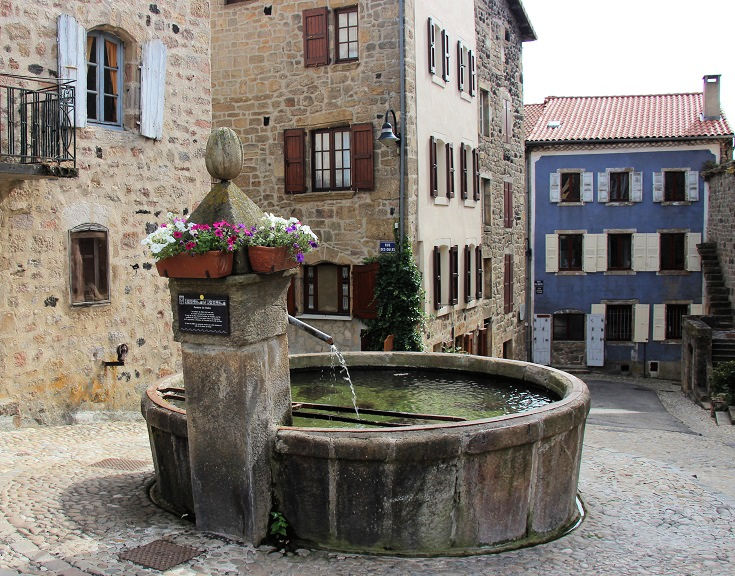 Water fountain near Place de la Halle. (Fill your water bottle – water that is not safe to drink will always be marked ‘Eau non potable’.)

One of the highlights is le Portail du Besset (pictured in the top photo). This beautiful stone arch and iron gate was once the southern entrance to the village. It was here that access was granted (or denied) to merchants travelling north along the Chemin de Régordane—a major trade route which had linked Le Puy-en-Velay to the south coast of France since the ninth century. 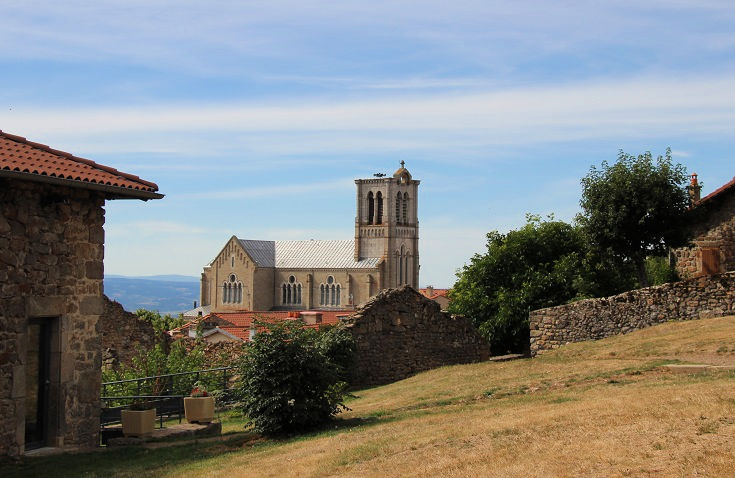 The imposing parish church in the heart of the village is a relatively modern addition. Constructed in the early twentieth century, it replaced a much smaller church which could no longer contain the growing population of almost 2,000 villagers.

Inside, the white walls and graceful columns provide a backdrop of light and grandeur; an ideal space to sit and admire the beautiful stained-glass windows. 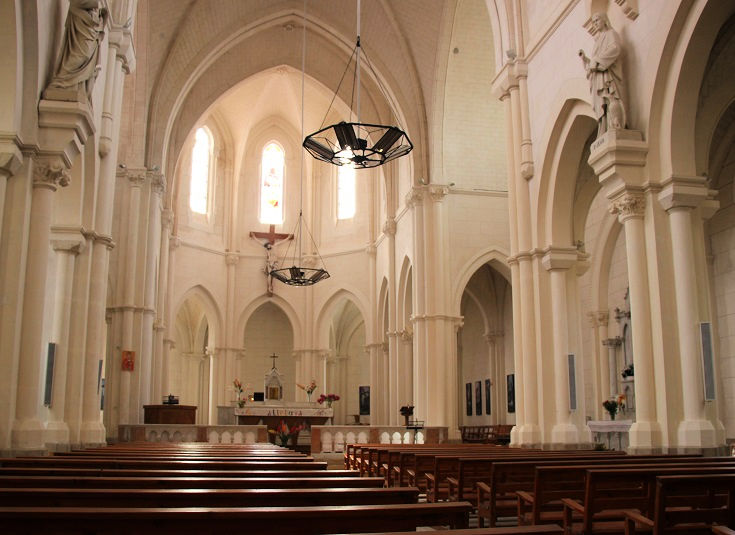 The interior of the parish church 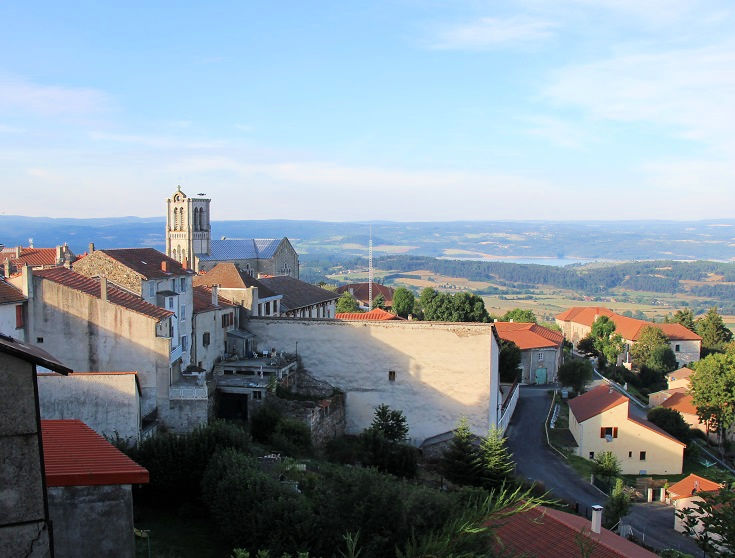 View from the window of Hôtel le Ponant, across the roof of the church to Lac de Naussac near Langogne

Chapelle Notre-Dame was built in the early 1500s to house a statue of the Virgin Mary that had been unearthed during construction work on a wall of the adjoining hospital. In 1586 a raging fire devastated this corner of Pradelles, and only the chapel emerged unscathed.

Two years later, when the English attacked during the Wars of Religion, the townspeople were victorious and the Madonna’s status as divine protector of the village was firmly established. In gratitude for her bestowed blessings, the chapel was replaced with a larger version in 1609. 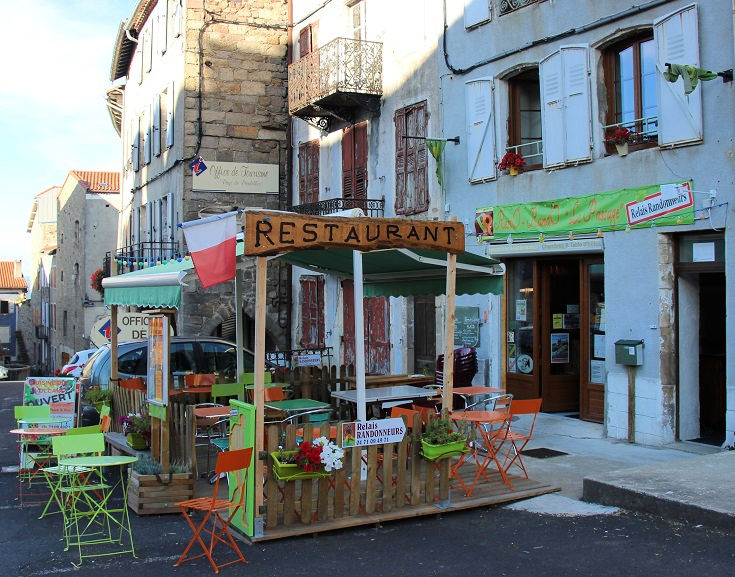 Where is Pradelles, France?  Find it on Google maps

Pradelles is located 63.6 kilometres (39.8 miles) along the Chemin de Stevenson – a three-day walk from the starting point of Le Puy-en-Velay.

Pradelles is the only ‘most beautiful village’ found along the Chemin de Stevenson, but you’ll visit many others along long-distance walks in France. Find them all here.

A map of the village with fifteen points of interest marked can be accessed from the website—Brochure Pays Cayres Pradelles. It is in French and difficult to read online—ask for a paper copy at the Tourist Office.

There is a wide range of options for an overnight stay in Pradelles. I can personally recommend Hôtel le Ponant, although it has changed management (and name) since my stay in 2016.

According to their website, it was at Auberge Cadenette, on the main road as you enter the village, (now a gîte and listed below) that Stevenson ate his midday meal before hurrying on to Langogne.

Where to eat in Pradelles

There are several cafés and a bakery in Place de la Halle. Hôtel le Ponant also serves a delicious dinner.