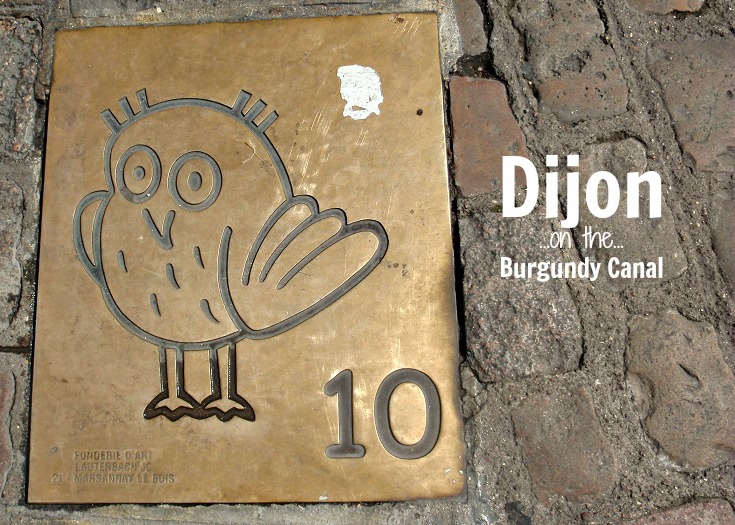 Long ago in the fifteenth century, before France was united under one king, this corner of France was ruled by the Dukes of Burgundy, who were based here in Dijon. It wasn’t until 1477, after the death of the Duke Charles the Bold, that the area came under French rule.

Given Dijon’s rich history and abundance of museums and interesting sites, it’s definitely worth taking a day or two to explore the city.

There’s a lot to do, so let’s get started!

There is no better way to get your bearings and explore Dijon than by following the Owl’s Trail (available from the Tourist Office on Rue des Forges near Tour Philippe le Bon). This handy booklet includes a self-guided walk that takes in twenty-two of Dijon’s historic monuments, with suggestions for a further three loops around the city. 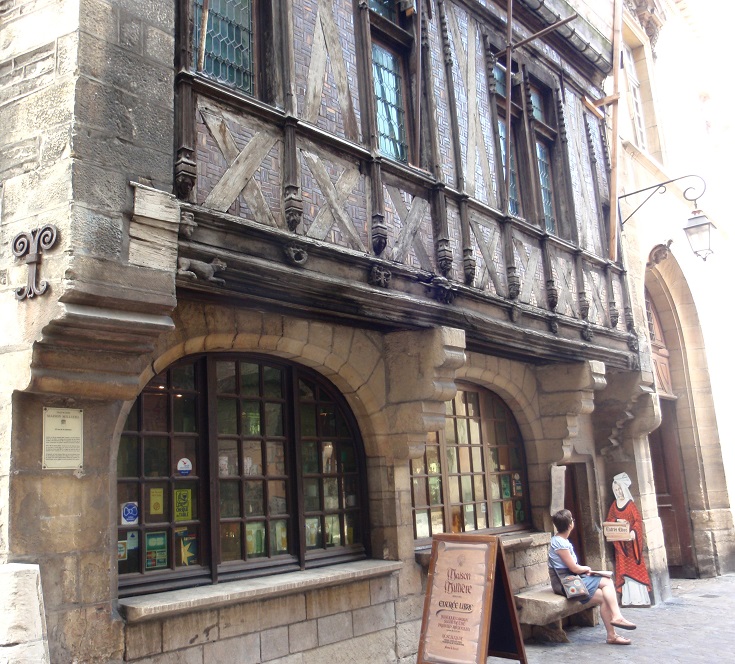 Some of the highlights of this walk are—

Porte Guillaume (stop 3)—a majestic eighteenth-century arch that was once the gate into town.

Maison Millière (stop 10)—this timbered house was built in 1483 and is typical of medieval housing throughout France, with a shop on the ground floor and housing for the shop-keeper and his family on the upper floor.

Palais de Justice (stop 18) and private mansions (stop 19)—the palace was built in the sixteenth century to house the parliament and is surrounded by stately mansions built for government officials.

MUST DO—on Rue de la Chouette (stop 9), it is considered good luck to rub the owl with your left hand and make a wish.

Explore the medieval heart of the city

The historic heart of Dijon is dominated by Place de la Libération—an enormous, semi-circular square, now lined with cafés, which was built to showcase a statue of Louis XIV.  Ironically, the statue was melted down to make canons during the French Revolution.

Opposite the square, is the Palais des Ducs et des États de Bourgogne (Dukes’Palace)—built in the fourteenth century but continually restored and enlarged over the following five hundred years. Today it houses the Town Hall and the Musée des Beaux Arts, where the tombs of the Dukes can be viewed. 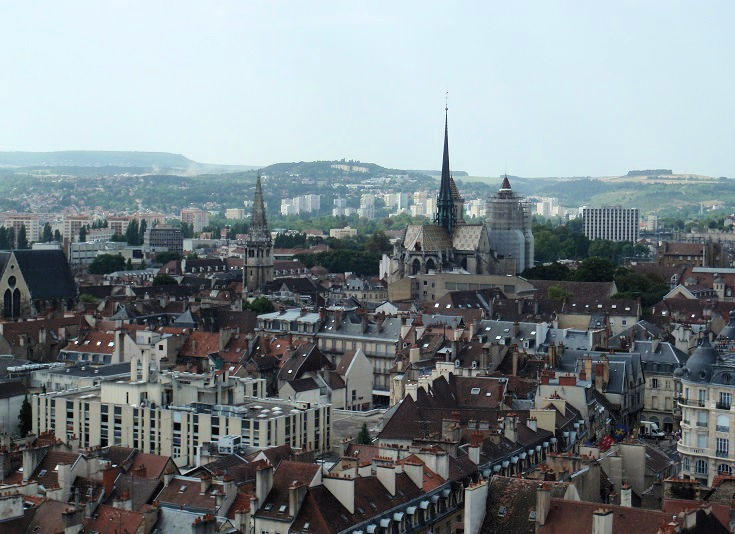 The rooftops of Dijon viewed from Tour Philippe le Bon

Alongside the Palais des Ducs and accessed via the Tourist Office below, is the 48-metre high Tour Philippe le Bon.

Climb to the top for magnificent views over the rooftops of Dijon and an aerial view of the medieval centre nestled in the heart of the city. 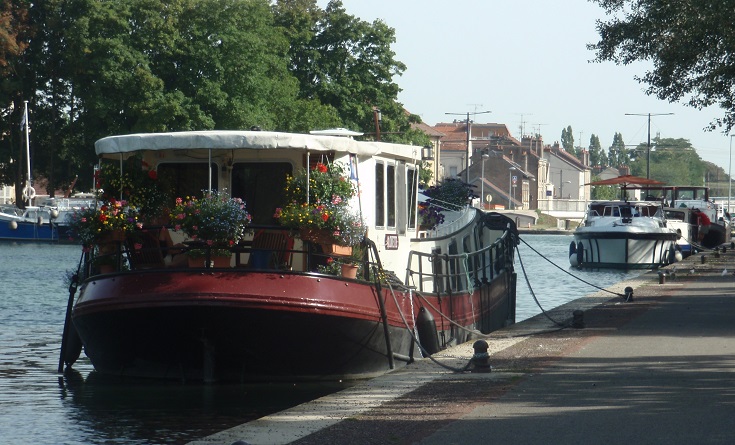 Take a stroll along the Burgundy Canal

If you haven’t arrived in Dijon by walking along the Burgundy Canal, now is the time to take a short detour to the outskirts of town and visit the port.

If you have a copy of the Owl’s Trail, the Moses Loop will take you in the right direction. Follow this path through the Jardin des Sciences de l’Arquebuse with its traditional, English and botanical gardens. When you reach the far side of the park, continue along the Moses Loop but instead of turning right, zigzag left, then right towards the canal. 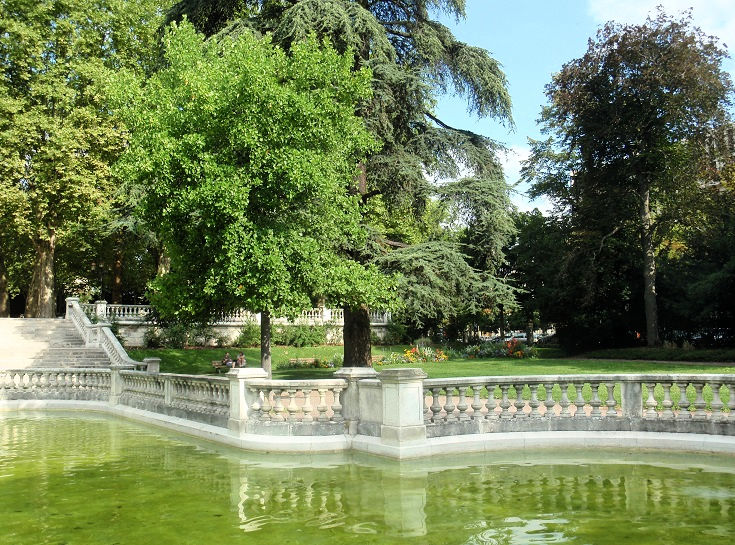 When plans for the Burgundy Canal were first drawn up in the sixteenth century, the intention was to connect Dijon with Saint-Jean-de-Losne, thirty kilometres (nineteen miles) to the east. From there, boats could reach the Mediterranean Sea via the Saône and Rhône Rivers, ensuring Dijon’s role as a town of great economic importance. Subsequent plans to extend the canal west to the Yonne River were discouraged by the ruling nobility, believing that Dijon would become just another town along the way.

Dijon’s economic importance may have diminished over the last few hundred years but it is certainly a most worthwhile stop on any tourist route. 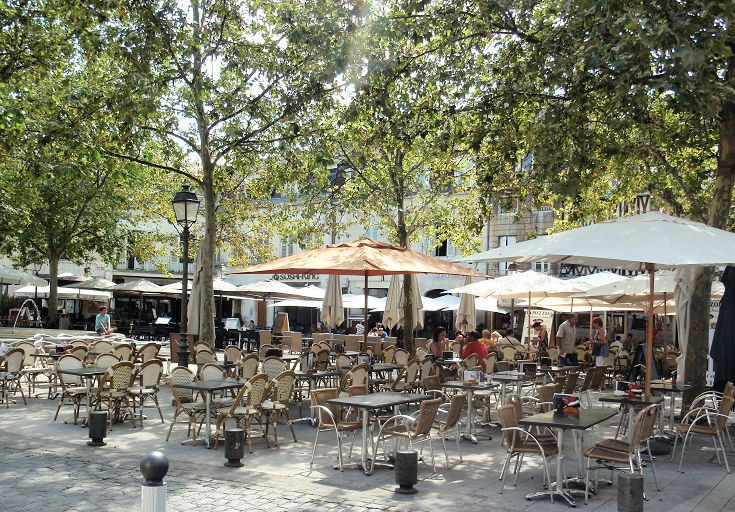 No visit to Dijon is complete without a visit to one, or more, of the nearby wineries. Several options are available for guided tours to vineyards located towards Beaune and Chablis.

And if your walk along the Burgundy Canal did not allow time for any detours, you’ll also find day tours which visit the Abbaye de Fontenay, Alésia or the ‘most beautiful village’ of Flavigny-sur-Ozerain. 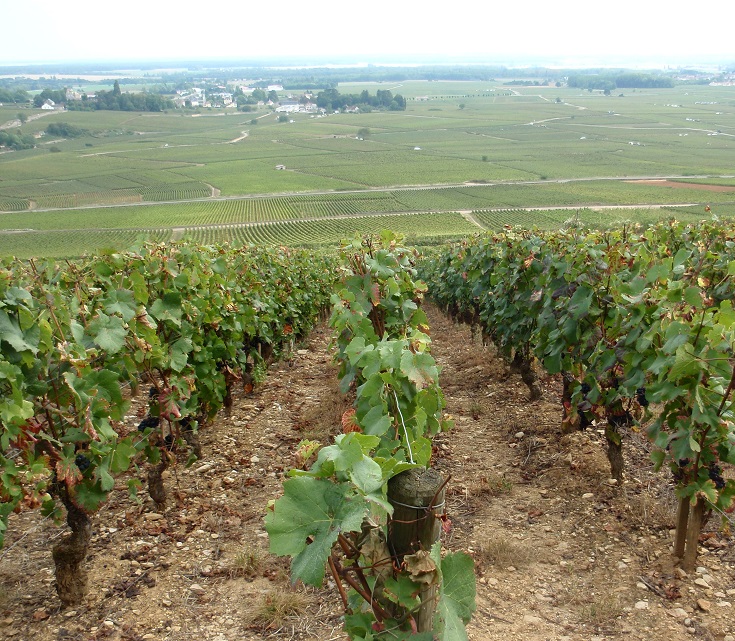 Vineyards in the Côte de Nuits, less than an hour from Dijon

Which long-distance walk in France visits Dijon? The Burgundy Canal

Where is Dijon, France?  Find it on Google maps

Dijon is located 212 kilometres (133 miles) along the Burgundy Canal. The canal winds along the southern edge of the town and the historic centre is an easy 15-minute walk from the canal.

If you are following my suggested itinerary (which you’ll find here), you’ll arrive in Dijon after twelve days of walking and cycling from the starting point of Migennes.

This relaxed pace includes rest days at Tonnerre, Montbard and Pouilly-en-Auxois, allowing plenty of time to visit the nearby attractions of Abbaye de Fontenay, Château de Maulnes, Château de Tanlay and Château d’Ancy-le-Franc and the ‘most beautiful villages’ of Noyers, Flavigny-sur-Ozerain and Châteauneuf-en-Auxois.

Bicycle hire is available at several Tourist Offices along the Burgundy Canal from VéliBourgogne. Bikes can be returned to any of the offices, so cycling some, or all, of the stages is very easy to arrange. In addition to here in Dijon, bikes can be picked up or returned at Migennes, Saint-Florentin, Tonnerre, Ancy-le-Franc, Montbard and Pouilly-en-Auxois.

In my suggested itinerary, I recommend cycling the last stage of the canal from Dijon to Saint-Jean-de-Losne. Saint-Jean-de-Losne does not have a bicycle return office and you will need to return the bike to Dijon but the two towns are well connected by train.

You’ll find the Tourist Office in the historic centre of Dijon at 11 Rue des Forges. Opening hours are listed here.

Authentica Tours and Côte de Nuits cycle tour offer tours of the nearby vineyards and both can be arranged from the Tourist Office in Dijon.

You’ll find dozens of hotels, ranging from 5-star luxury accommodation to clean but basic 2-star rooms, on the Destination Dijon website, and in the I Love Walking in France guidebook.

Listed below are four chambres d’hôtes (the equivalent of the English Bed and Breakfast) where you’ll find a warm, friendly welcome and personal service.

Where to eat in Dijon

There is a full range of cafés, bakeries, supermarkets and speciality food stores in Dijon – as you’d expect in any large town (population 150,000).

Dijon is positively packed with outdoor cafés and no matter where you are, a good meal is close by. Some areas to consider—

Place de la Libération—there are many cafés lining the square and offering good value meals throughout the day.

Place Emile Zola—today the square is crammed with cafés, but following the French Revolution, this was the site of public executions.

Place François Rude—a relatively new addition to the city (1904), this quiet corner near the medieval heart of town is a great spot to while away an hour or two.

Dijon is also home to four Michelin-starred restaurants. If you are looking for something special, choose from –

Prices range from very affordable to quite pricey, depending on whether you visit for lunch or dinner and choose from the degustation or à la carte menus.

Fresh food markets are held in Les Halles (Rue Odebert) every Tuesday, Thursday and Friday morning and all day on Saturday, but you’ll often a smaller speciality market in full swing somewhere in town on other days of the week. Ask at the Tourist Office for a list of markets during your stay.