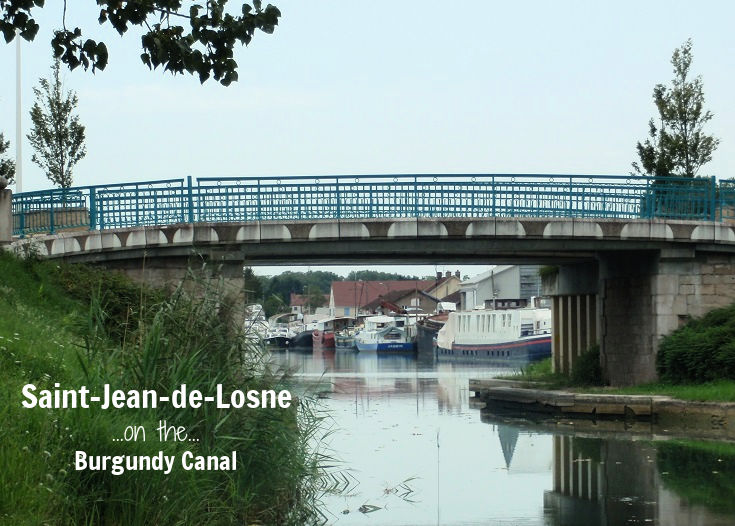 Thirteen days of walking—and cycling—is all it takes to make your way from Migennes to Saint-Jean-de-Losne following the length of the Burgundy Canal.

Along the way, you’ll have the opportunity to visit seven châteaux, eleven churches, an abbey and three of France’s most beautiful villages—all within easy walking distance or a shuttle bus ride from the canal. 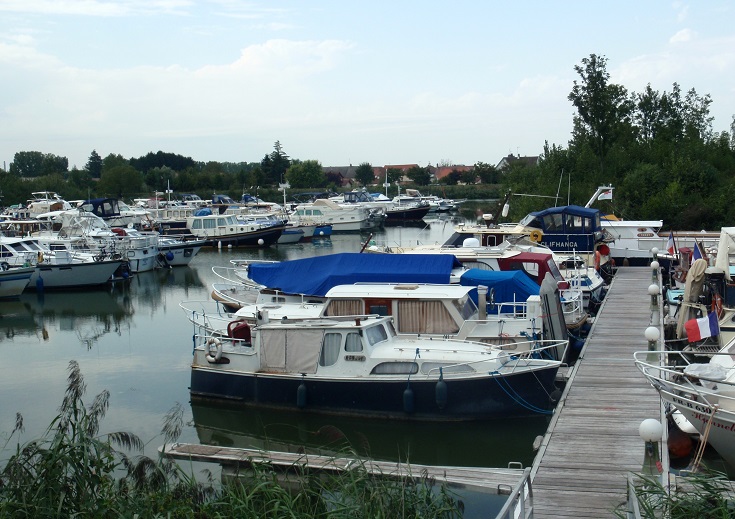 Whether you have arrived here on foot, on a bike, or even by boat, Saint-Jean-de-Losne is a lovely spot to spend a relaxing morning or afternoon.

Saint-Jean-de-Losne, which marks the eastern end of the canal, holds the interesting distinction (according to the Tourist Office magazine) of being both the smallest town (thirty-six hectares) in France and also having the largest inland port (twenty hectares).

Hundreds of boats moor here before heading west along the canal or along the Saône River towards the south of France. 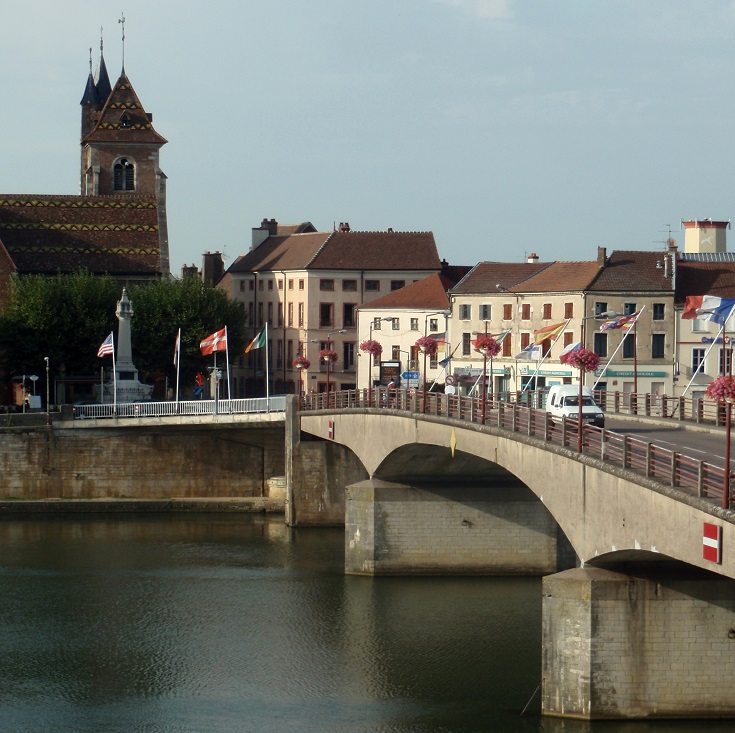 This position as a key transport hub has given Saint-Jean-de-Losne a commercial advantage ever since it was first settled in the seventh century. This also made the town a prime strategic target and in the early seventeenth century, the Austrian army cut a swathe along the Saône River, destroying villages and massacring the inhabitants. In 1636, they reached Saint-Jean-de-Losne but were held at bay by the villagers for eight days until help arrived from the French army. Following this belle défense, as it is known, King Louis XIII granted the town an exemption from paying taxes, which continued through until the French Revolution in the late eighteenth century.

Maps of the town are available from the Tourist Office, which is located in the seventeenth-century Hôtel de Ville. On the first floor, an exhibition of art work and a monument commemorating the siege of 1636 is open to the public and you’ll also find a small formal garden at the back of the building. 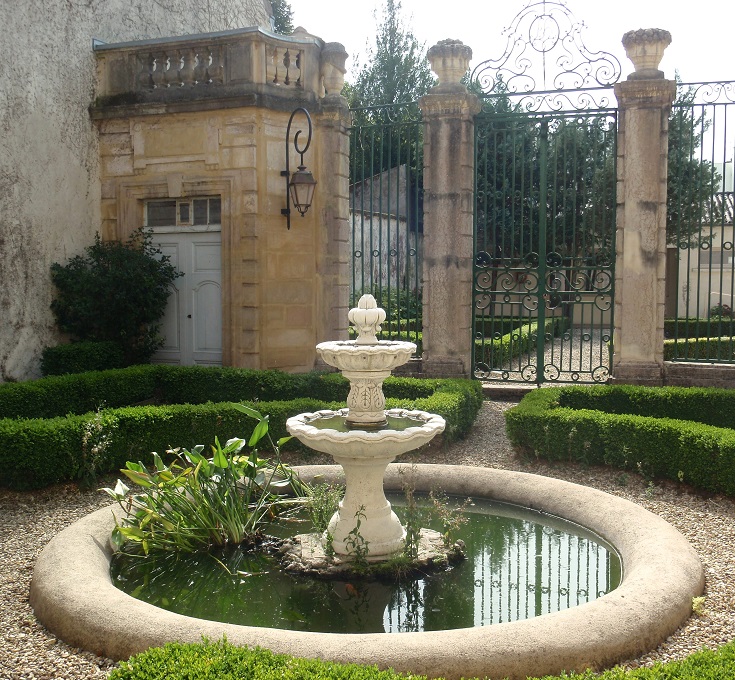 Tucked away behind the Tourist Office is a small formal garden

The sixteenth-century church dedicated to Saint Jean-Baptiste sits between the Tourist Office and the river. Inside, the red marble pulpit dates from 1604 and the church also displays a flag and sword from the siege. The organ, built in 1768, has been preserved in close to original condition and is classified as an historic monument. It is still played during church services and concerts. 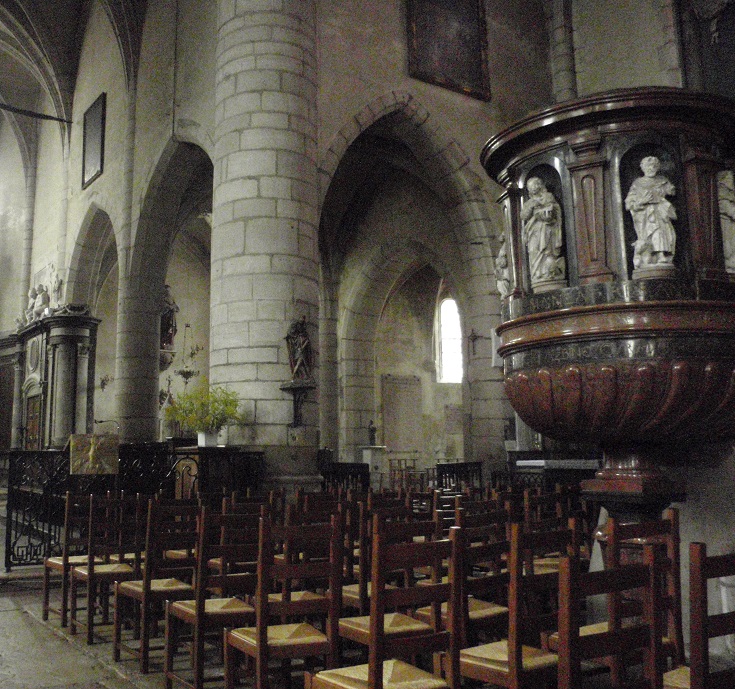 Dating from the fifteenth century, La Maison des Mariniers on Rue de la Liberté is one of the oldest houses in town. The house now contains a museum – Le Musée de la Batellerie – which displays photographs and artefacts relating to life on the river and the canal.

On the third weekend in June, la Fête de la Batellerie is held in Saint-Jean-de-Losne—a festival where the boats are brightly decorated and a ceremony is held to bless the fleet.

If you have not yet experienced travelling through a canal lock by boat, Vagabondo has a variety of cruises throughout the day that will give you a taste of life on the canal (without the hard work).

Between Dijon and Saint-Jean-de-Losne, the towpath is straight and exposed to the elements for much of the way 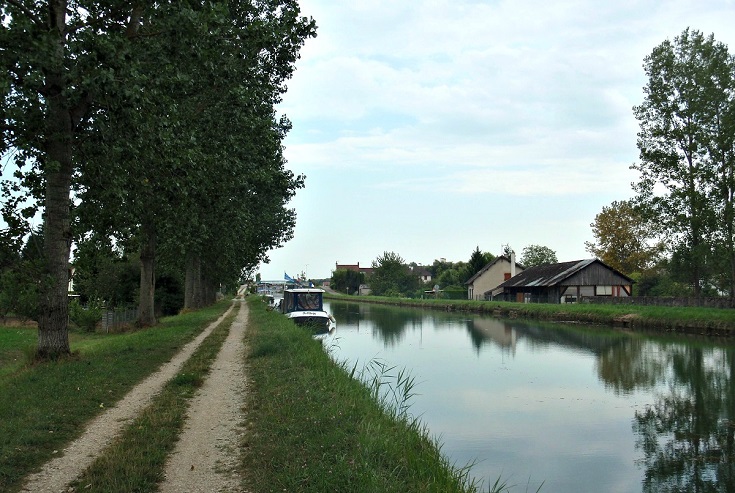 For the last twenty-seven kilometres (seventeen miles) from Dijon, the canal towpath is open and exposed, offering little shelter from the French summer sun. The engineers who designed this path appear to have drawn a straight line on the map and carved the shortest possible route between the two towns.

If you are pressed for time, it can be tempting to skip this last day of walking and spend some extra time exploring Dijon. If you can ride a bike (which I can’t), I recommend renting a bicycle in Dijon and treating yourself to a leisurely cycle to the end of the canal. When you are ready to return the bike to Dijon, trains run daily between the two towns. 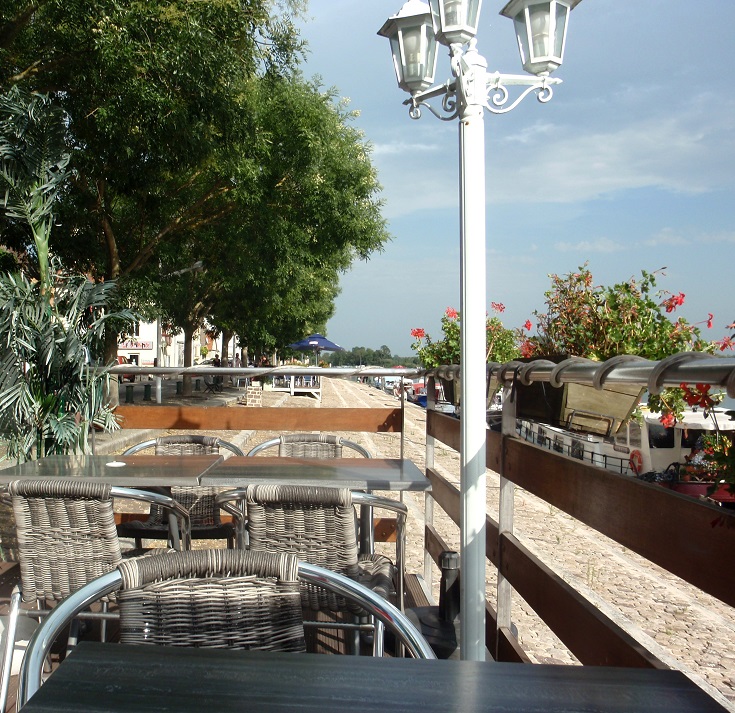 Which long-distance walk in France visits Saint-Jean-de-Losne?
The Burgundy Canal

Where is Saint-Jean-de-Losne, France?  Find it on Google maps

Saint-Jean-de-Losne is located 241.5 kilometres (150.9 miles) along the Burgundy Canal.

If you are following my suggested itinerary (which you’ll find here), you’ll arrive in Saint-Jean-de-Losne after thirteen days of walking and cycling from the starting point of Migennes.

This relaxed pace includes rest days at Tonnerre, Montbard and Pouilly-en-Auxois, allowing plenty of time to visit the nearby attractions of Abbaye de Fontenay, Château de Maulnes, Château de Tanlay and Château d’Ancy-le-Franc and the ‘most beautiful villages’ of Noyers, Flavigny-sur-Ozerain, and Châteauneuf-en-Auxois.

Bicycle hire is available at several Tourist Offices along the Burgundy Canal from VéliBourgogne. Bikes can be returned to any of the offices, so cycling some, or all, of the stages is very easy to arrange. Bikes can be picked up or returned at Migennes, Saint-Florentin, Tonnerre, Ancy-le-Franc, Montbard, Pouilly-en-Auxois and Dijon.

If, like me, you can’t ride a bike and thirty kilometres from Dijon is a little too far to walk, it’s possible to break this section into two days with accommodation available at Longecourt-en-Plaine and Brazey-en-Plaine.

Le Musée de la Batellerie is open every afternoon, except Monday, from May through to September.

I can thoroughly recommend Auberge de la Marine — for the clean, comfortable rooms and for the delicious dinner!

Where to eat in Saint-Jean-de-Losne

There are several cafés, bakeries and supermarkets in Saint-Jean-de-Losne.

For views over the water, head over to Quai Nationale. The stepped quay is now lined with cafés but, 200 years ago, this was a busy hub where boats loaded and unloaded their produce.

Each Wednesday morning, the food market in Quai Nationale offers a feast of fresh local produce.