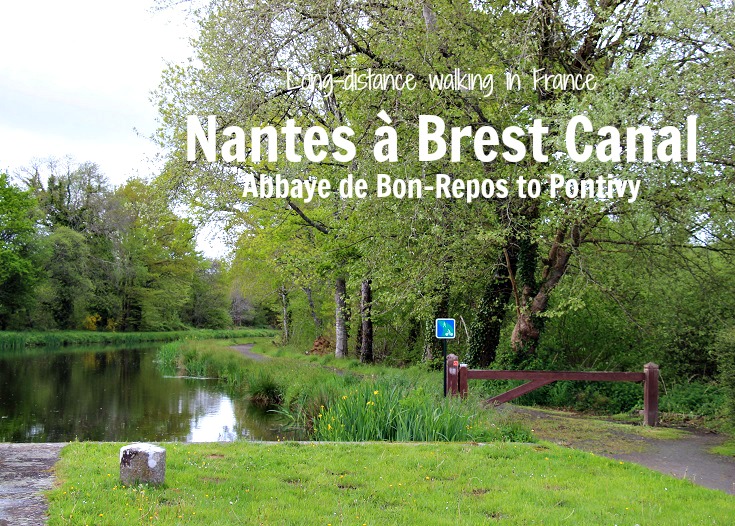 On the far side of Écluse 138, sit the majestic buildings of the Abbaye de Bon-Repos. From the other side of the canal, the abbey complex looks like any working farm – certainly the buildings are somewhat grander than most, but it’s easy to imagine oxen pulling the plough, monks tending to the vegetable garden.

Let’s head inside for a closer look!

Built here in the twelfth century, the abbey flourished for many centuries but fell into disrepair following the French Revolution. Some parts, such as the abbey church, are mostly in ruin.

During construction of the Nantes à Brest Canal, the abbey was used to house the construction workers and has recently undergone significant restoration work to bring it back to its former glory.

Every year, an artist in residence is invited to display contemporary art at the abbey. In 2015, this honour was awarded to Julien Lannou whose sculpture bursts from the upper floor of the cloister.

Plants and gemstones for sale at Abbaye de Bon-Repos

Back on the towpath towards Lac de Guerlédan.

At Écluse 137 Les Forges ou Bellevue the towpath alongside the canal ends and the path veers off towards the western edge of Lac de Guerlédan.

This man-made lake was created early last century when part of the canal was flooded to provide a water supply for a hydro-electric power station. Although the design included a ramp giving boats access to the dam and the canal on the far side, this was never built – bringing boat traffic along the length of the canal to a complete stop, unable to continue on.

Every thirty years or so, the lake is drained revealing the submerged locks and lock houses still preserved by their watery graves.

Walkers have a choice of three routes around Lac de Guerlédan. The GR341N and GR341S follow the northern and southern edges of the lake reasonably closely although thick vegetation often blocks the view of the water. A little further north, the Voie Verte de Bretagne (cycle path) provides an all-weather route through the town of Caurel.

Following on from a few days of intermittent rain, the GR341N and GR341S paths around Lac de Guerlédan became a boggy mess – extremely slippery and exhausting to walk along.

After almost an hour of walking with only glimpses of the lake (and covering less than a kilometre), I turned back and looked for the all-weather Voie Verte.

(If you do take this route after rain, remember to allow more time than usual to reach your destination.) 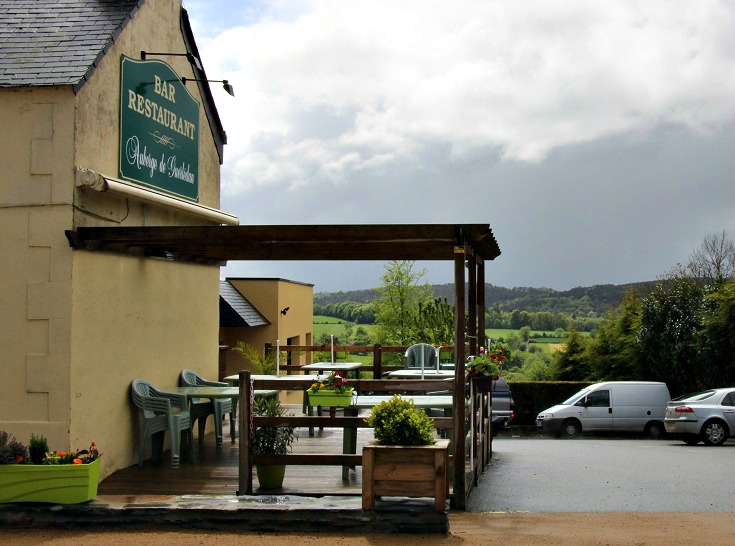 The all-weather Voie Verte (cycle path) around Lac de Guerlédan passes through the small town of Caurel with hotel accommodation and several cafés where you can sit and enjoy views over the countryside. 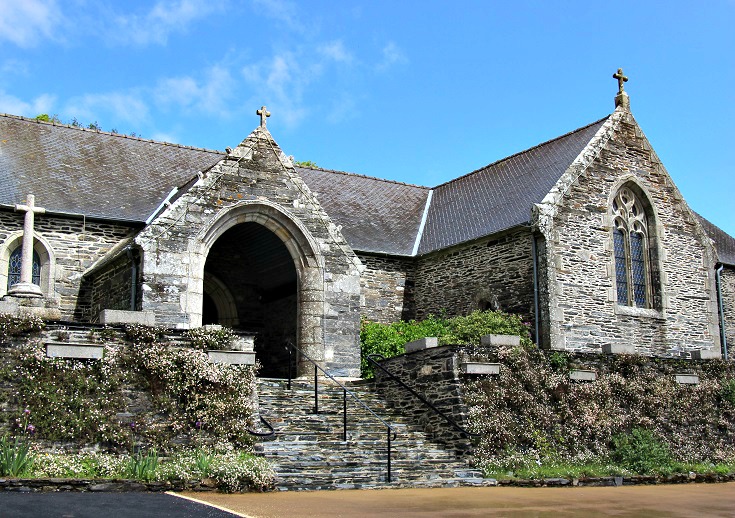 The Voie Verte, GR341N and GR341S all meet up again on the south-eastern edge of Lac de Guerlédan, a little to the north of Saint-Aignan. 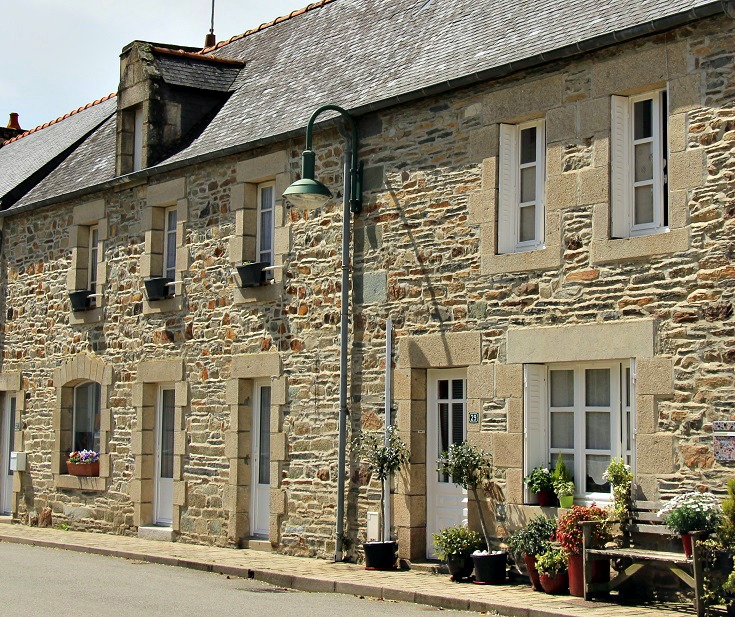 There is also a café, this row of rather pretty houses and, of course, a church to visit. 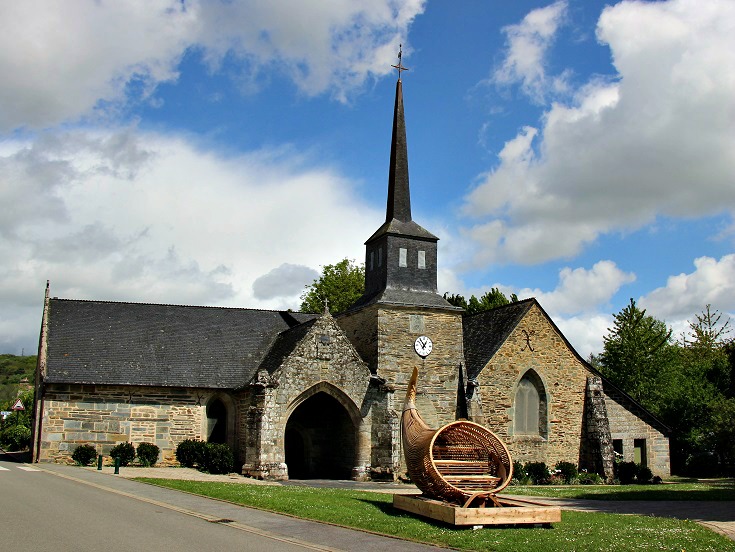 Near Saint-Aignan, the towpath rejoins the canal and continues on towards Pontivy.

Lock-house at Écluse 113 Stumo – now this looks like a well-loved home.

Not far past Pont de Lenvos, a ten-minute detour off the canal towpath takes you to the hamlet of Carmès—a cluster of farms and one very large fifteenth century church, Notre-Dame de Carmès, now classified as a historic monument.

Paintings around the main entrance to the church, Notre-Dame de Carmès, protected from the weather by the covered porch which was added in the sixteenth century.

Many mills, in various states of disrepair, are dotted along the Nantes à Brest Canal. Prior to World War I, when the canal was busy with commercial traffic, the mills harnessed the energy of the water flowing through the barrages. Today they are lonely, empty reminders of a bygone era.

Yesterday and today – Moulin de Guernal. Plaques like this one can be found all along the canal and are a wonderful way to bring the history of the canal to life! 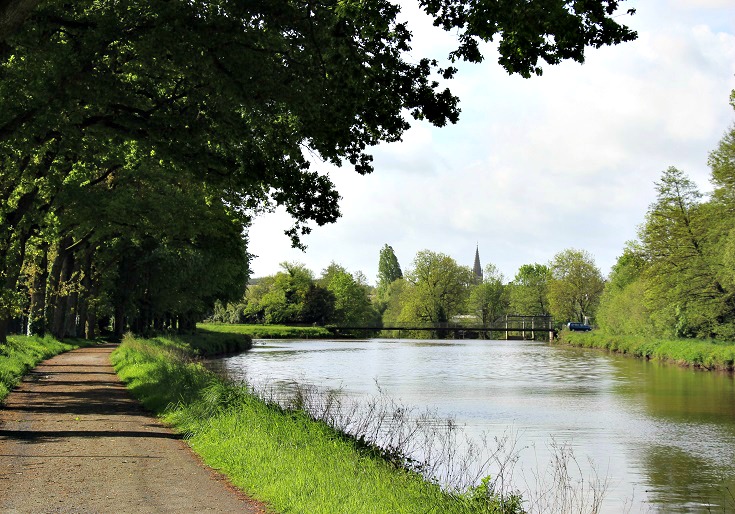 First glimpses of Pontivy where the Nantes à Brest and Blavet Canals meet.

Where to next along the canals of Brittany?

For something equally flat and easy to walk…

You might also enjoy the Burgundy Canal or the Midi Canal