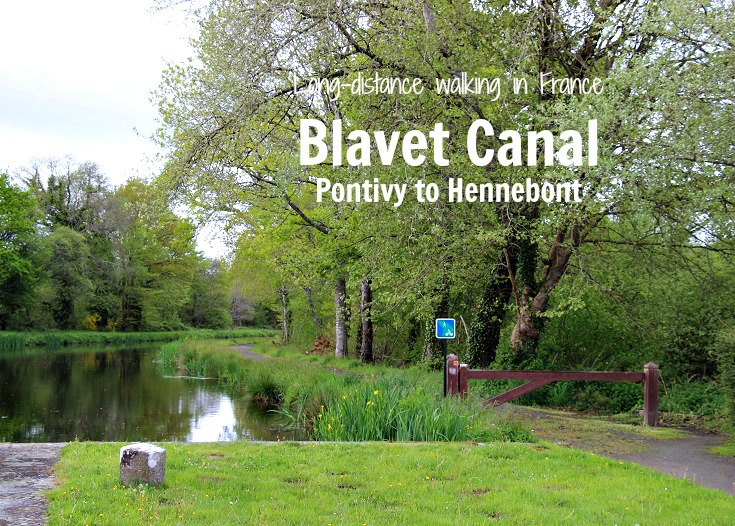 From Pontivy, the Nantes à Brest Canal continues east towards Nantes but for this walk, we’ll make a right turn and follow the Blavet Canal south to Hennebont and on to Lorient.

Before continuing on, Pontivy offers plenty of old-world charm, elegant buildings – and the chance to stock up on snacks, cash and bandaids! 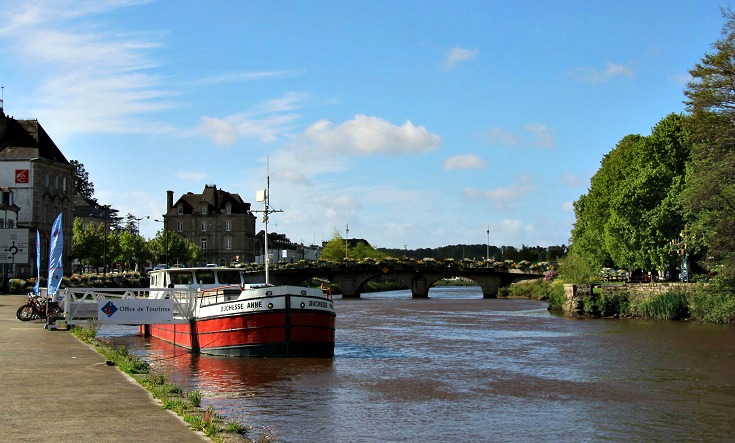 If you need a map or last-minute accommodation, call into the Tourist Office – housed in a former barge not long after you enter the town. 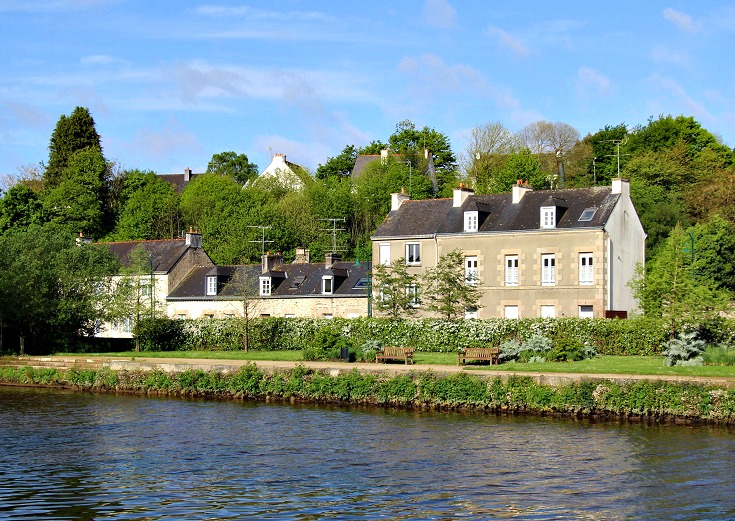 Everywhere in Pontivy is close to the water, so if you have an hour or two spare, grab a book and a coffee and relax in the sunshine. 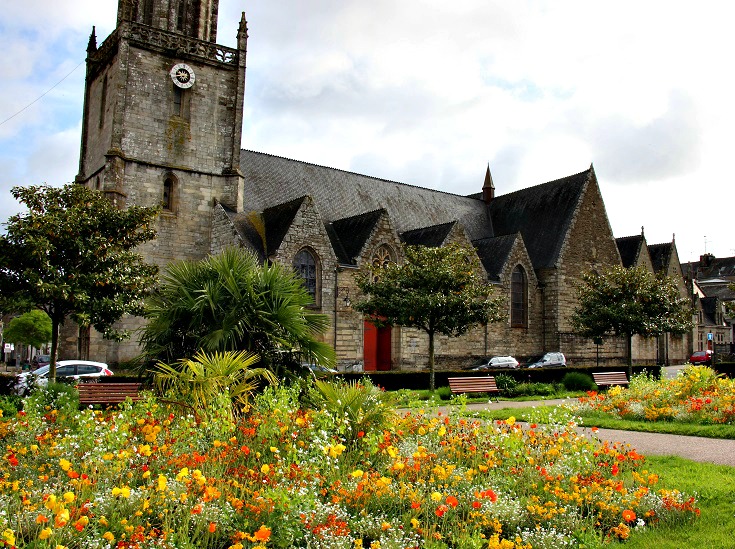 Springtime in the park beside the church in Pontivy. 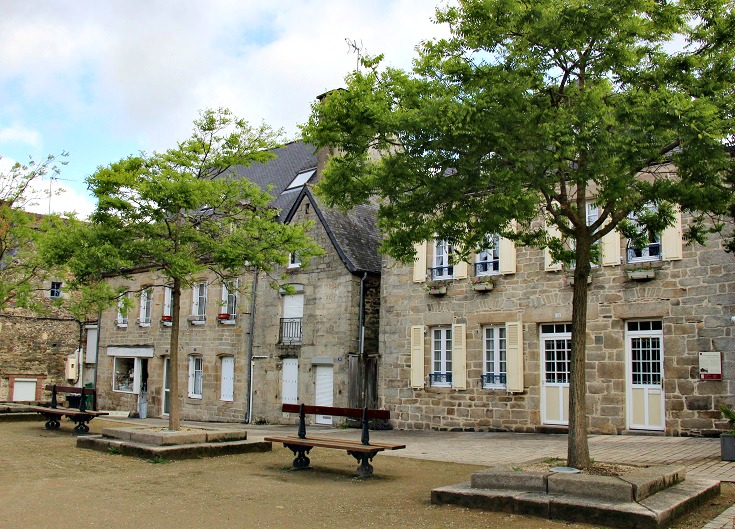 A row of terrace houses in Pontivy.

The main tourist attraction in Pontivy is the fifteenth century Château des Rohan.

The château is open to the public every day during the summer months. Unfortunately, when I visited in 2015, access was restricted to limited visits guided by the Tourist Office following the collapse of the southern wall. 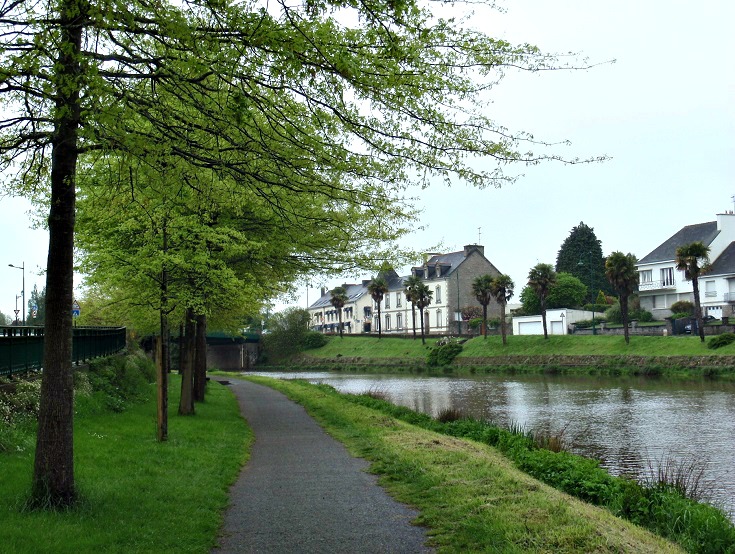 The Blavet Canal towpath through Pontivy – busy with joggers and cyclists on sunny days but deserted on this cool, drizzly morning.

An hour’s walk along the Blavet Canal from Pontivy is the hamlet of Le Gohazé.

There are picnic tables here – perfect for a drink stop but even more delightful and begging to be explored is the ancient chapel nestled among the trees right beside the canal.

The doors to the chapel in le Gohazé are locked and the cobwebs indicate they probably aren’t opened very often but I think even I would have been keen to attend Sunday School here.

Stone calvaire in the grounds of the chapel of le Gohazé. 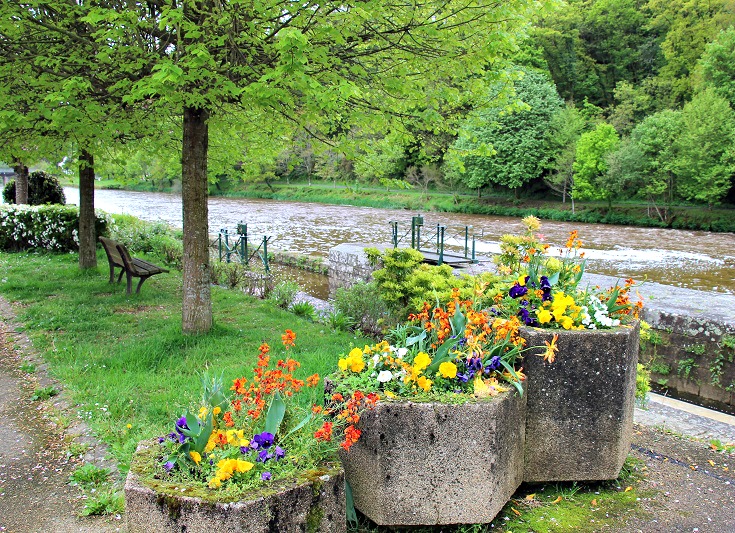 Arriving in Saint-Nicolas-des-Eaux. There are a few options here for accommodation or, if you find yourself here in the middle of the day, there are several cafés and a park to while away an hour or two and rest your feet. 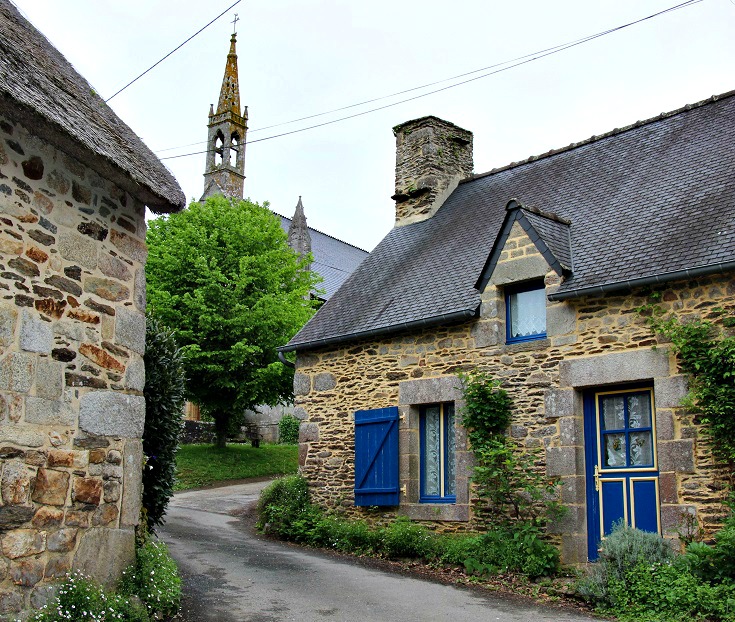 It seems that everything in Saint-Nicolas-des-Eaux is up the hill from the canal but when the streets are this pretty, who’s complaining? 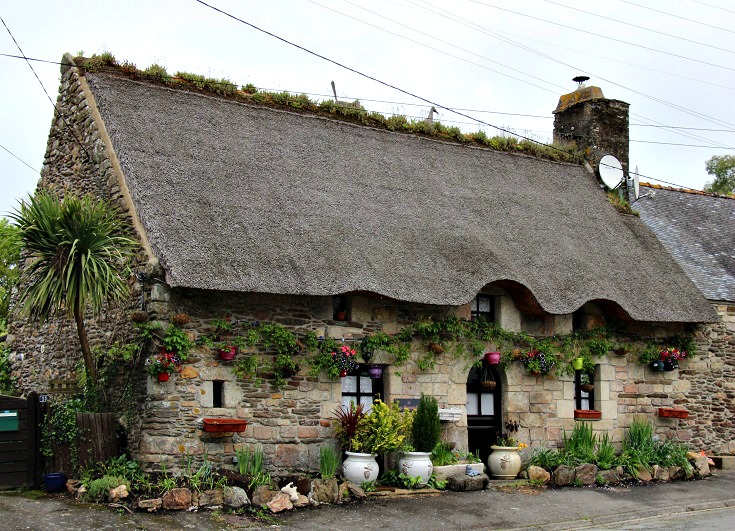 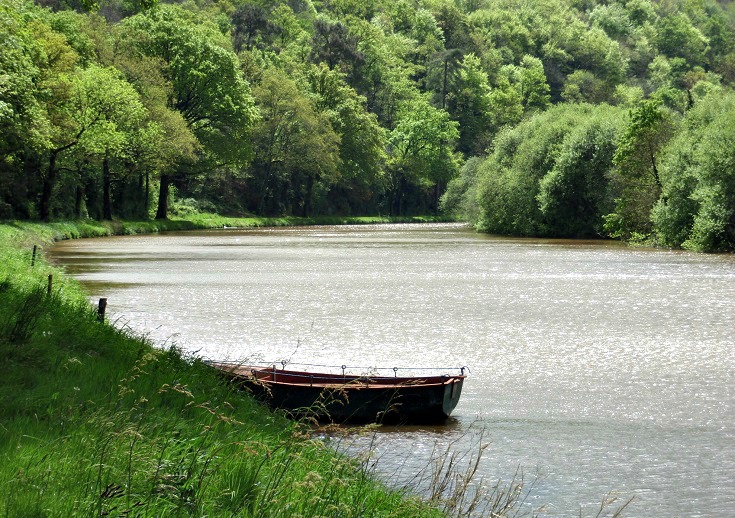 A quiet corner in the loop of the canal just after leaving Saint-Nicolas-des-Eaux. 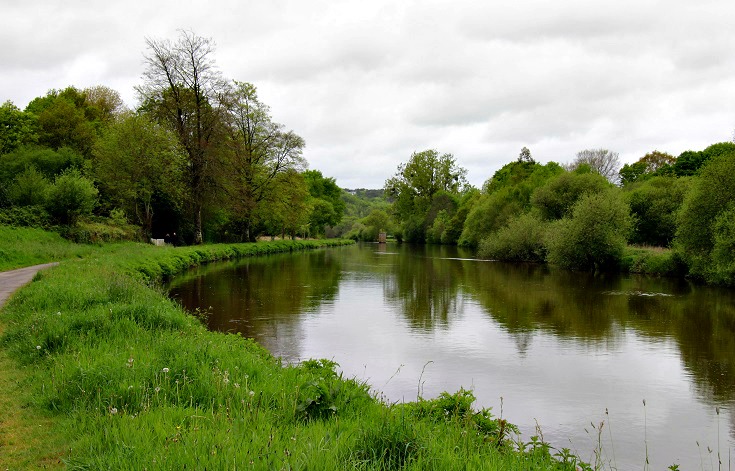 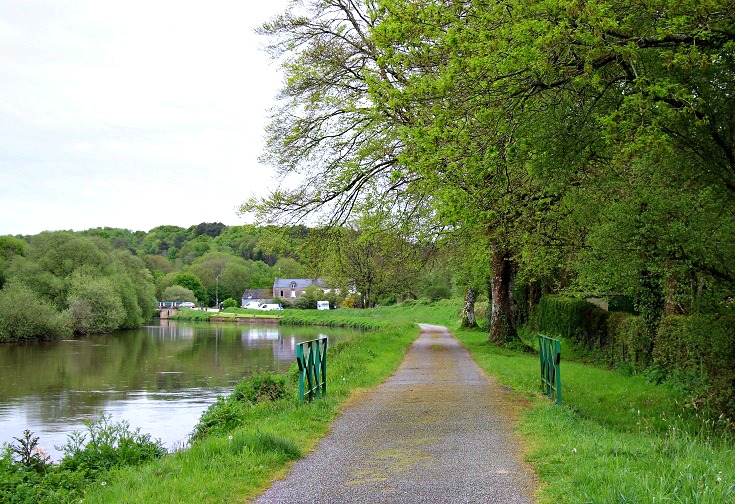 But this photo could have been taken at any of a thousand places along the canal and is the photo I felt I was taking over and over again along the length of both the Nantes à Brest and Blavet Canals.

I’ll admit that the canal is lovely and lush and green, and I’ve thoroughly enjoyed sorting these photos and reliving my time there…but, there is a sameness to the scenery. I confess I grew tired of this view. As I walked, it felt as though there was a long way to go to the next bend which I hoped would reveal…a different view. Alas, it rarely did!

That said, I wonder if I might have enjoyed this trip more if I’d cycled (of course, this is just dreaming as I can’t ride a bike, but you know what I mean!). 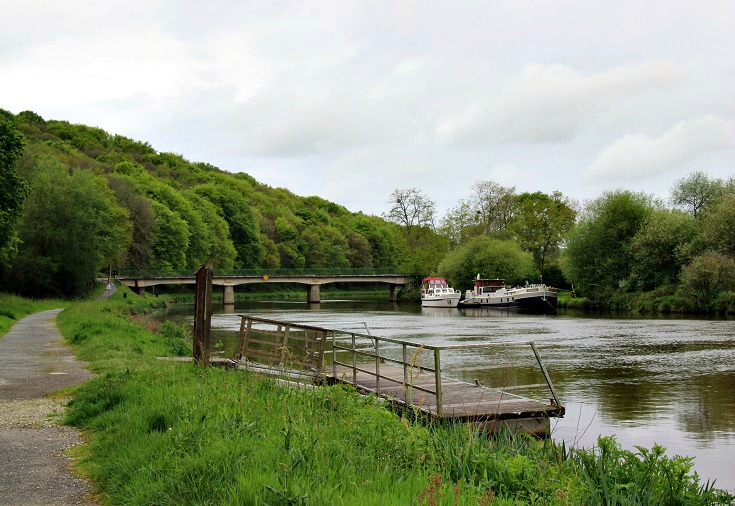 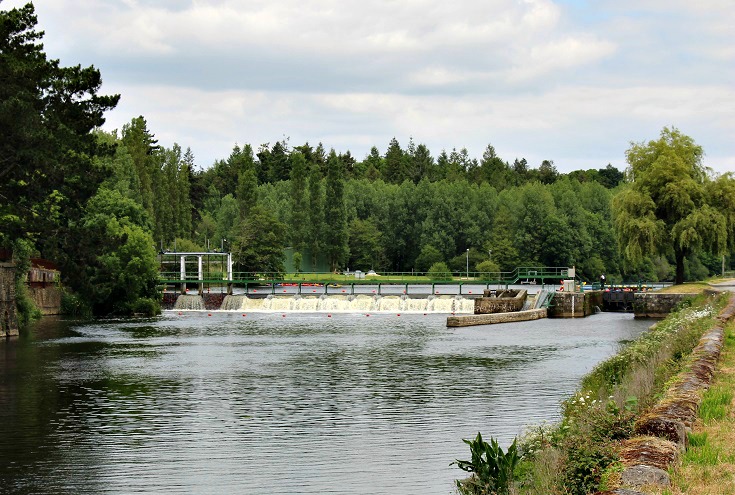 Just visible beyond the lock is a group of school students kayaks huddled in a tight bunch. I was wondering how they would change levels on the canal, since the force of the water filling the lock would topple any kayak, and arrived in time to see the last student dragging his boat up the ramp beside the lock. Of course! – although I’m sure that wasn’t its original purpose! 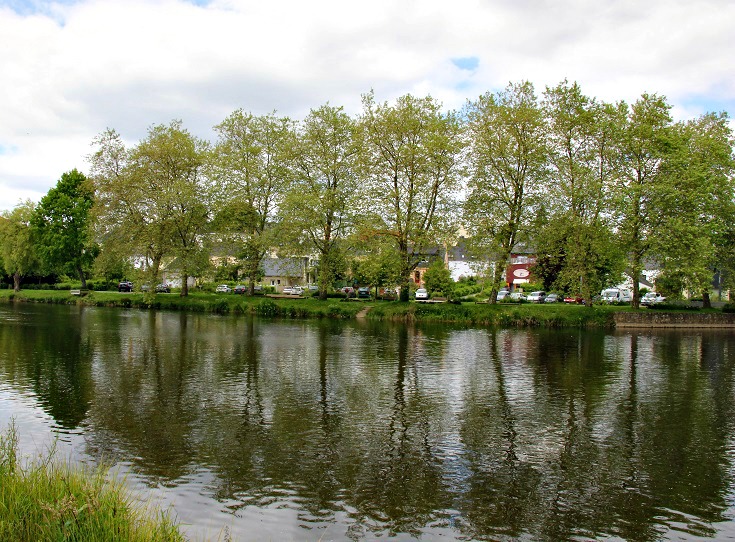 Reflections dancing on the water on the edge of Lochrist.

Écluse 26 Grand Barrage lined with beautifully preserved mill buildings – and looking even better, perhaps, than it did in the day! 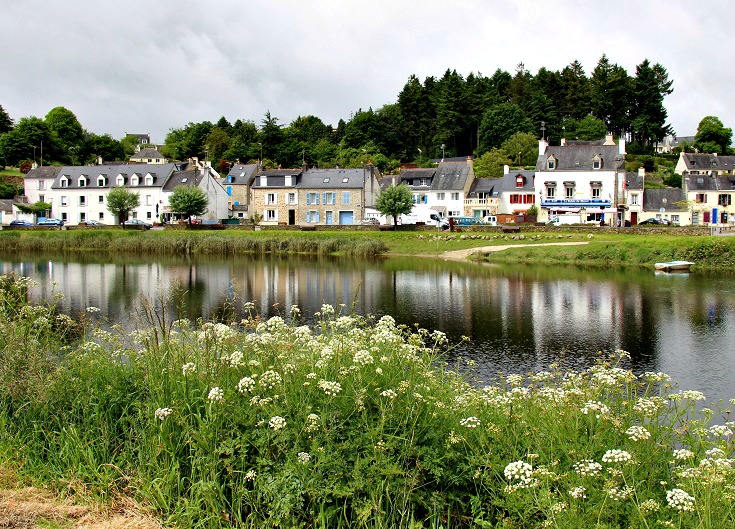 Approaching Hennebont and the end of our walk.

Hennebont is where the towpath ends. From here to the ocean at Lorient, the River Blavet is navigable and there are no more locks for boats to pass through.

It is possible to walk from Hennebont to Lorient but the path will take you through industrial zones and alongside a lot of freeways and is a less-than-inspiring way to finish the walk. (The bus will take you there also in around thirty minutes!) 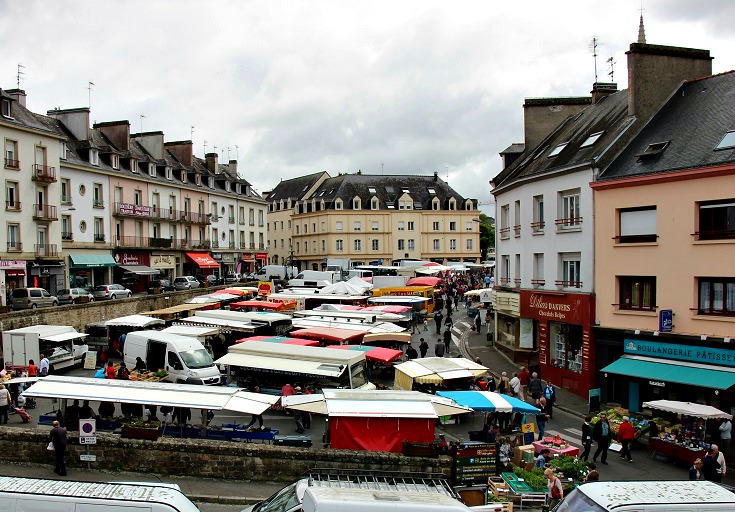 Thursday morning is market day in Hennebont and the town boasts one of the largest weekly markets in Brittany.

As well as the usual fruits and vegetables, local cheeses and honeys, there are dozens of clothes, handicraft and artisan stalls – time for some last-minute souvenir shopping! 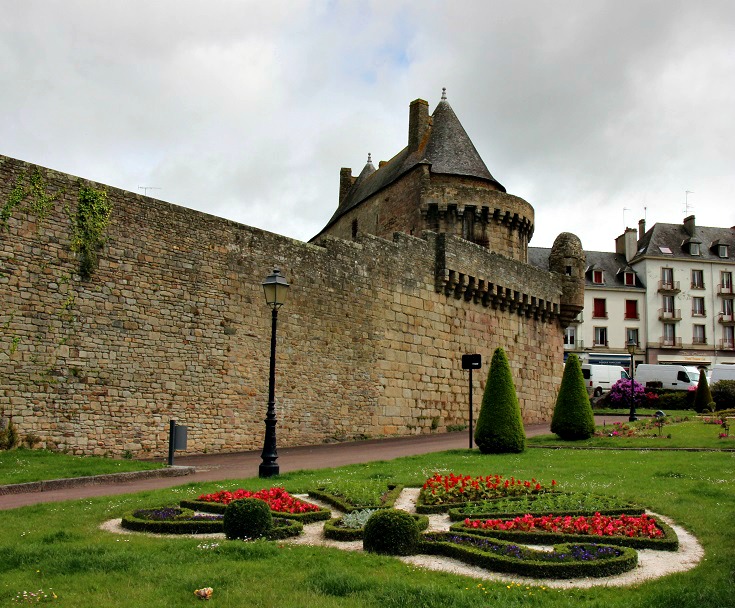 The fortified wall in Hennebont is accessible to the public and the short walk along its length offers a bird’s-eye view of the town.

If you are keen to dip a toe in the Atlantic Ocean, you’ll need to continue along to Lorient. 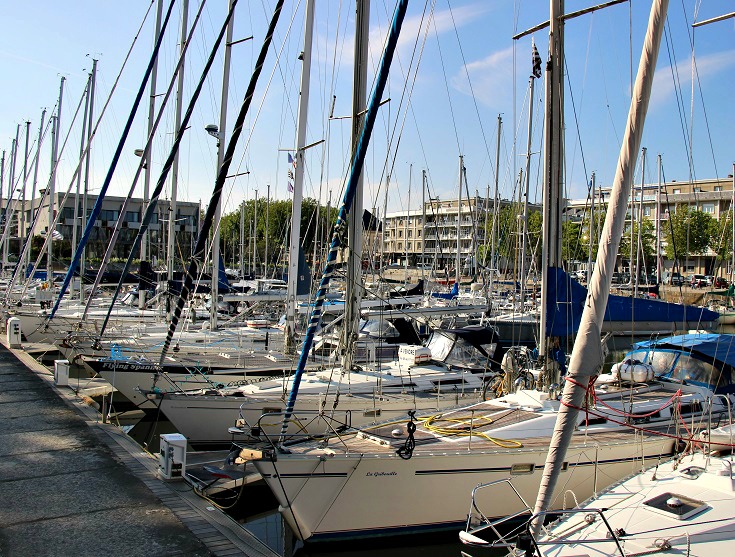 Lorient has long been a busy and strategic port for France, so much so that during WWII it was occupied by the Germans and used as a submarine base. An unfortunate consequence of this, was that it was bombed and completely destroyed by the Allies. Almost everything you’ll see today dates from the 1950s or later, quite a contrast to some of the ancient chapels you’ll have walked by over the last 200 kilometres.

Where to next along the canals of Brittany?

For something equally flat and easy to walk…

You might also enjoy the Burgundy Canal or the Midi Canal