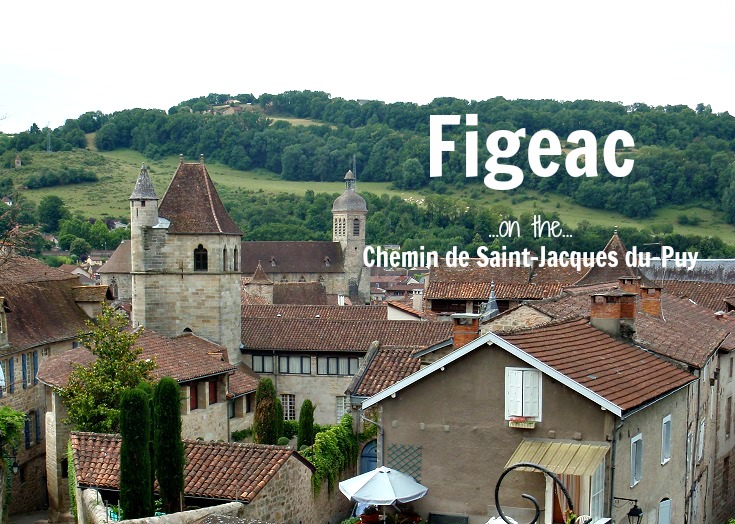 Classified as a ville d’art et d’histoire, and home to a magnificent replica of the Rosetta Stone, Figeac is the perfect place to break for a day or two from walking along the Chemin de Saint-Jacques.

There is much to do here in town and within an hour or two’s drive. Before you scroll to the bottom for practical tips on where to stay and where to eat, these are a few of my favourite ways to spend a day, or two, in Figeac. 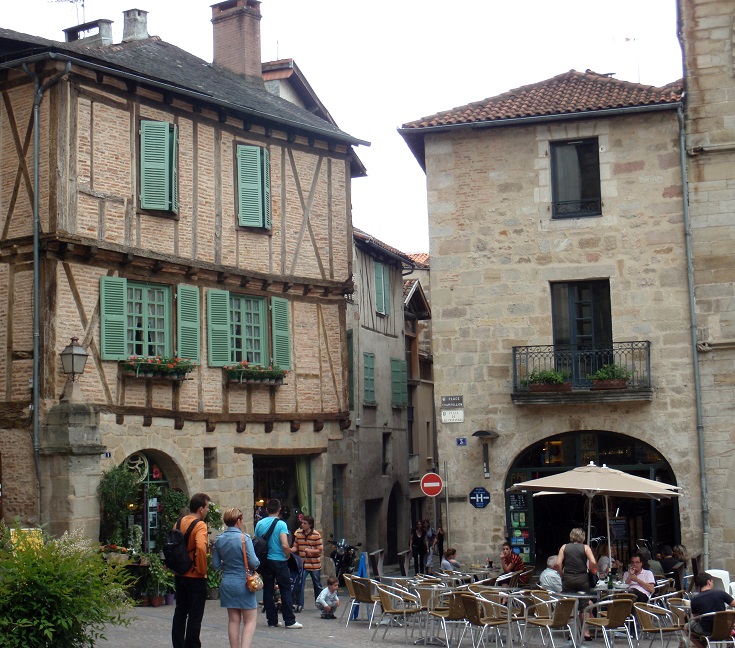 Call in to the Tourist Office which is located on Place Vival in la Maison de la Monnaie. This medieval building is considered to be one of the best examples of a merchant house in France. On the ground floor, the shop opened onto the street while living quarters for the merchant and his family were located on the upper floors.

At the Tourist Office, ask for a copy of Les clefs de…Figeac—a map of the town which guides the visitor on a two-hour walk past thirty points of interest, including museums, churches and noble houses. Each site is marked with a small plaque displaying a numbered key and the history of each building is described more fully on the map. 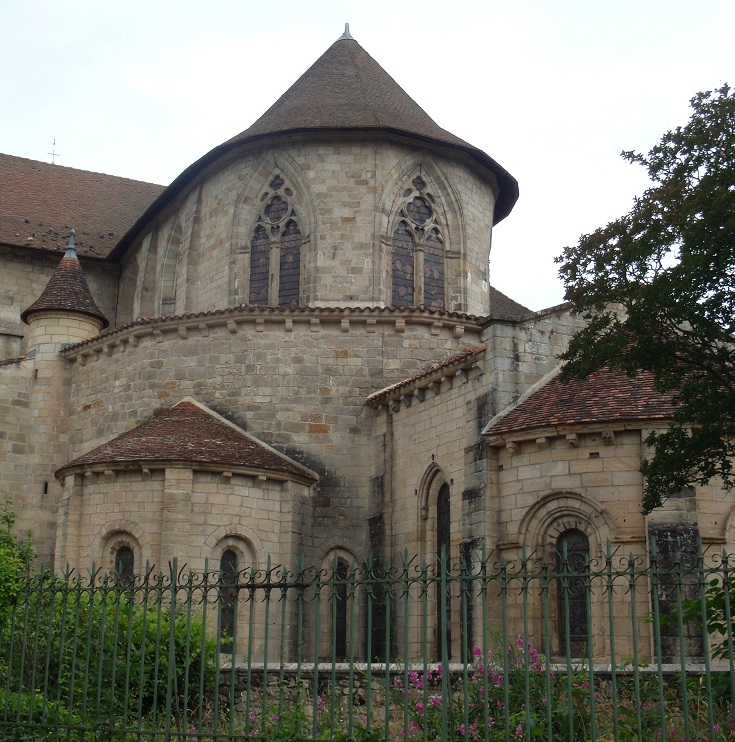 The abbey church of Saint-Sauveur

Dominating the square near the river is the larger of the two medieval churches in Figeac. Dedicated to Saint-Sauveur, the church is the last remaining building of the Benedictine Abbey around which the town grew in the Middle Ages. Although it suffered damage during the Wars of Religion, it was partially constructed in the seventeenth century and the interior is richly decorated with wood carvings.

There are many beautifully preserved half-timbered houses and stone buildings dating from the fourteenth, fifteenth and sixteenth centuries but keep an eye out for Maison du Griffon in Place Champollion, the oldest house in Figeac built in the twelfth century.

In summer, guided tours which focus on a particular theme, such as architecture or the city walls and gates, leave from the Tourist Office, providing a more in-depth exploration of the town.

And if you’ve done enough walking over the last few days and weeks, a tourist train makes a 45-minute journey around town every hour on the hour (except for lunch), every day (except for Saturday) in July and August.

Figeac was the birthplace of Jean-François Champollion, whose success in deciphering the hieroglyphics of the Rosetta Stone gave the world a greater understanding of life in ancient Egypt. His home is now a museum—Musée Champollion—dedicated to the history of writing throughout the world. 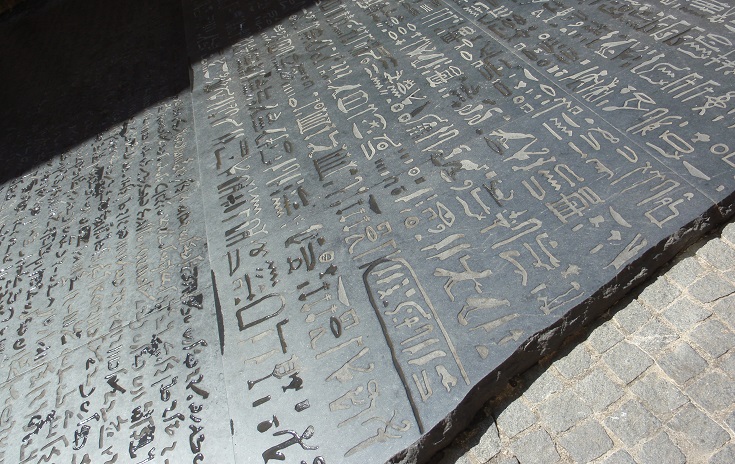 Next to the museum, in Place des Ecritures, is a replica of the Rosetta Stone by American artist Joseph Kosuth.

The museum is open from 10h30 until 18h30 every day in July and August, with slightly reduced opening hours at other times of the year. An audioguide is available in French, English, Spanish and German. 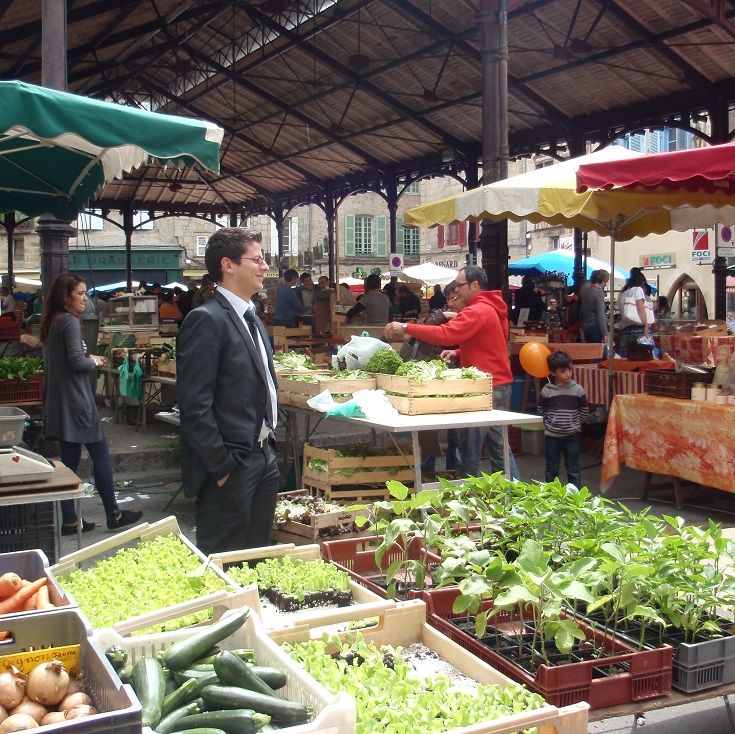 Fresh food markets in France are always a treat and Saturday morning in Figeac is no exception.

This is the perfect opportunity to stock up on trail mix—fresh figs, olives, dried fruits, prunes, nuts and a wide variety of locally grown fruit. And, of course, there is fresh bread, locally produced cheeses and wine for a truly indulgent picnic. If you can eat it quickly or have access to a fridge, treat yourself to some locally-made yoghurt which tastes unlike anything ever sold in a supermarket.

Although the Tourist Office website doesn’t mention it, the markets were also going strong on Sunday morning while I was there in summer, but confirm this with the locals before you plan your day around it. 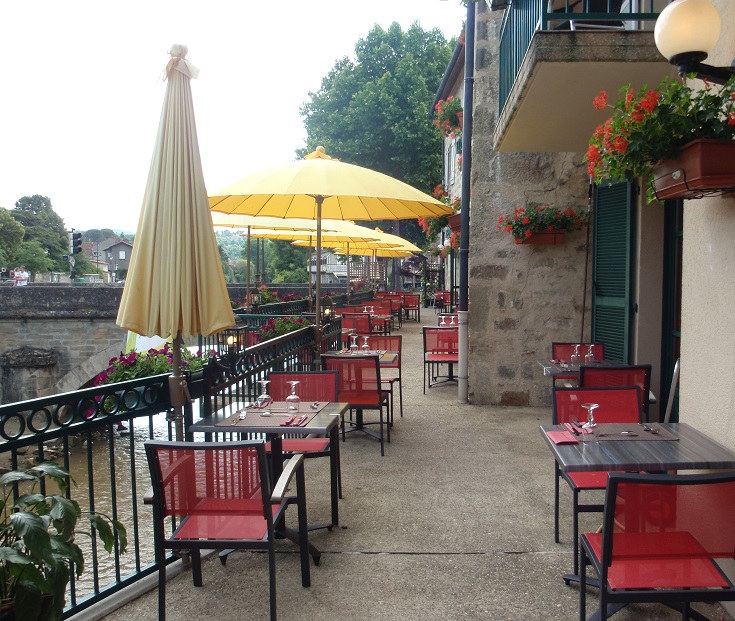 If your visit to Figeac is part of a long-distance walk along the Chemin de Saint-Jacques, chances are you passed through the most beautiful village of Conques a couple of days ago and are on your way to Saint-Cirq-Lapopie later this week.

But perhaps not? Then now is a good time to rent a car and head out into the surrounding countryside.

Fifty kilometres (31 miles) to the east of Figeac is Conques which has been an important stop on the pilgrims’ trail since the ninth century when an abbey was built here in the valley to house the relics of Sainte-Foy, a thirteen year old girl, martyred in 303 AD in nearby Agen for her refusal to renounce her Christian faith. After the initial decree that she be burned alive on a metal grill resulted in a public outcry, Foy was thrown into prison with other Christian supporters. Still, she refused to deny her faith and was later beheaded, alongside her fellow prisoners.

In 866 AD, the relics of Sainte-Foy were ‘borrowed’ from the abbey in Agen and brought to Conques where a new church was built in her honour. The relics bestowed much prestige on the village and it has been an important stop on the pilgrimage to Santiago de Compostela ever since.

Fifty-four kilometres (34 miles) to the west of Figeac is the most beautiful village of Saint-Cirq-Lapopie, the painted caves of Pech Merle and the ruins of the abbey at Marcilhac-sur-Célé. Saint-Cirq-Lapopie and Marcilhac-sur-Célé can be explored at your leisure but entry to Pech Merle is limited to 700 visitors per day. It is strongly recommended that you reserve your tickets on-line, in advance, particularly during July and August. The caves include some of the most beautifully preserved pre-historic rock paintings and natural rock formations in France.

Forty-five kilometres (28 miles) north-east of Figeac is Rocamadour, the second most important religious site in France (after Mont-Saint-Michel). Legend has it that Zaccheus, also known as Armadour and a servant of Mary, mother of Jesus, came here to live in the caves as a hermit. His perfectly preserved body was discovered in 1166 and was buried beneath the steps of the chapel. Pilgrims have been flocking here ever since, often climbing the 216 steps to the church on their knees.

Not far from Rocamadour, is the Gouffre de Padirac, a series of underground lakes and caves 103 metres below the surface. From Easter until October, you can join a guided tour that takes you by boat along an underground river before you disembark and continue on foot past majestic stalagmites and stalactites. (Rocamadour, Gouffre de Padirac and six of France’s most beautiful villages can be visited on a long-distance walk from Martel to Rocamadour.)

Where is Figeac, France?   Find it on Google maps

Figeac is located 251.5 kilometres (157.2 miles) along the Chemin de Saint-Jacques – a fourteen day walk from the starting point of Le Puy-en-Velay.

Daily train services connect Figeac to Aurillac, Toulouse, Brive-la-Gaillarde and Rodez from where you can go almost anywhere in France.

Bus services run to Rocamadour and also between Figeac and Cahors, stopping at Faycelles and Cajarc and several villages located along the Célé variante of the Chemin de Saint-Jacques including Saint-Cirq-Lapopie, Bouziès and Vers.

Download a map of the town here, the tourist map Les clefs de…Figeac here and a full list of guided visits here.

You’ll find a good range of accommodation in Figeac, with something for every taste and budget.

Where to eat in Figeac

There is a wide variety of cafés and restaurants in Figeac and you’ll find you’re never too far from a good meal. You can download a brochure with a comprehensive list of restaurants here.

There are also several patisseries and a very good chocolate shop!