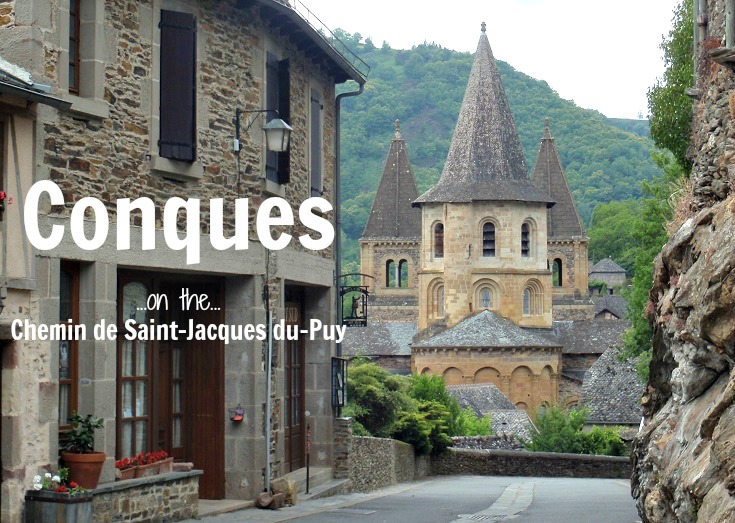 Most villages in France lure you in with enticing glimpses of a church steeple, visible from afar across green rolling hills. Not Conques! It is only as you descend into the village that the towers of the magnificent Abbaye de Sainte-Foy rise up to greet you.

Conques is the third of the eleven ‘most beautiful villages’ in France you’ll visit walking along the Chemin de Saint-Jacques.

I’ve enjoyed many unforgettable moments here. Before you scroll to the bottom for practical tips on where to stay and where to eat, these are a few of my favourites! 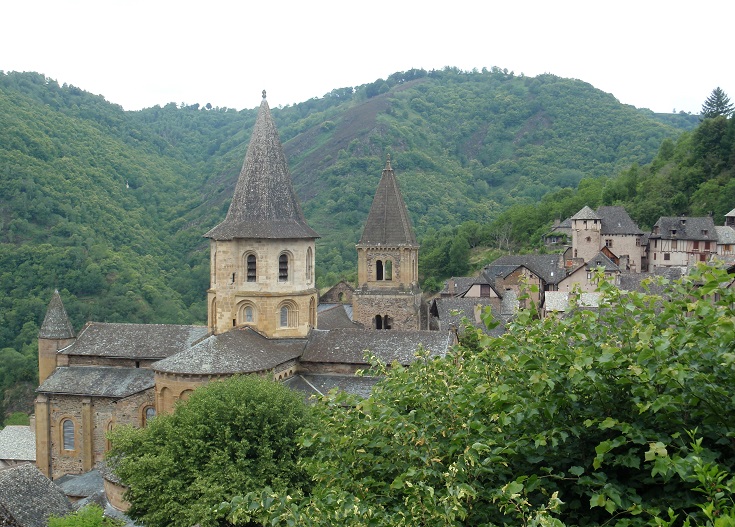 As you arrive in Conques (on foot—either along the Chemin de Saint-Jacques or from the eastern carpark), continue down the hill a little further and take some time to visit inside the abbey. This is the resting place of the relics of Sainte-Foy, a thirteen year-old girl who was martyred in 303 AD in nearby Agen for her refusal to denounce her Christian faith.

After the initial decree that she be burned alive on a metal grill resulted in a public outcry, Foy (pronounced Fwah) was thrown into prison with other Christian supporters. Still, she refused to deny her faith and was beheaded, alongside her fellow prisoners.

In 866 AD, the relics of Sainte-Foy were ‘borrowed’ from the abbey in Agen and brought here to Conques, where a new church was built in her honour. The relics bestowed much prestige on the village, which has been an important stop on the pilgrimage to Santiago de Compostela ever since. 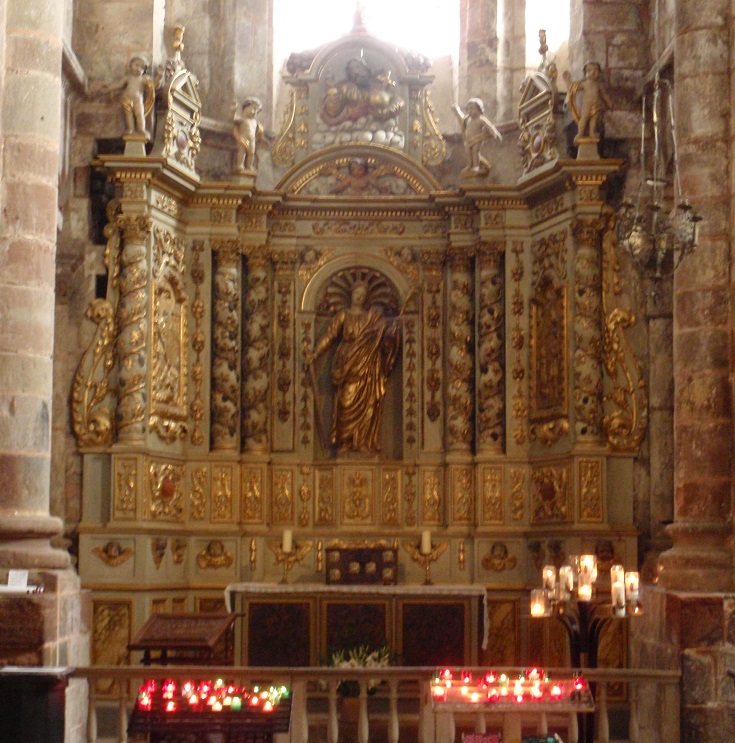 Ornate carvings decorate the inside of Abbaye de Sainte-Foy

A more detailed account of Foy’s life is provided in a small booklet Saint Faith by Frère Jean-Régis Hamel, which is available from the gift store next to the abbey. The book highlights sculptures and other symbolic references to the martyr that are located inside the church and is a handy guide to have with you when you visit the abbey.

Double arches around the cloister

A guided visit of the village

It would be a shame to rush through Conques without exploring all the delightful nooks, crannies and back streets which wind their way around the abbey. 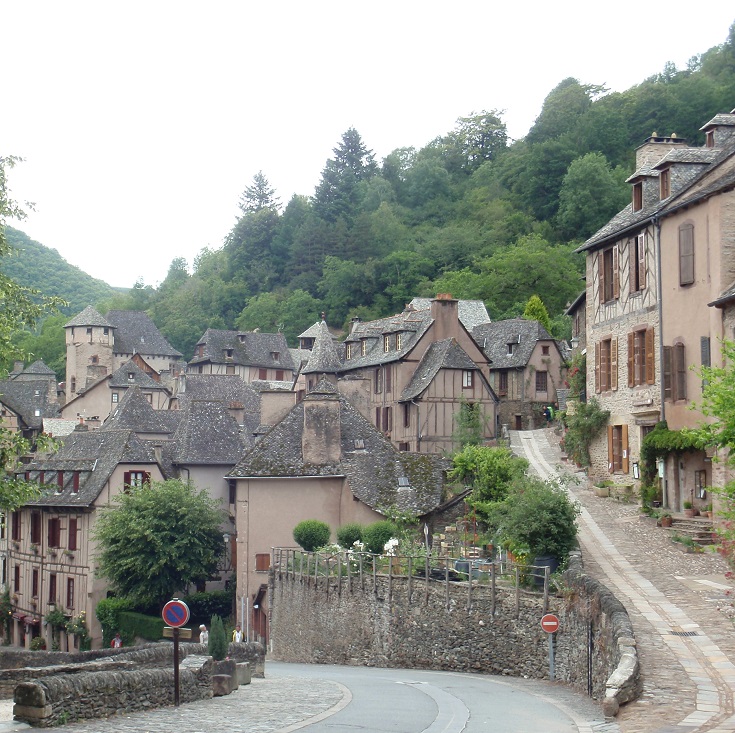 Stone and timbered houses line the streets of Conques

Call in to the Tourist Office and pick up a copy of the marked map of the village—Step by Step Through the History of Conques—to guide you around. Be sure not to miss the cloister and Treasury, which is filled with precious relics from the Middle Ages.

Guided visits are also available in English from the Tourist Office, as are night tours of the Tribunes in the abbey. 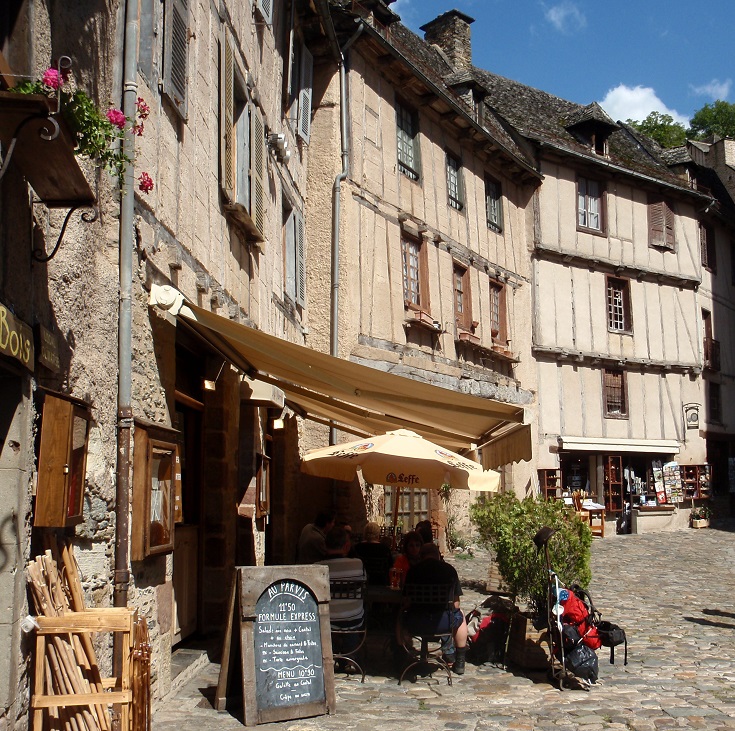 There are several cafés and restaurants in Conques and deciding where to eat is a difficult task. For stunning views of the abbey, it’s hard to go past the cafés in Place de l’Eglise. Relax over a leisurely lunch and admire the contemporary stained-glass windows by local artist Pierre Soulages. 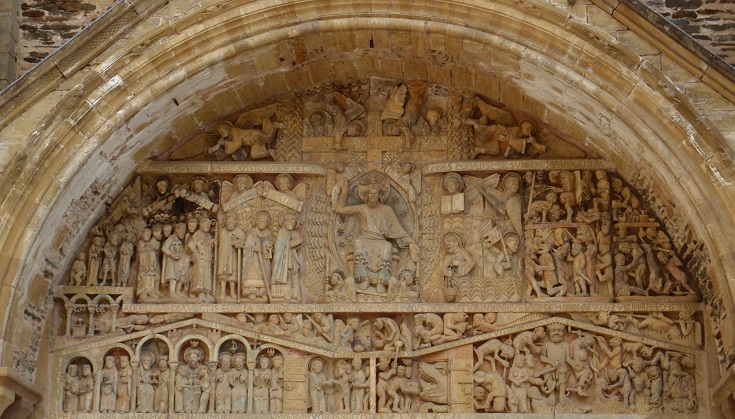 Twelfth-century tympanum above the entrance to Abbaye de Sainte-Foy

Vespers in the abbey

Vespers are held in the abbey to welcome pilgrims every night at 6.30 pm. After the service, everyone gathers outside where a priest tells the story of Sainte-Foy and Saint-Matthew, depicted in the twelfth-century tympanum above the entrance. Despite understanding almost nothing of what was said (it was en français), I found this a captivating experience (and now that you know a little of Sainte-Foy’s poignant story, you’ll be well able to follow along!).

In summer, the tympanum is brightly lit each night, showing the stone carving in glorious colour—a truly magical sight! 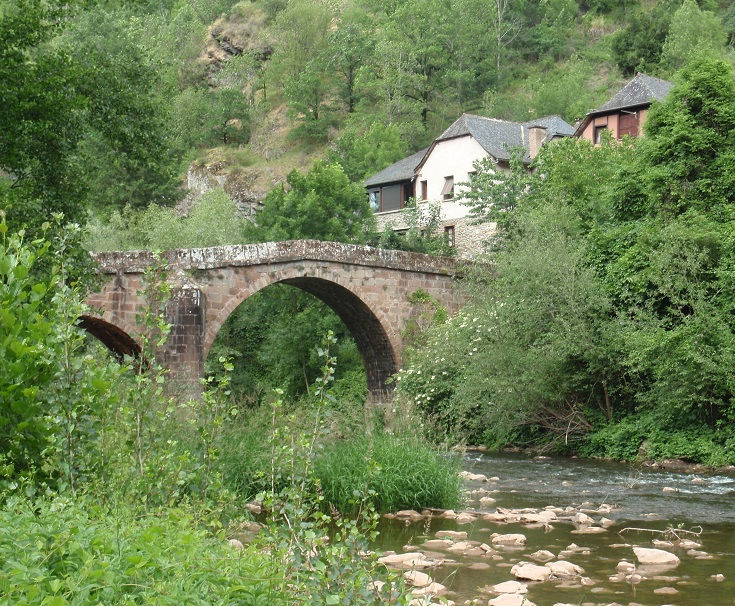 Many walkers who have started out from Le Puy-en-Velay and plan to complete their journey along the Chemin de Saint-Jacques in stages, take advantage of the transport links in Conques and finish their walk here.

If you decide to do the same and not continue your walk towards Figeac, be sure to venture just a short way further along the Chemin de Saint-Jacques to the roman bridge at the edge of the village. 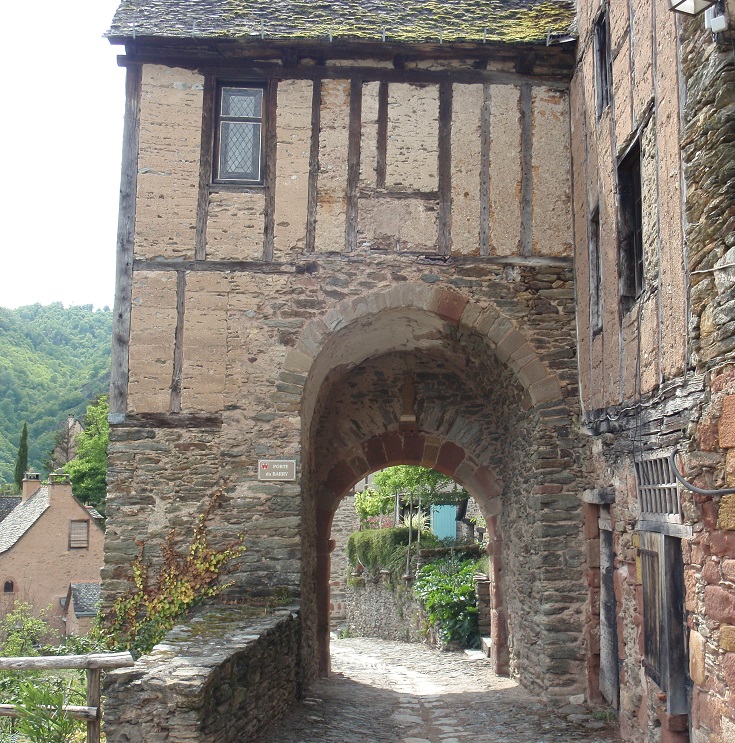 The path will take you under Porte de Barry, one of the original entrances to the village. It’s fun to imagine, hundreds of years ago, a guard keeping watch over the pilgrims and merchants coming and going.

Today, perhaps, it’s someone’s bedroom or sitting room, a place to curl up with a good book… 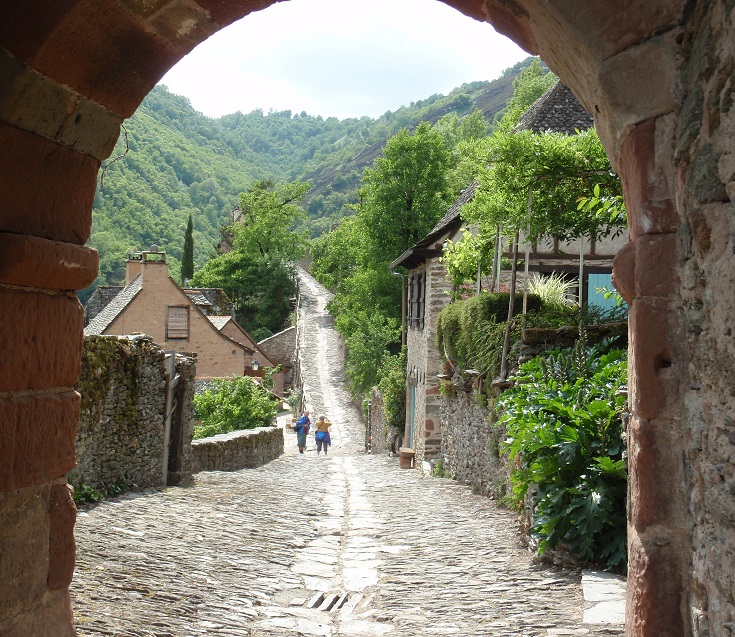 Before leaving, let’s take one last look around the village…

Stone turrets of Abbaye Sainte Foy rise above the trees 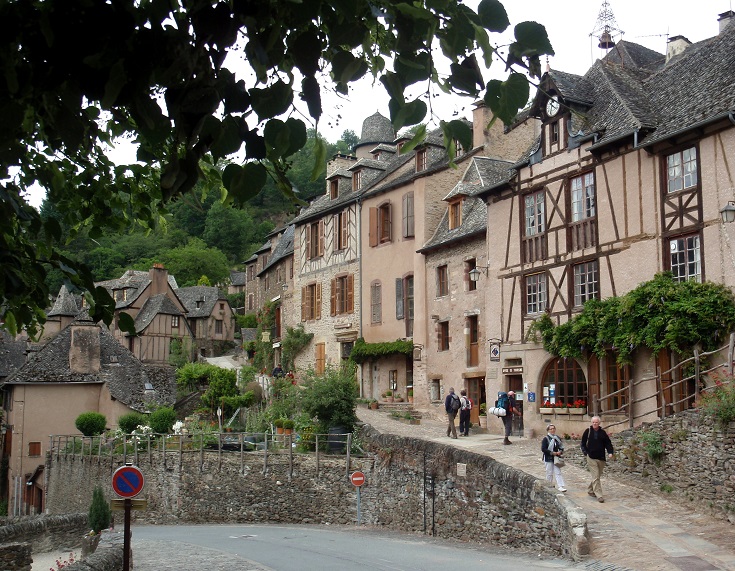 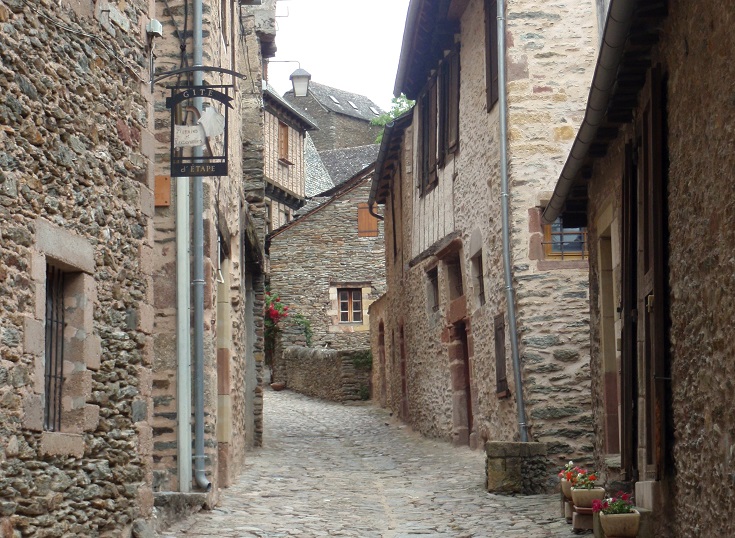 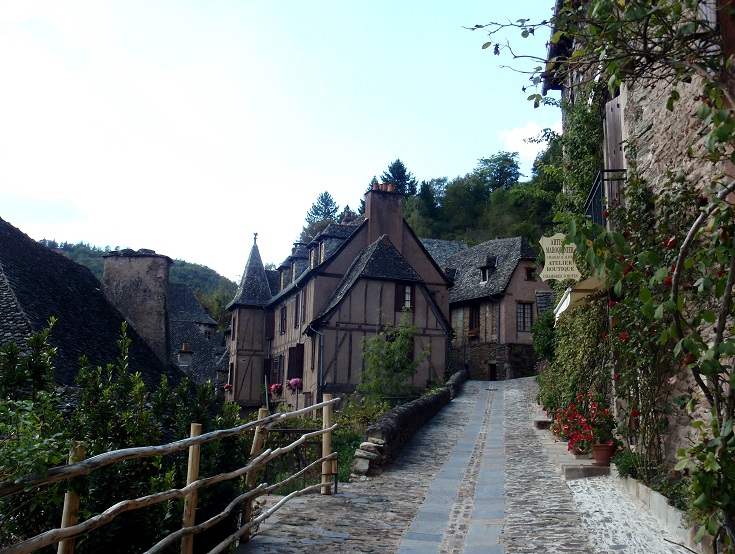 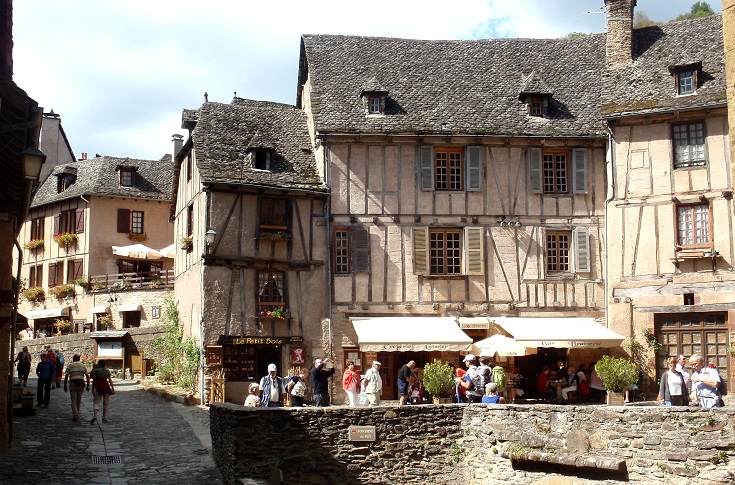 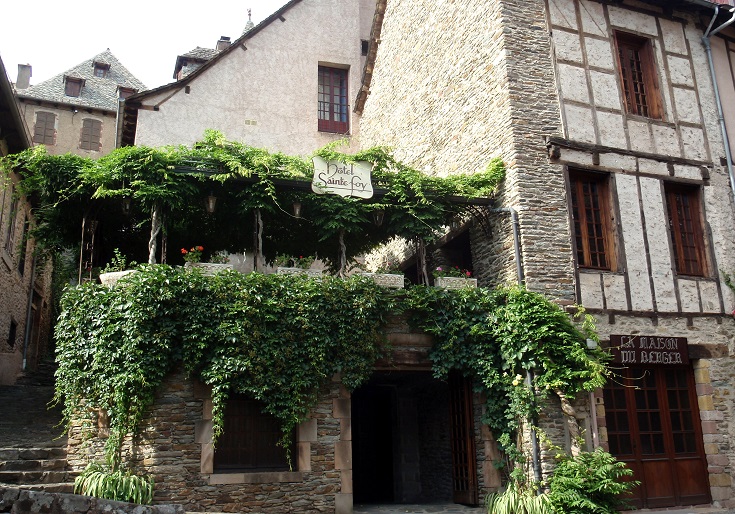 Where is Conques, France?   Find it on Google maps

Conques is located 203.5 kilometres (127.2 miles) along the Chemin de Saint-Jacques – an eleven day walk from the starting point of Le Puy-en-Velay.

Conques is one of eleven ‘most beautiful villages’ found along the Chemin de Saint-Jacques du-Puy. Find them all here.

Buses also run to the train station in Rodez from where you can go practically anywhere in France.

You’ll find the Tourist Office in the middle of the village just above the abbey. Opening hours are listed here.

During the summer months, Conques is a busy tourist destination, attracting both walkers and day-trippers. Despite what appears to be an abundance of rooms listed below, I have spent both my stays at Hôtel le Sainte Foy, simply because all the cheaper beds were taken. And although it was pricier than I would normally spend on a walking holiday, it was beautiful and luxurious and worth every penny!

Where to eat in Conques

There are cafés aplenty in Conques—choose one with a view, one with a wisteria covered terrace. If you are following my suggested itinerary, you’ll arrive in Conques around lunchtime after a short walk from Espeyrac. This should give you enough time to sample a few—for coffee, for lunch, for an afternoon snack…

Reward yourself tonight with a Michelin-starred meal at le Moulin de Conques on the far edge of the village where Hervé Busset serves dinner every night except Monday.