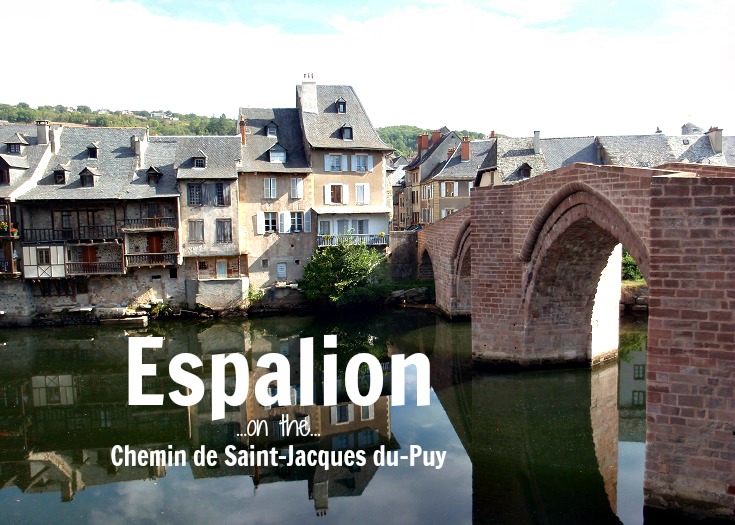 So far the walk along the Chemin de Saint-Jacques du-Puy has passed through many delightful villages. Most have been quite small and wandering around without getting lost has not been a problem.

By comparison, Espalion is a large, busy town – with several grocery stores, pharmacies, banks and restaurants to choose from – oozing with medieval charm. 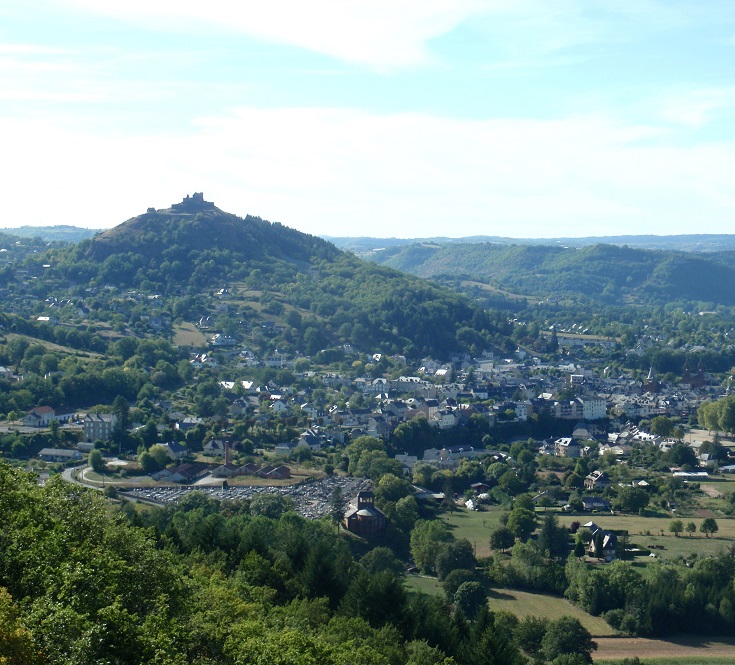 View of Espalion from La Vierge on the GR 65

The approach towards Espalion from Saint-Côme-d’Olt climbs a couple of challenging hills although, if you have a TopoGuide or other good map, you can take a much easier route following the road along the river. You will however, miss this glorious view of the town, nestled into the valley alongside the river and watched over by the ruins of the fortified château Calmont d’Olt.

The GR 65 path and the variante non balisée from Saint-Côme-d’Olt meet on the edge of town at l’église de Perse. Twelfth-century Église de Perse at the entrance to Espalion

This beautiful church was built during the eleventh and twelfth centuries and has been an important stop along the Chemin de Saint-Jacques since that time. It was the parish church for 400 years until the construction of the much grander church of Saint-Jean-Baptiste in the sixteenth century. Medieval turrets and Pont Vieux across the River Lot

As you reach town, a glance along the river will provide you first views of the old bridge – le Pont Vieux.

(I was reminded as I arrived in Espalion in the late afternoon, that a walker’s schedule often has you reaching town when the sun is low and the prettiest buildings are in deep shadow—nothing to do but come back another day, perhaps!)

Records show that the bridge existed in 1060 and for many years boasted three towers and a drawbridge. At one time it housed around twenty shops and was a busy marketplace. It is now closed to traffic but in May, it still carries herds of cattle to summer pastures during Transhumance. 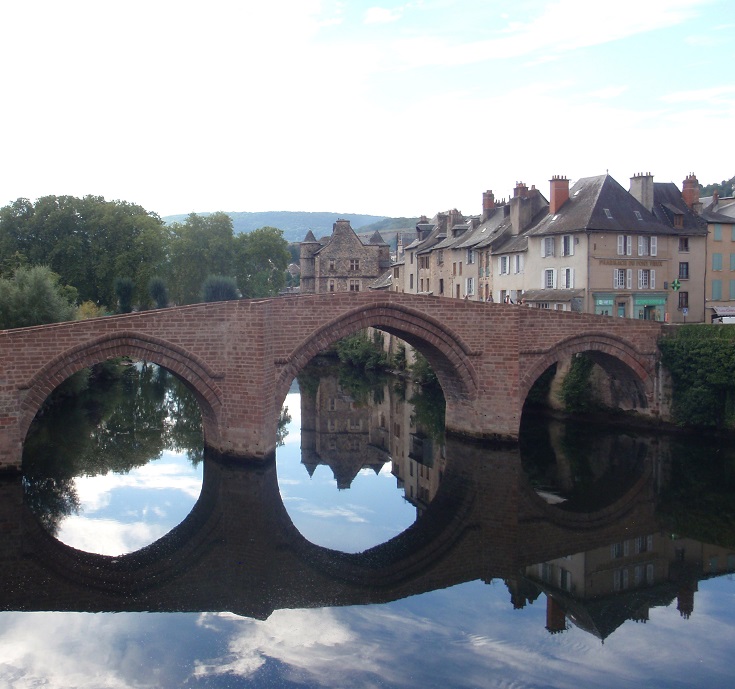 On the far bank, between the two bridges, you’ll see the old tanneries where hides were washed in the river. 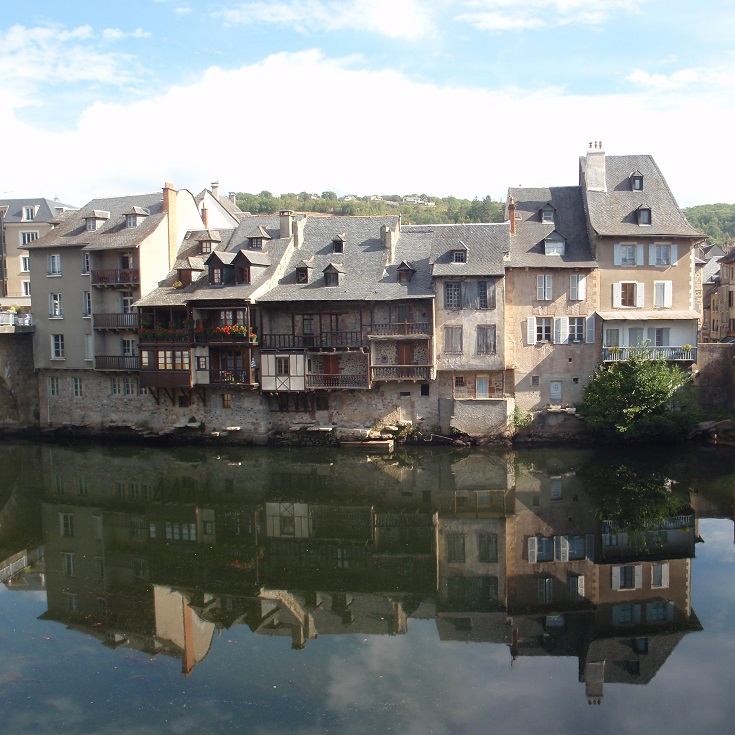 On the main street you’ll pass the relatively modern parish church, built in the nineteenth century and featuring two, forty-five metre towers crowned with statues of Mary and Joseph.

In 1978, the older church, dedicated to Saint-Jean-Baptiste, became home to le Musée des Arts et Traditions Populaires and now displays artefacts from nineteenth-century daily life. The church also houses le Musée du Scaphandre (Diving Museum) in honour of Auguste Denayrouze and Benoît Rouquayrol – inventors of the first modern diving equipment – who were born near here and carried out their first experiments in the River Lot. 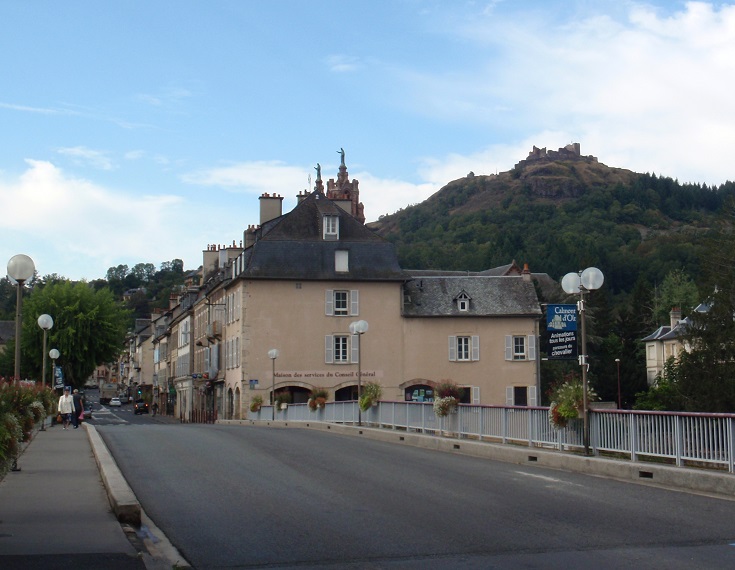 I’ll admit that as I walked along the Chemin de Saint-Jacques, a visit to the fortified château Calmont d’Olt required a climb of one hill too many but I had called in on a previous visit.

The château offers an interesting insight into siege warfare during the Middle Ages. Guided tours and demonstrations show how soldiers attacked oncoming armies by catapulting boulders down the hill and tell the gruesome story of soldiers hurling decaying animal carcasses into enemy camps to inflict injuries and spread disease.

If you’d like to see it, take a taxi up the hill and perhaps on to Bessuéjouls to continue your walk afterwards. 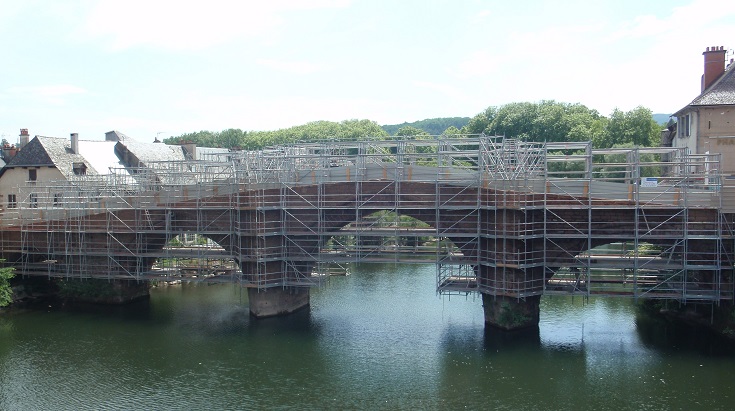 And a reminder that somewhere on your holiday, the sight you’ve been longing to see will be undergoing renovation and covered in scaffolding!

Where is Espalion, France?   Find it on Google maps

Espalion is located 156 kilometres (97.5 miles) along the Chemin de Saint-Jacques – an eight day walk from the starting point of Le Puy-en-Velay.

If you prefer to set your own agenda, I share the steps I take take to plan my itinerary on any long-distance walk (using the Chemin de Stevenson as a case study)

You’ll find the Tourist Office at Place du Plô, on your right soon after reaching the town. Opening hours are listed here.

If you didn’t collect a map of Espalion from the mairie in Saint-Côme-d’Olt, download one here (Recto 2). The map highlights fifteen historical monuments or sights to discover as you walk around town. Details of each site are detailed (in French and English) in this accompanying brochure.

Château Fort de Calmont d’Olt is open from 10h30 until 19h30 during July and August but hours are reduced at other times of the year. Check the website for opening hours and demonstration times.

You’ll find a range of options for lodging in Espalion, including –

Where to eat in Espalion

There are many cafés and restaurants, as you’d expect in a town the size of Espalion. On most nights, you’ll have no trouble finding a good dinner, whether your preference is for pizza, something cheap and cheerful, or something more refined.

As luck would have it, we arrived on a Sunday – a day the French often reserve for quality time with the family. After some searching, we found the sidewalk bistrot at La Tour serving dinner and enjoyed a delicious meal.

If your stay occurs on a Thursday night, you’ll be able to stock up on fresh fruit and trail mix at the fresh food market, held every Friday morning.