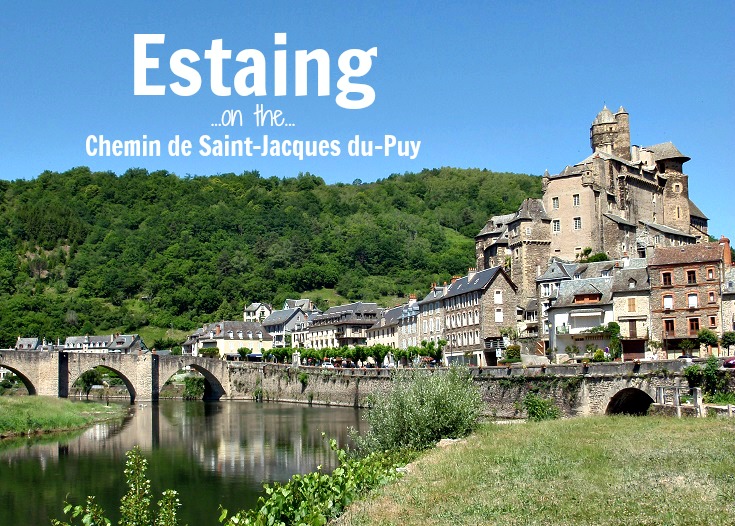 One hundred and sixty-eight kilometres (105 miles) after leaving Le Puy-en-Velay, the Chemin de Saint-Jacques reaches the ‘most beautiful village’ of Estaing. Sitting on a bend of the River Lot and dominated by an imposing eleventh-century château, the village presents a breath-taking view—almost daring you to keep walking without stopping to take a photo. 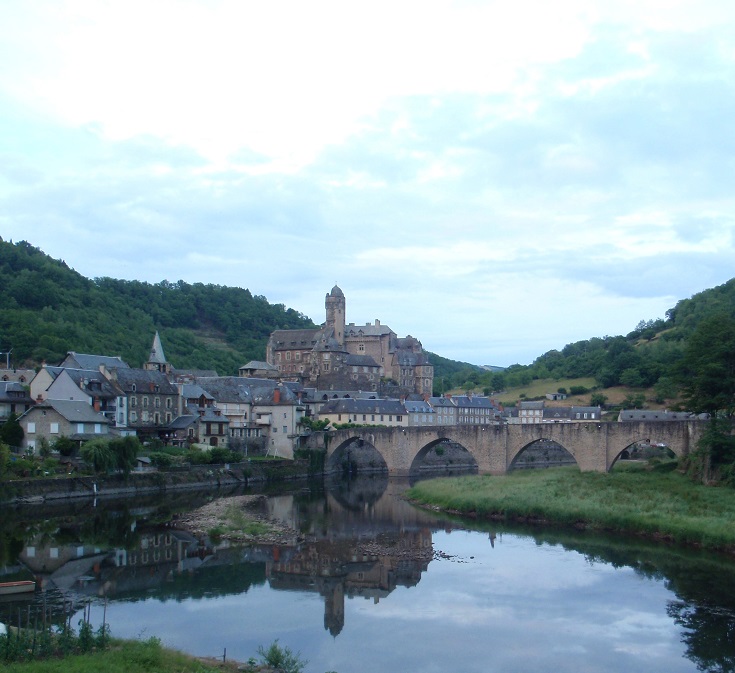 The ‘most beautiful village’ of Estaing on the River Lot

I recommend a shorter walk (12 kilometres/7.5 miles) on the ninth day of walking along the Chemin de Saint-Jacques (day 4 on the second stage), arriving in Estaing around lunchtime and leaving the afternoon free to relax. There are plenty of picturesque corners to explore or to simply sit and rest your feet.

Call into the Tourist Office in Rue François d’Estaing and ask for a map of the village which highlights eighteen marked points of interest—and start walking! 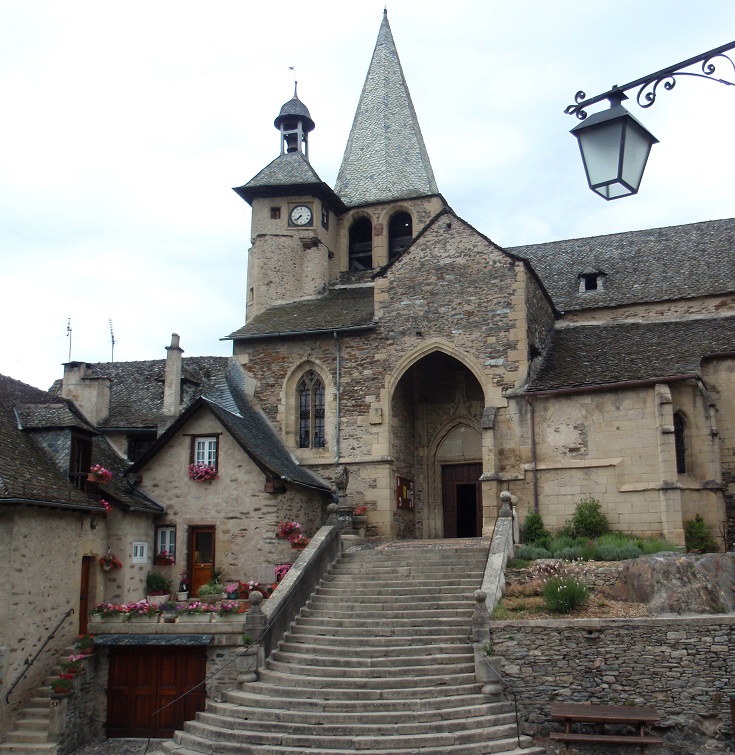 Visit the church of Saint-Fleuret

From the river, head up Rue François d’Estaing. Tucked away behind the buildings on your right is the fifteenth-century church dedicated to Saint-Fleuret, a priest who died here in 621 AD while on a pilgrimage to Rome. Like all good saints, he performed many miracles and a procession is held in his honour on the first Sunday in July. 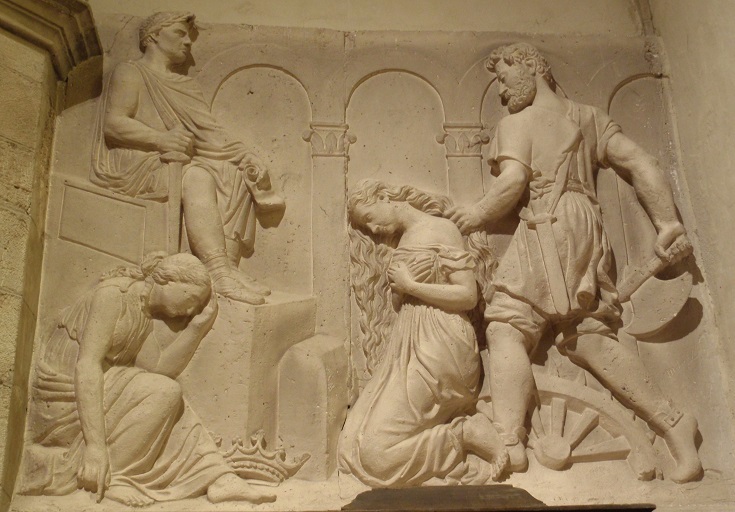 The inside of the church is beautifully decorated in shades of gold and blue and displays an interesting collection of carved panels, including a poignant image of a young girl about to lose her head. 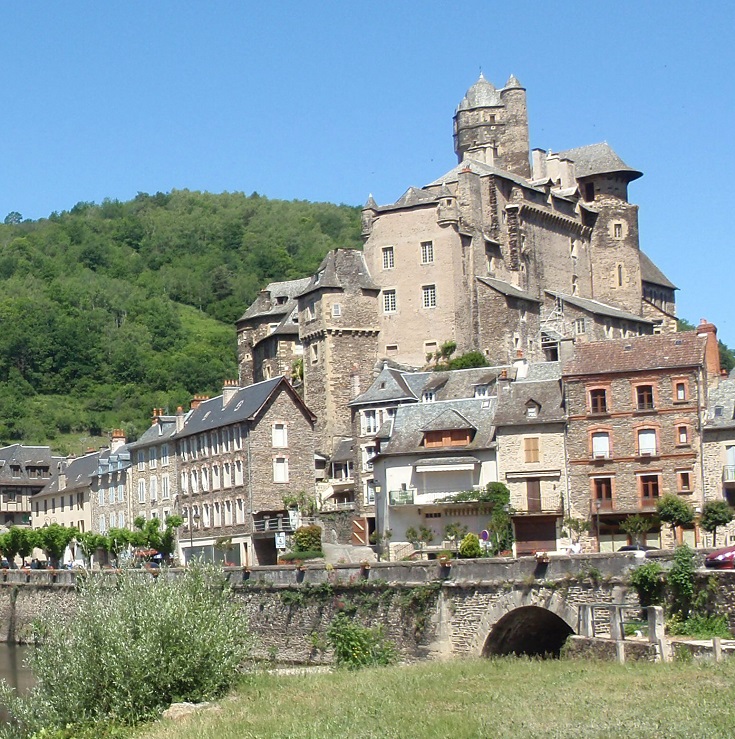 Across from the church stands Château d’Estaing—an imposing structure that dominates every view of the village. The château was built in the eleventh century but has been expanded over time, with extensive renovations being completed in recent years.

For most of the last 800 years, this grand building has been home to the ruling family of Estaing, many of whom have played important roles in the military and religious history of the region. Since 2005, it has been owned by Valéry Giscard d’Estaing—President of France from 1974 to 1981. Some of the rooms that are open to the public display an exhibition dedicated to his life and career, while others provide information about the room’s original use.

The château can be explored at your own pace or guided visits are available. 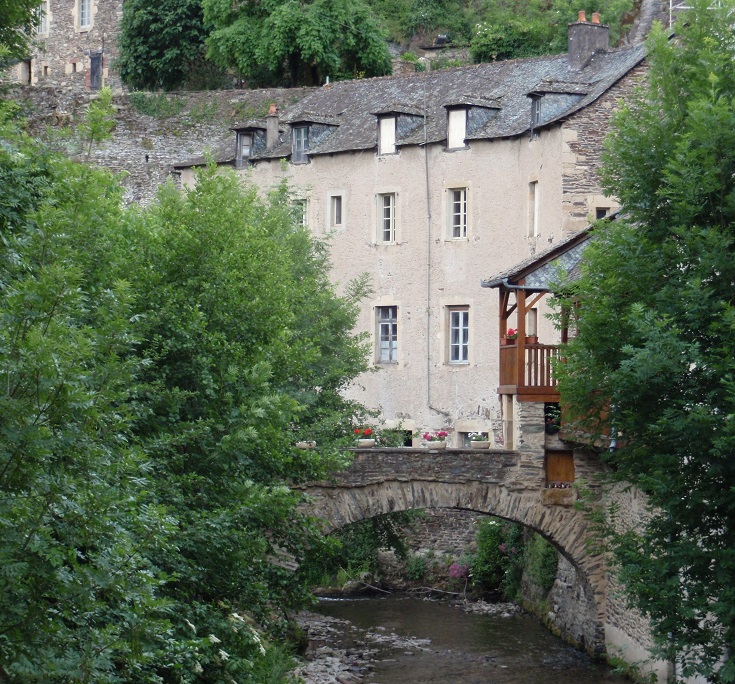 Stone houses line the stream which runs through Estaing

Wander through the back streets

Every corner in Estaing is a photo opportunity and every fork in the road is an agonising decision.  No matter which way you choose, the views will be splendid and if you wander aimlessly for half an hour or so you are bound to cover most of the village. 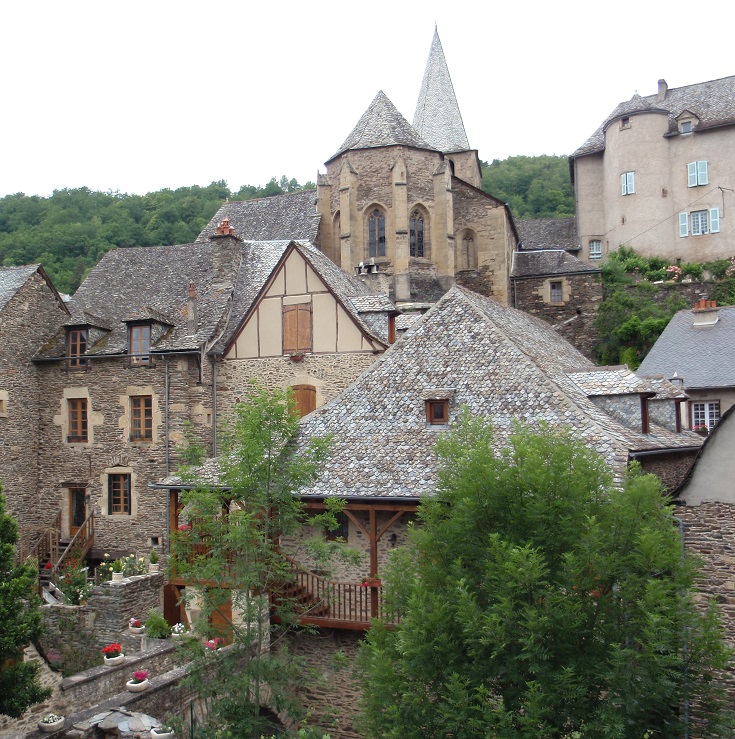 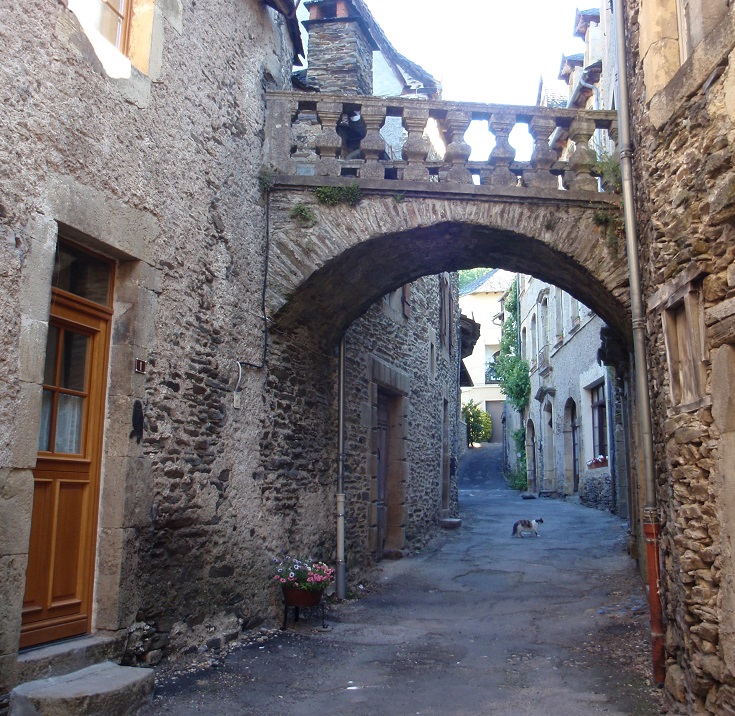 Enjoy an ice-cream at Chez Lilou

Every afternoon (except for Wednesdays), the staff at Chez Lilou set out tables and chairs along the footpath beside the river. 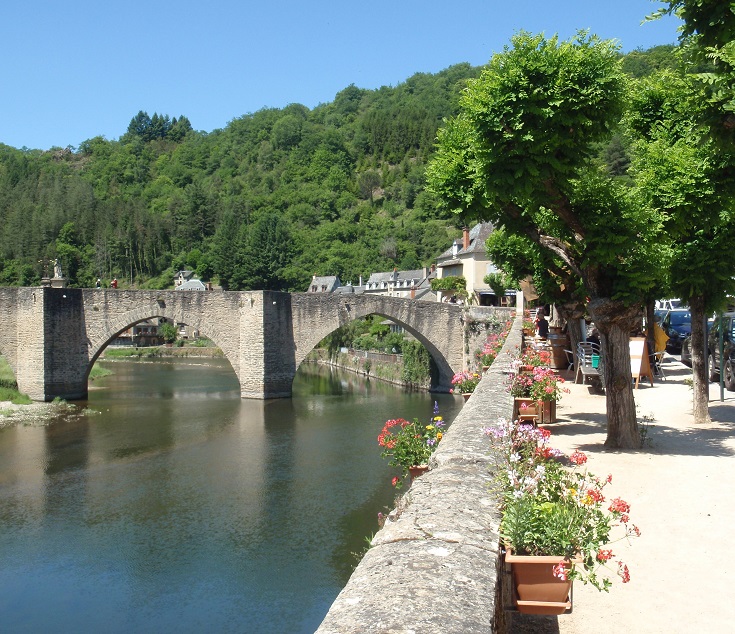 Chez Lilou sets out tables here alongside the river

You’ve earned a rest, even if you’ve only walked eleven kilometres (seven miles) from Espalion, so find a seat overlooking the river. In addition to the usual choice of cold drinks, coffee and light meals, Chez Lilou also serves an extensive range of ice-cream. 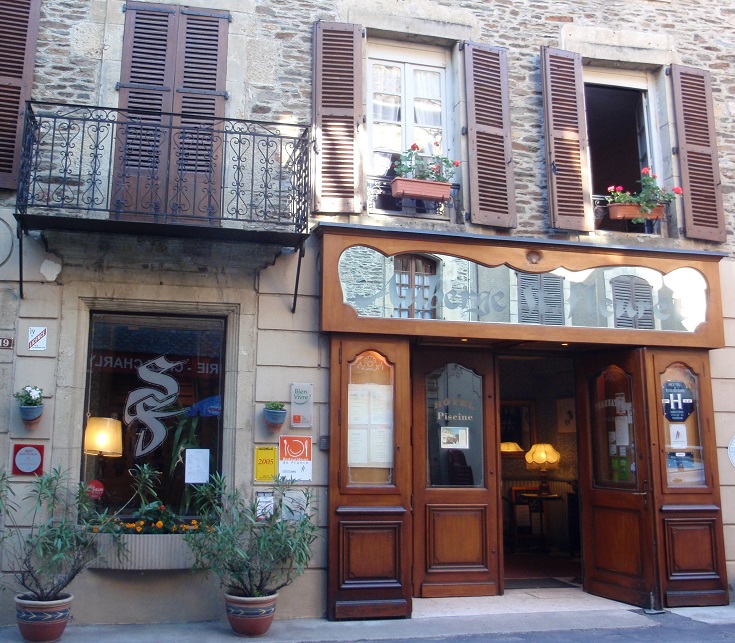 Estaing hosts several festivals throughout the year. Beds can be scarce at these times and I recommend booking well in advance.

Each Wednesday evening from mid-June until mid-September, a Son et Lumière display illuminates the château.

On most Saturday evenings in July and August, the village is lit by flaming torches as young and old parade through the streets in medieval costumes. The festivities culminate in a medieval festival which is held during the second weekend of September. 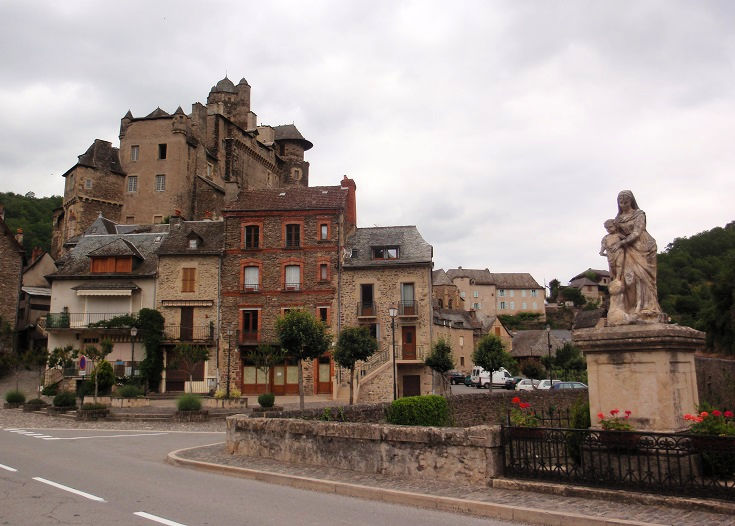 Where is Estaing, France?   Find it on Google maps

Estaing is located 168 kilometres (105 miles) along the Chemin de Saint-Jacques – a nine-day walk from the starting point of Le Puy-en-Velay.

Estaing is one of eleven ‘most beautiful villages’ found along the Chemin de Saint-Jacques du-Puy. Find them all here.

A tourist map, which includes a description (en français) of eighteen marked points of interest, is available from the Tourist Office or can be downloaded at Guide de visite d’Estaing.

Check the Château d’Estaing website for opening hours throughout the year.

You’ll find a list of events and festivities occurring during your stay here (select your dates, then choisir un lieu – Estaing)

The number of beds in Estaing has risen sharply with four new gîtes and chambres d’hôtes adding to the supply. You’ll find accommodation at:

Where to eat in Estaing

After a long day walking and sight-seeing, you deserve a good dinner and l’Auberge Saint-Fleuret offers delicious regional cuisine made from local produce. If the weather is warm, tables are set out on the vine-covered back terrace but cooler nights may be spent inside around the fire. (I have stayed at l’Auberge Saint-Fleuret on two visits to Estaing and can thoroughly recommend both the rooms and the dinner.)

Dinner is also served at Aux Armes d’Estaing and although I have not eaten there, the photos on the website look very tempting.

There are several other cafés located in the village serving local specialities or if you prefer, pizza or crêpes – and, of course, ice-cream and light snacks at Chez Lilou.

Groceries and other essentials are available from the boulangerie and épicerie, both are located on Rue François d’Estaing.

Fresh food markets are held on Friday evenings in July and August.