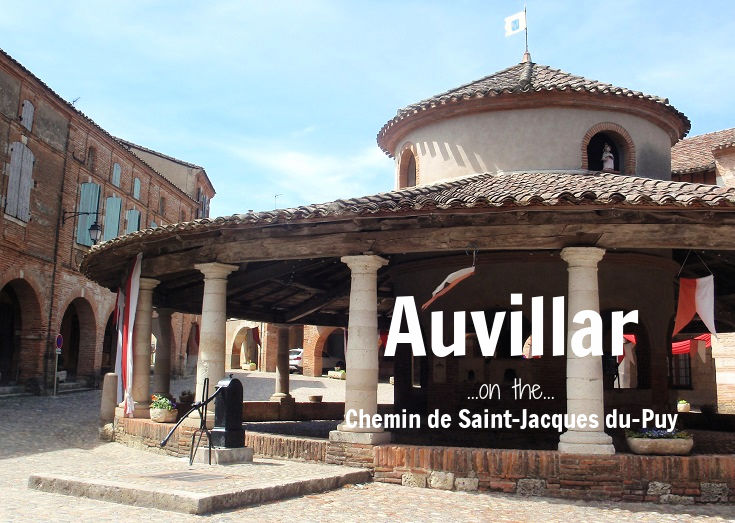 Perched high on a ridge above the northern bank of the Garonne River stands the ‘most beautiful village’ of Auvillar.

Ideally located twenty kilometres (twelve miles), or one day’s walk, past Moissac, the village is the perfect choice for an overnight stay when walking along the Chemin de Saint-Jacques du-Puy. 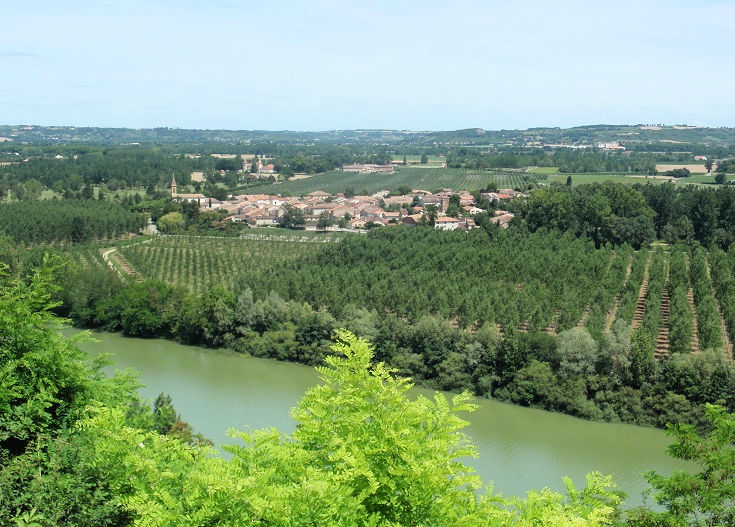 View across the river to the village of Espalais

This location, high above the surrounding countryside, provided a clear view of armies approaching over the wide plains to the north or along the river, giving the village strategic importance when it was fist settled in Gallo-Roman times (100 BC—500 AD).

Despite this, Auvillar was invaded many times over the next several hundred years and, in the tenth century, high walls were built to fortify the village and the château. In the centuries that followed, the Hundred Years War and the Wars of Religion brought many battles to the town. Numerous buildings were badly damaged and the château was destroyed. 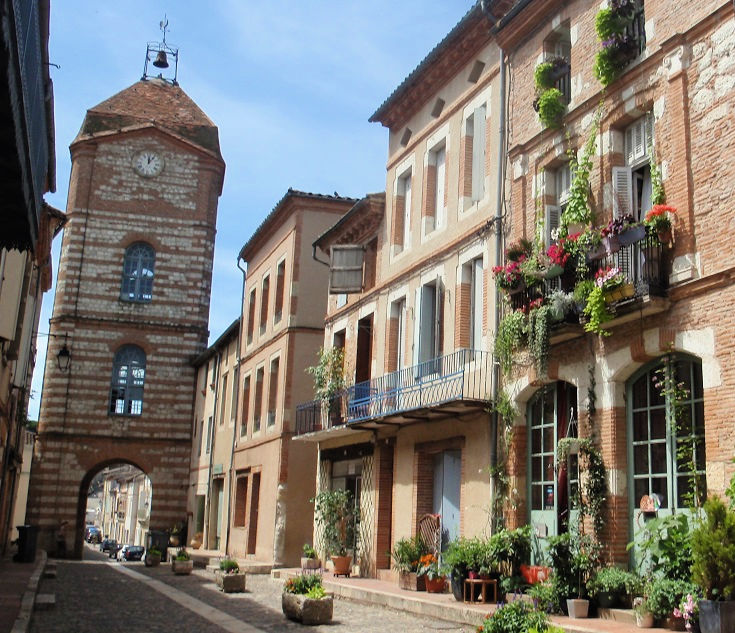 By the nineteenth century, Auvillar had developed a flourishing pottery industry and at the height of production in 1820, fifteen workshops were turning out more than a million pieces of pottery. The town’s proximity to the Garonne River enabled goods to be transported to Bordeaux and on to England (examples of the pottery, with its distinctive fluted edges and striking colours can be viewed at le Musée de la Faïence in Place du Château (open every afternoon, except Tuesday, from mid-April until mid-October).

If you are not staying the night in Auvillar, take an hour or so to explore the village. As you enter the town, and pass under the eighteenth-century clock tower, turn left instead of continuing straight ahead along the Chemin de Saint-Jacques. 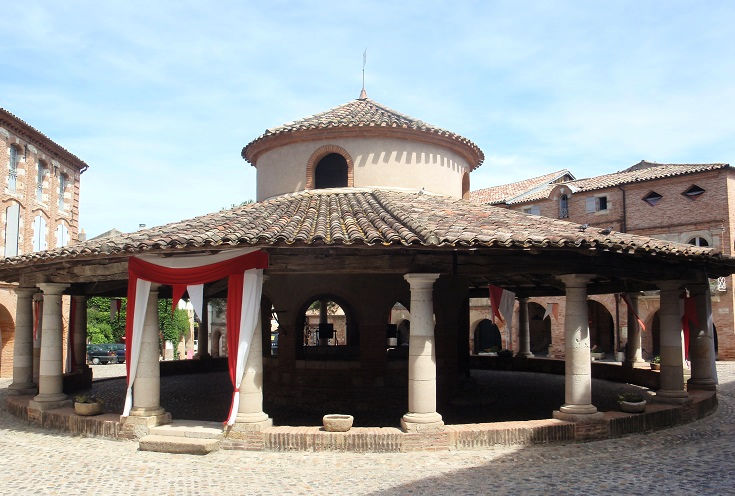 A few steps further along, in the centre of the village, you’ll find the beautiful Halle Circulaire, which offers a shady spot to relax and rest your legs. 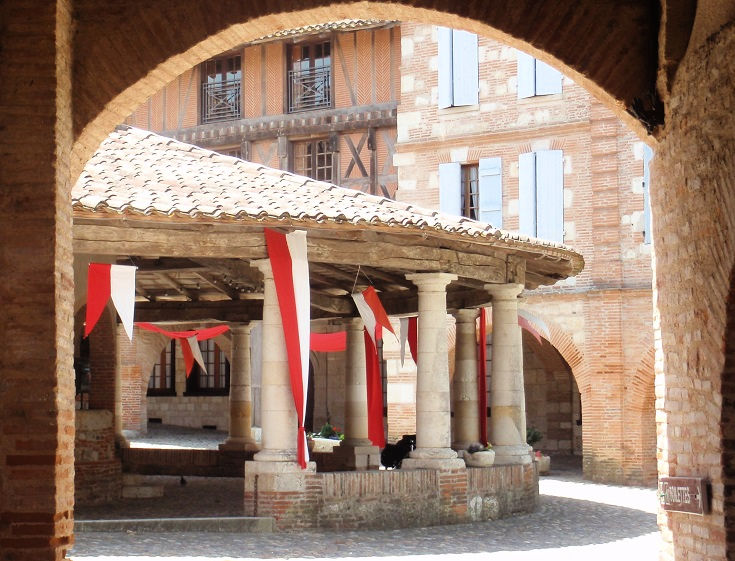 From here, it’s a short walk to Place du Château and the spectacular views back over the river towards Espalais. Spend a few moments admiring the landscape, then stroll back to the Tourist Office and turn left towards the starkly beautiful Église Saint-Pierre. 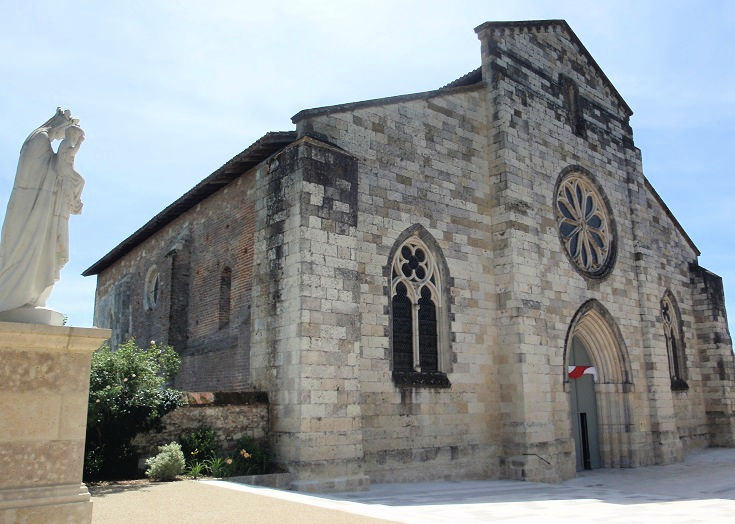 Built in the twelfth century, this structure suffered extensive damage during the wars of the Middle Ages and now, the priest’s chapel is all that remains of the original building. Several extensions and restorations have occurred since that time and a colour-coded plaque inside the church explains when each of the current walls and chapels were added. 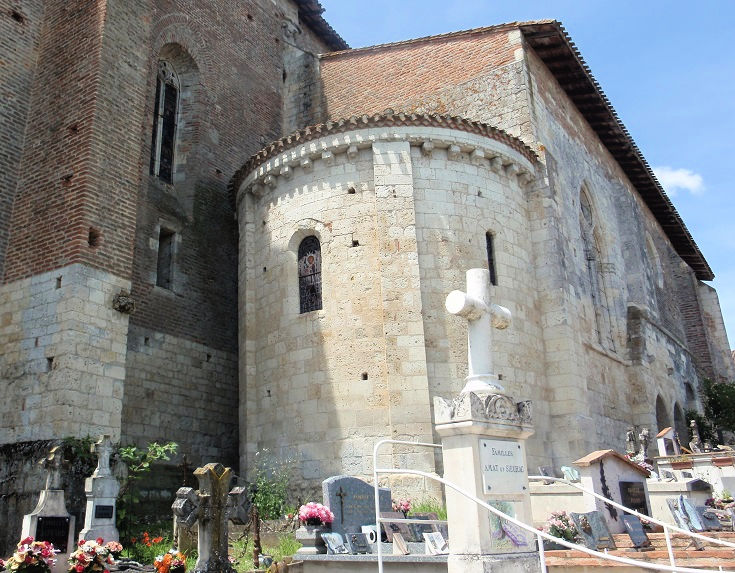 Auvillar hosts several festivals throughout the year. Competition for a bed can be fierce at these times and so it’s advisable to book ahead if you want to be sure of a room. Some notable festivities include:

Other musical events, hosted by the French-German Cultural Society, are held in August and September.

In late July, stories from the history of Auvillar are re-enacted by Théâtre en plein air, with the village serving as a giant backdrop.

Fête de la Saint-Jean, held on 22 June, celebrates the summer solstice. It begins in the afternoon with a game of pétanque, and continues into the night, with a communal dinner of paëlla and the lighting of a giant bonfire. 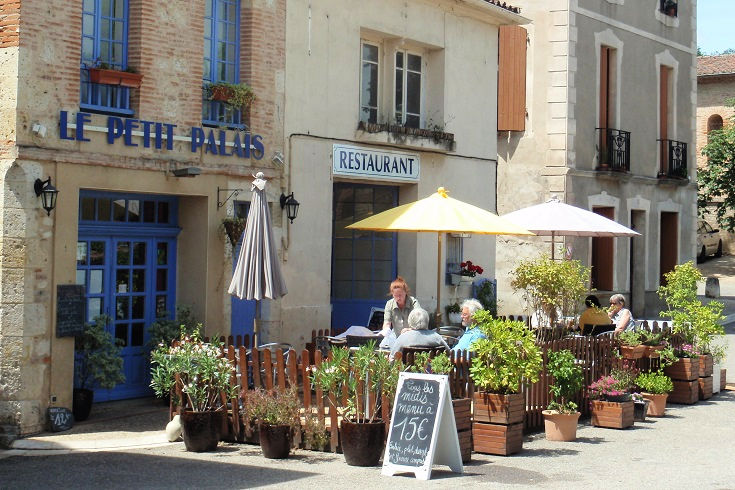 Where is Auvillar, France?   Find it on Google maps

Auvillar is located 434.8 kilometres (271.8 miles) along the traditional Chemin de Saint-Jacques path and an easy twenty-kilometre (twelve-mile), or one day’s walk, from the previous town of Moissac.

My preferred route follows the variante from Figeac through the Célé valley which increases the distance to 455.7 kilometres (284.8 miles)—a twenty-four day walk from the starting point of Le Puy-en-Velay. You’ll find all the information you need about both routes here.

Auvillar is one of eleven most beautiful villages found along the Chemin de Saint-Jacques du-Puy. Find them all here.

If you’ve grown accustomed to pitching your tent as you walk along the Chemin de Saint-Jacques, this is the night to upgrade to a cosy bed (there is no campground nearby). Options for accommodation include—

If beds in Auvillar are fully booked, you’ll find accommodation in Espalais at the foot of the ridge before crossing the river—

Where to eat in Auvillar

No matter whether you are in the mood for pizza, crêpes or something more refined, you’ll find a meal to suit your taste in Auvillar. You’ll find a complete list here.

For more practical supplies, you’ll also find a bakery and supermarket in Auvillar.

If you are leaving Auvillar on a Sunday morning, take advantage of the weekly fresh food market, held in Place de la Halle, to purchase supplies for a picnic lunch.