On the 750-odd-kilometre walk along the Chemin de Saint-Jacques you’ll pass dozens, perhaps hundreds, of churches, chapels and cathedrals. But if you call in to only one on your way from Le Puy-en-Velay to Saint-Jean-Pied-de-Port, make it Chapelle Saint-Nicolas in Harambeltz.

Most walkers pass through the tiny hamlet of Harambeltz with barely a sideways glance. If it’s approaching midday, you might consider taking advantage of the shade provided by the covered porch of the rustic church to rest your feet and enjoy a picnic lunch.

And yet, as I thought about how I would structure my suggested itinerary along this section of the GR 65, an overnight stop in Harambeltz was the first thing I locked in. Everything else was made to work around it.

Why is it so special? 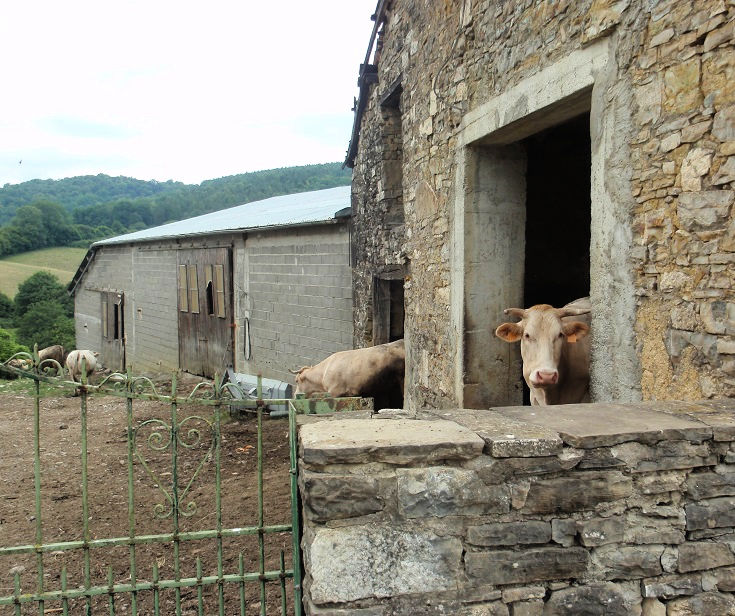 First impressions are likely to be of a small farming community, much like the 200 or so you have passed along the first 700 kilometres of the Chemin de Saint-Jacques. Just beyond the last house is a church—dedicated to Saint-Nicolas—and, let’s face it, you’ve passed a good many of those also! 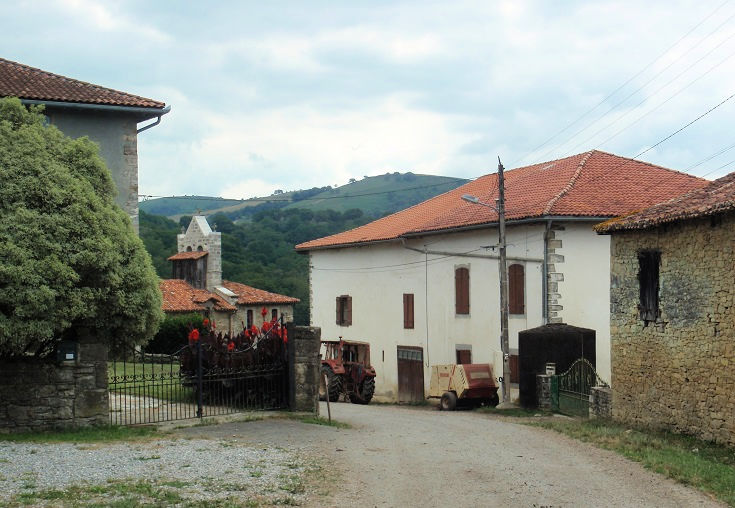 From the outside, the building is an odd mixture of stonework and patched stucco. Most of the current church dates from the twelfth and thirteenth centuries, although stones around the base of the building are thought to be much older—remnants of the original church built in the ninth or tenth century. 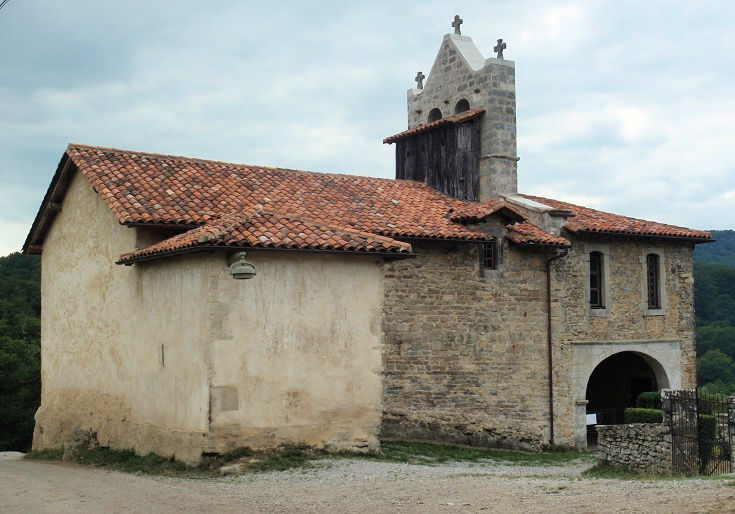 In the seventeenth century, the sacristy was added on the eastern wall, but 300 years later, the building was in much need of repair.

In 2001, the church was classified as an Historic Monument. Five years later, the local villagers formed an association—Les Amis d’Harambeltz—dedicated to preserving the building. Much-needed grants from local and regional governments added to funds provided by the villagers and, in June 2008, restoration work began. By December 2010, the project was complete and the church was reopened to the public shortly afterwards. 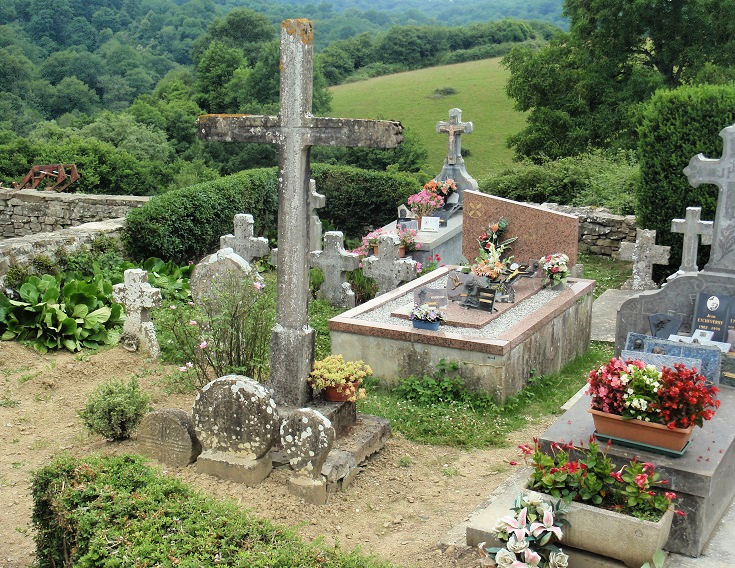 Inside the church is a feast for the eyes. Faux marble walls are festooned with carvings, paintings and statues in shades of orange, apricot and blue. It’s hard to know where to look first, so take your time and linger—soaking up the atmosphere and exploring all the details. 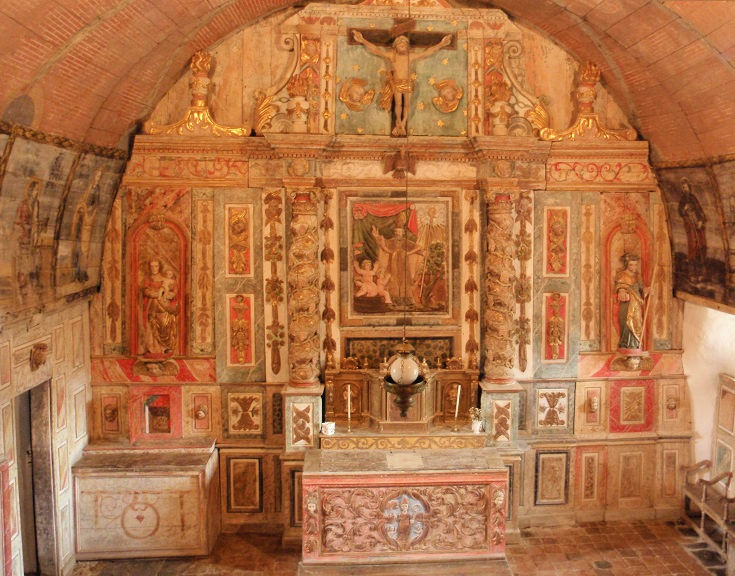 The Friends of Harambeltz website advises that from 2019 until 2022, the church will only be open for groups of ten or more visitors who have made prior arrangements. Entry is by donation and proceeds fund the continued maintenance of the church.

Given that you are unlikely to be walking in a group of ten, I recommend that you contact the community via the website and ask if it is possible to be allowed access to the church on the day you will be passing through. If access is not possible, you’ll find a glimpse of the interior here.

Harambeltz consists of only four farmhouses, yet the walls of the chapel pay tribute to four members of the Etcheverry family, lost during WWI If you arrive in Harambeltz via the variante that passes through Uhart-Mixe (as the majority of walkers do), you’ll miss another, less well-known gem along this section of the Chemin de Saint-Jacques. Instead of turning left towards Harambeltz when the variante reaches the GR 65, turn right and continue along the GR 65 towards Stèle de Gibraltar. 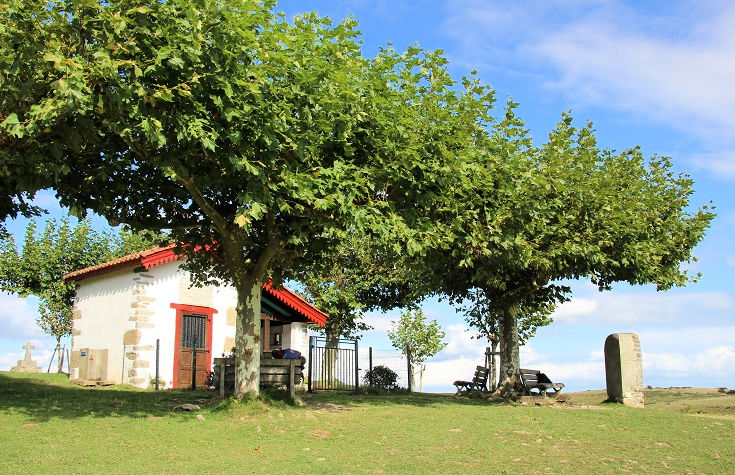 After fifteen minutes of gentle uphill walking, you’ll arrive at Chapelle de Soyarza. The chapel is small but the views are magnificent and well worth the extra time required to visit. 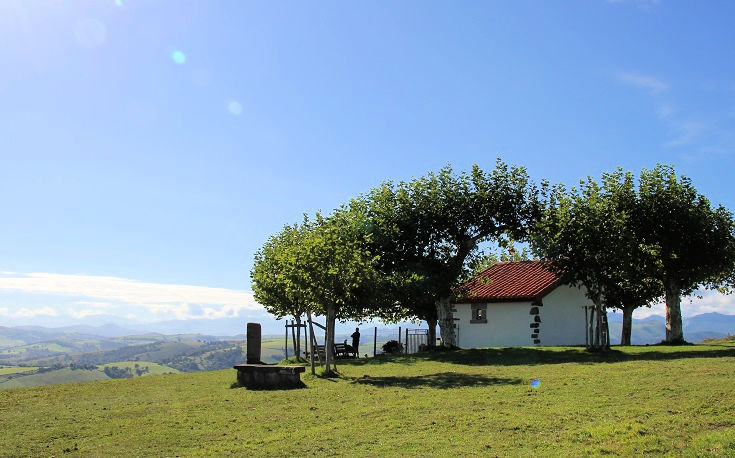 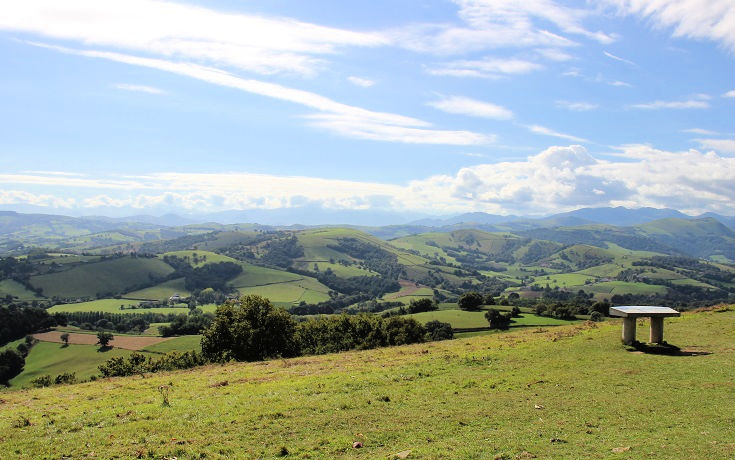 Which long-distance walk in France visits Harambeltz and the Chapelle de Soyarza?

Where is Harambeltz, France?  Find it on Google maps

My suggested itinerary was thrown into disarray when the only chambre d’hôte in Harambeltz closed in 2019. Last year, it underwent renovations and, I was thrilled to learn, reopened in April 2021 under the care of Marie, a former pilgrim and Camino walker (and my room is booked for this July). You’ll find all information, including tariffs, contact and booking details at—

If Etchetoa is fully booked, I recommend walking a further four kilometres (2.5 miles) along the trail to the village of Ostabat-Asme where you’ll find accommodation at—

Where to eat in Harambeltz

There is nowhere to buy food in Harambeltz. Bring your own picnic basket and if the sun is too hot or the day is wet, enjoy lunch under the shelter of the church porch. If the weather is kind, relax in front of the Chapelle de Soyarza and soak up the glorious views.

Evening meals are available at Etchetoa. Let Marie know when booking your room.