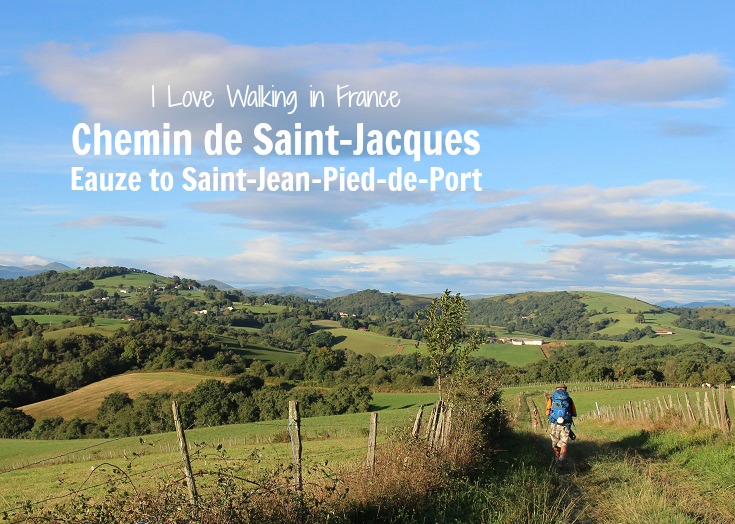 As the GR 65 draws nearer to its final destination, meandering from Eauze to Saint-Jean-Pied-de-Port, it passes through some of the most spectacular scenery to be found along the Chemin de Saint-Jacques du-Puy. The lush green slopes of the Pyrénéan foothills, the crisp white houses with deep red or green window shutters stand in sharp relief to clear blue skies and fluffy white clouds.

This is French countryside at its most picturesque—dotted with tiny villages and punctuated by church steeples. And although the view is of rolling hills and distant mountains, you’ll find this to be an easy walk—mostly flat and never strenuous. 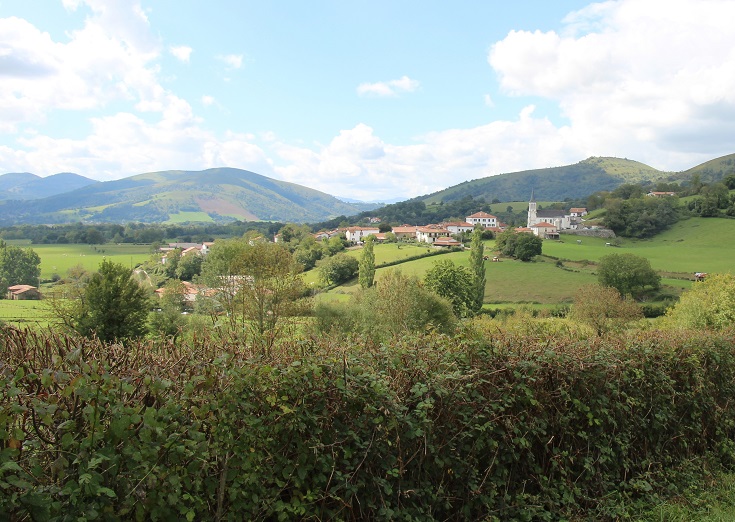 Before reaching the splendour of the Pyrénées, the GR 65 winds through endless cornfields—tall green leafy stalks that block the view and threaten to engulf the path or, at other times, broad fields stretching as far as the eye can see. 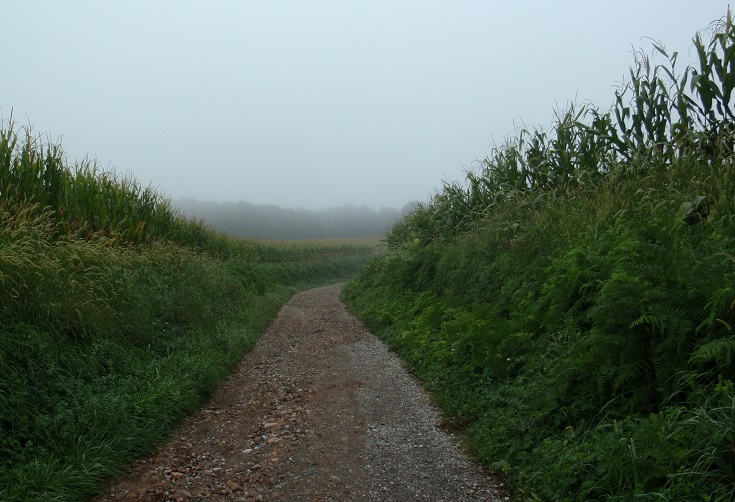 Walls of corn along the Chemin de Saint-Jacques

Just when you think it’s all a bit monotonous, a field of sunflowers appears and those dull stalks are replaced with cheerful yellow faces.

To see the sunflowers at their best, you’ll need to walk during the summer months. France can be uncomfortably hot at this time of year with temperatures reaching 40⁰ Celsius (100⁰ Fahrenheit). Carry as much water as you can manage as there is often little shelter along the path. 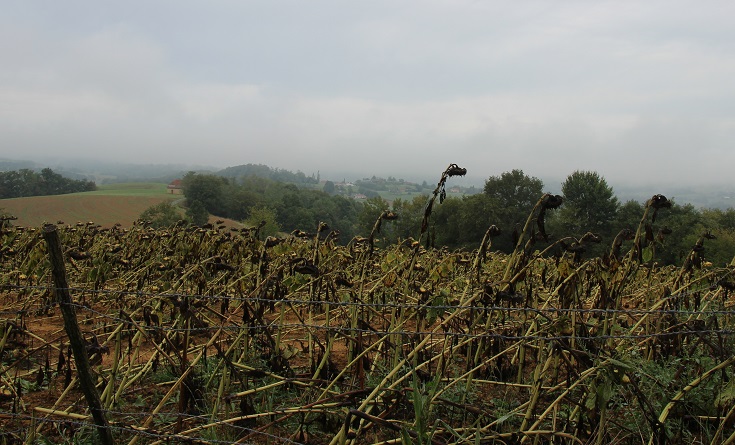 By early September, the sunflowers are well past their best and a little more imagination is needed to appreciate their beauty.

If you’ve walked the entire path Le Puy-en-Velay, your arrival in Saint-Jean-Pied-de-Port will, no doubt, bring many mixed feelings. There will be relief and gratitude that you’ve arrived safely, that you can sleep in the next morning (and any blisters will begin to heal!). But there will also be sadness that the friends you’ve made over the past weeks will be going their own way—and that tomorrow you’ll return to the ‘real’ world of bus timetables and everyday activities.

Unless, of course, you’re continuing along the Compostelle to Santiago…

Where is the Chemin de Saint-Jacques in France? 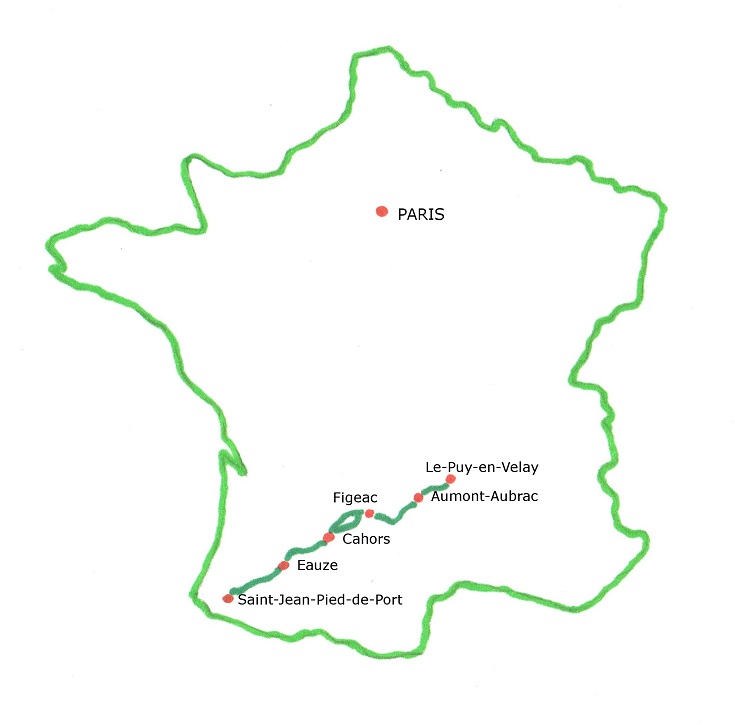 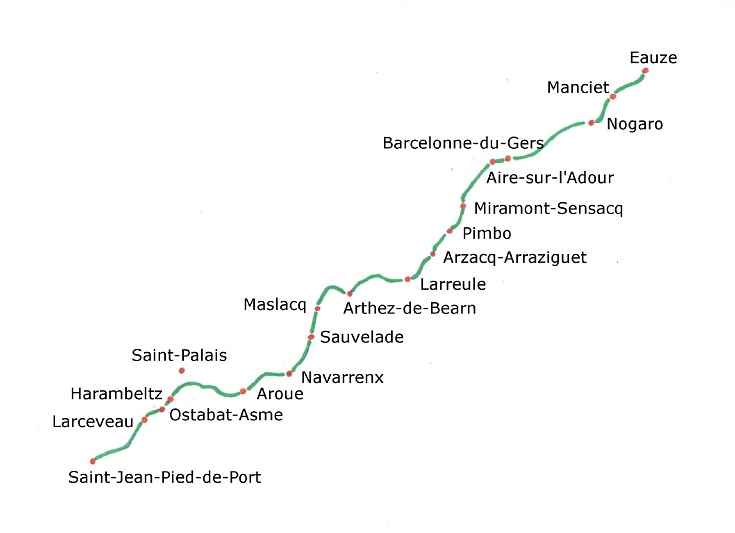 Highlights of Stage 5: Eauze to Saint-Jean-Pied-de-Port

Visit some of France’s most beautiful churches

Between Eauze and Navarrenx, you’ll have the opportunity to visit several beautiful churches.

Église Saint-Nicolas in Nogaro was consecrated in 1060 and is one of the oldest fortified churches in southern France. Inside, you’ll find many original features, including the eleventh-century baptismal font, and frescoes dating from Roman times which are thought to be among the oldest of their kind in existence. 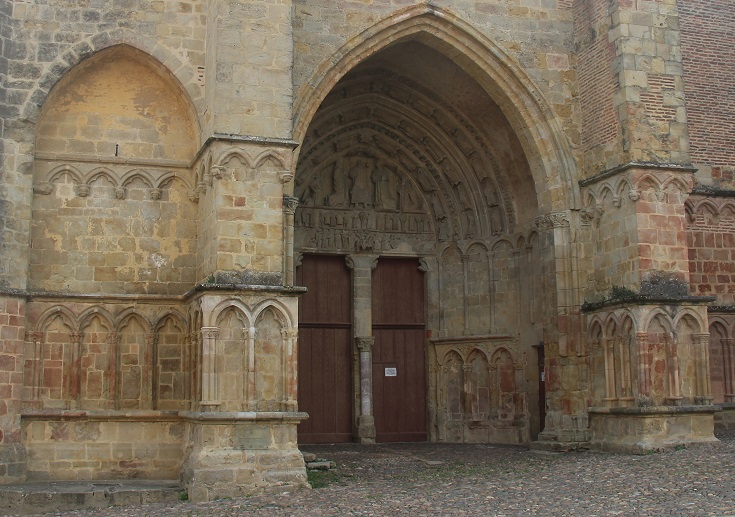 As you climb the hill leaving Aire-sur-l’Adour, stop by the church dedicated to Sainte-Quitterie, a fifth-century princess decapitated by her fiancée when she refused to denounce her faith and marry him.

An hour’s walk past Miramont-Sensacq, you’ll pass l’église de Sensacq—an eleventh-century church dedicated to Saint-Jacques. On the morning I passed through, the covered porch provided welcome cover from the drizzling rain but it was easy to imagine a row of blankets set out by sleeping pilgrims.

Further along in Larreule and Sauvelade, you’ll find abbey churches where early pilgrims found shelter and a nourishing meal.

For me, the highlight of this walk was the church in the tiny community of Harambeltz. Nestled among the farmhouses and cowsheds, its simple stone walls hide a meticulously restored baroque interior.

In 2021 and 2022, the church will only be open for groups of ten or more visitors who have made prior arrangements. If you don’t have ten in your group, be sure to check inside the covered porch in case the doors are open. 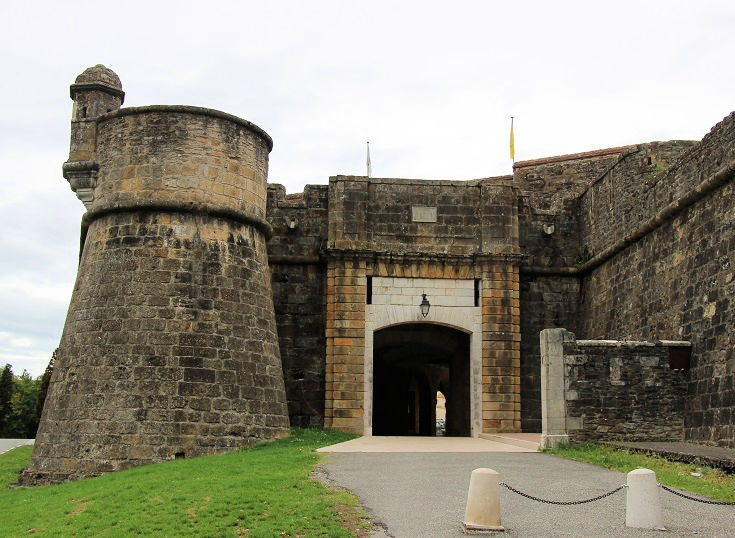 Thick stone walls of the defensive remparts in Navarrenx

Six days after leaving Eauze, you’ll reach Navarrenx—one of France’s ‘most beautiful villages’. Surrounded by ramparts and defensive fortifications, the town occupies a commanding position overlooking the river. Take an hour, an afternoon, or perhaps a rest day, to explore the stone walls and beautiful medieval buildings. 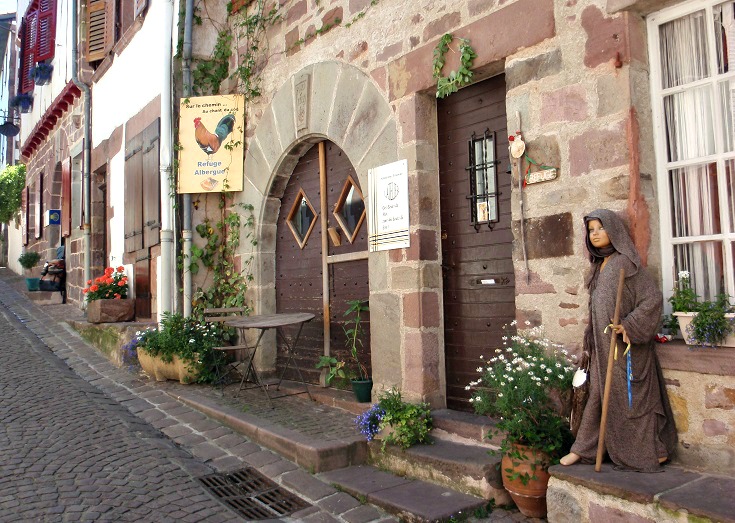 Three days later, your walk ends at another of France’s ‘most beautiful villages’—Saint-Jean-Pied-de-Port. The GR 65 enters the village through Porte Saint-Jacques and continues along Rue de la Citadelle—an impossibly pretty lane lined with chambres d’hôtes, souvenir shops and stores selling anything a pilgrim headed to Santiago could possibly want.

Navarrenx and Saint-Jean-Pied-de-Port are both recent additions to Les Plus Beaux Villages de France, gaining their classifications since 2014. Formed in 1982, with the aim of protecting and promoting the heritage and beauty of small towns throughout France, the association of Les Plus Beaux Villages de France has grown to include 159 villages scattered throughout the country. 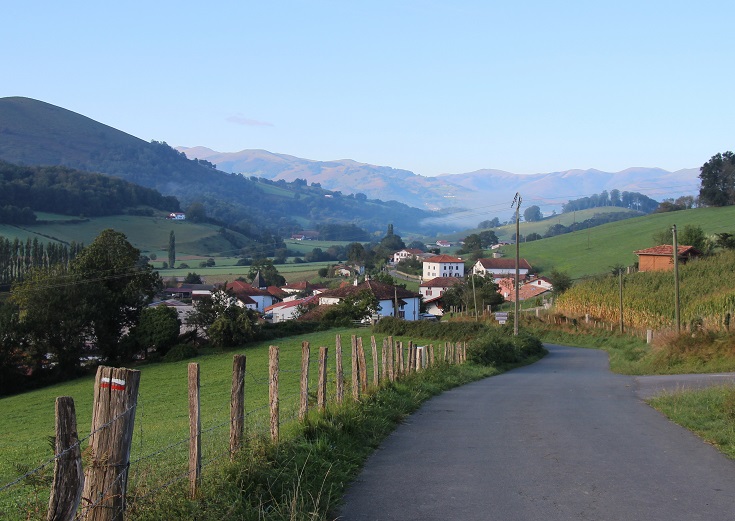 Dine at a Michelin-starred restaurant

Ten kilometres from Aire-sur-l’Adour, in Eugénie-les-Bains, you’ll find the three-starred Michelin restaurant, Les Prés d’Eugénie. Michel Guérard has delighted diners here for the past forty years and is considered one of the founding fathers of nouvelle cuisine.

(It’s a little further from the trail than I’d normally venture for dinner but some opportunities come along only once in a lifetime. If you’re spending the night in Aire-sur-l’Adour and prefer not to travel far, I can thoroughly recommend the restaurant at Chez l’Ahumat.) 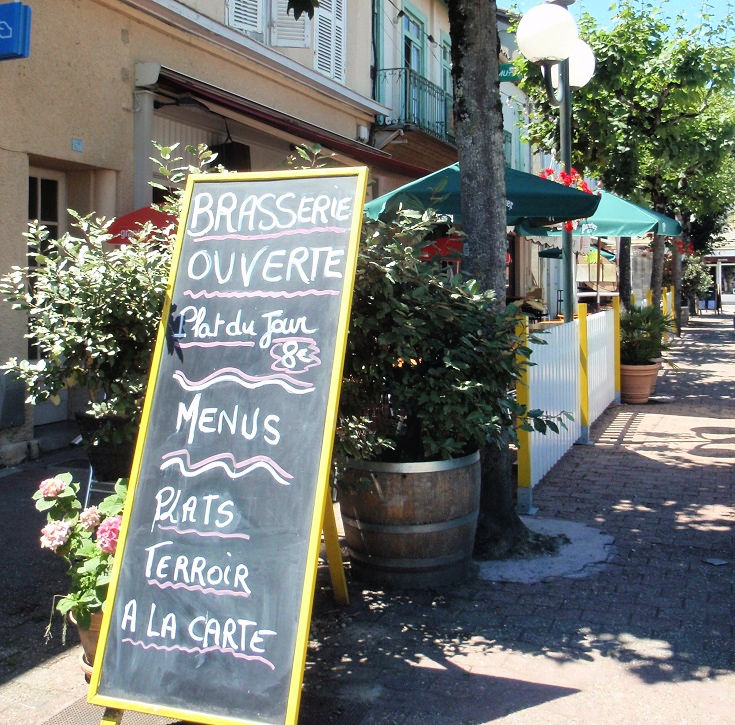 Several towns along this section of the Chemin de Saint-Jacques host a weekly fresh food market. You’re sure to encounter at least one during your visit, so make the most of the varied local produce and stock up on fresh figs, nuts and other seasonal offerings to sustain you throughout the day. 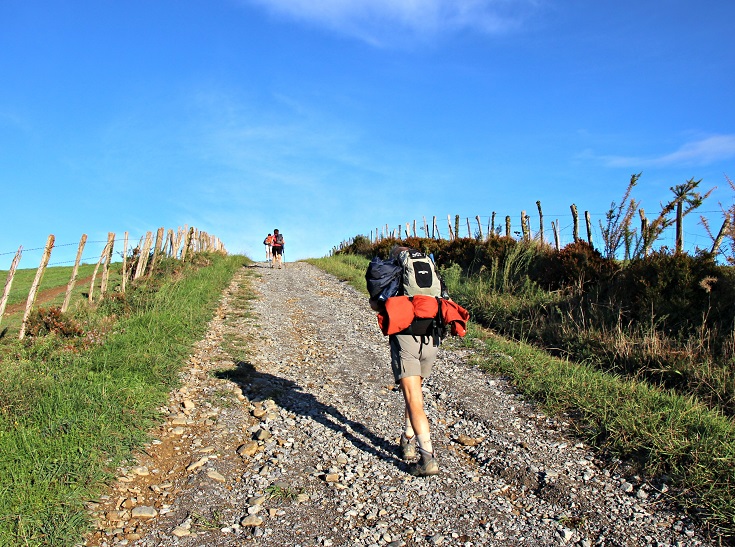 If you have been walking for several weeks—perhaps having started your walk in Le Puy-en-Velay—you may be looking forward to a day of rest and relaxation. The ‘most beautiful village’ of Navarrenx, with its ancient fortified walls, historic buildings (and good range of cafés) is an ideal place to relax or explore, depending on your energy levels and tired feet. If you approach Harambeltz via the variante that passes through Uhart-Mixe, you’ll miss one of the less well-known gems along this section of the Chemin de Saint-Jacques. Instead of turning left towards Harambeltz when the variante rejoins the GR 65, turn right and continue along the GR 65 towards Stèle de Gibraltar and Saint-Palais. After fifteen minutes or so of gentle climbing, you’ll reach Chapelle de Soyarza and be rewarded with magnificent views of the Pyrénées. (This is explained in greater detail in the Harambeltz section of the I Love Walking in France guidebook.) The two longest days of walking from Eauze to Saint-Jean-Pied-de-Port—between Nogaro and Aire-sur-l’Adour and later between Pimbo and Pomps—cover 27.5 kilometres (17.2 miles), but like the rest of this southern-most section of the GR 65, the way is mostly flat and the walking is easy. If you prefer to break this distance over two days, there are several small hamlets between the towns that offer accommodation. Pimbo on a wet, miserable morning

Distances are given from the starting point of Le Puy-en-Velay (and assume the shorter, traditional GR 65 path has been followed between Figeac and Cahors).

If you have followed my suggested itinerary along the Célé valley, you’ll have covered 553 kilometres (345.6 miles) when you reach Eauze.

Explore each stage in more depth –

Ready to plan your walk along the Chemin de Saint-Jacques du-Puy?