The second day of walking from Martel to Rocamadour brings you to the ‘most beautiful village’ of Collonges-la-Rouge. And since you’ve walked only eight kilometres (five miles) from Turenne, there’s oodles of time to enjoy a leisurely lunch, poke around the backstreets and do a bit of souvenir shopping before deciding where to have dinner. 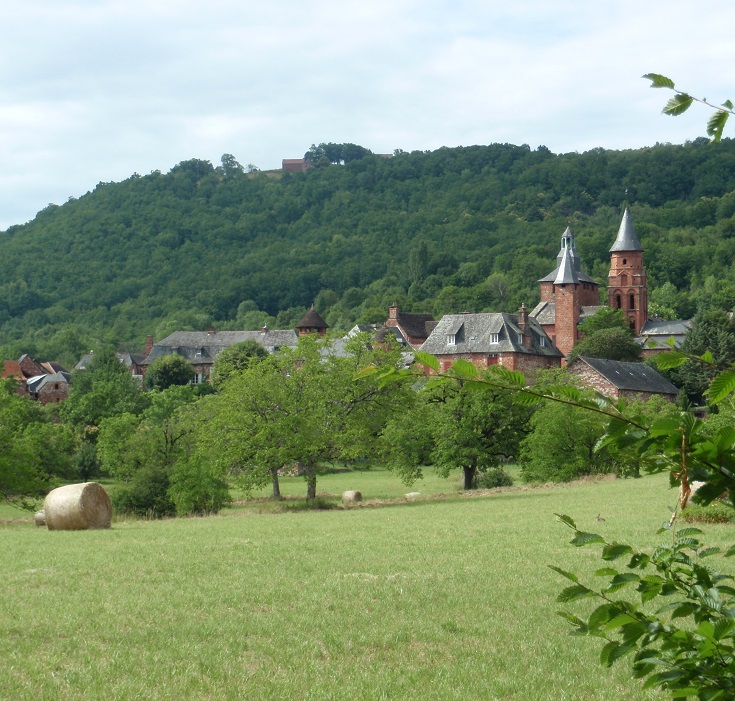 Originally founded by monks in the eighth century around the abbey church of Saint-Pierre, Collonges-la-Rouge is one of the highlights of this eight-day walk.

The village takes its name from the Latin word for colony and the deep red of the local sandstone used in the construction of the buildings. The unusual colour and an abundance of flowers make every corner ‘Insta worthy’ and long after you leave, images of this most beautiful village will be instantly recognisable. 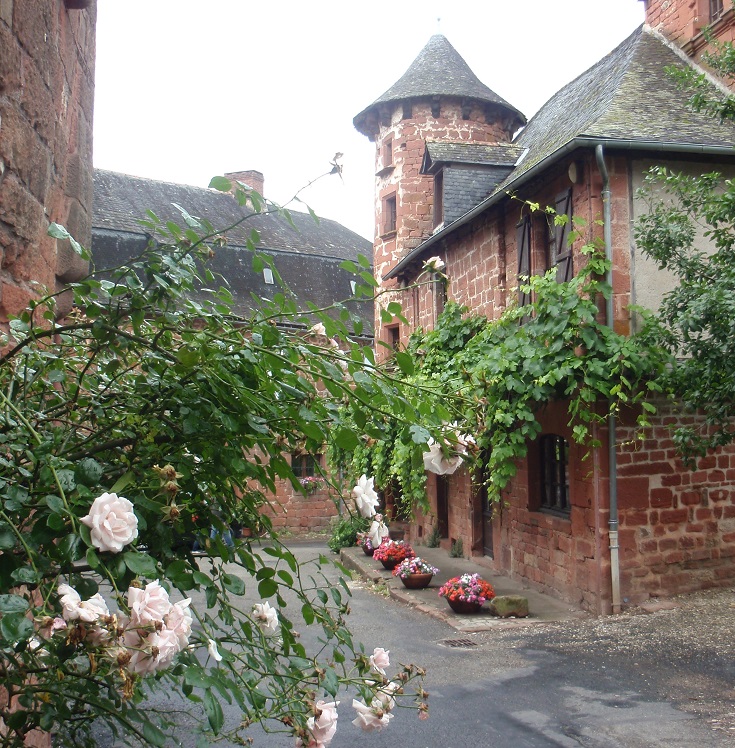 Pink roses against the red brick houses of Collonges-la-Rouge

The best way to start your visit is over a leisurely lunch at Auberge de Benges. Arrive early and choose a table on the edge of the terrace with views over the back garden and surrounding countryside. 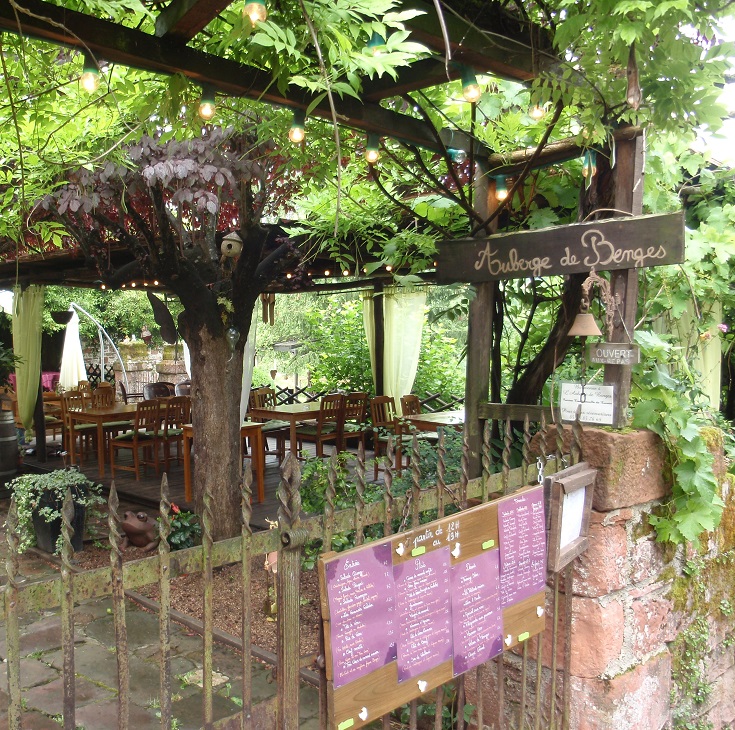 The food is superb and varies according to the season. I can personally recommend the Anchaut de Porc Maison, Lentilles du Puy et Pomme de Terre aux Cèpes (ham steak, lentils and fried potatoes) which is so good I’ve had it twice! Luckily all the miles you are walking will soon dissolve those calories!

Poke around the backstreets

After lunch, call in to the Tourist Office on the main street and pick up a map—marked with all the notable buildings and giving a brief history of each. 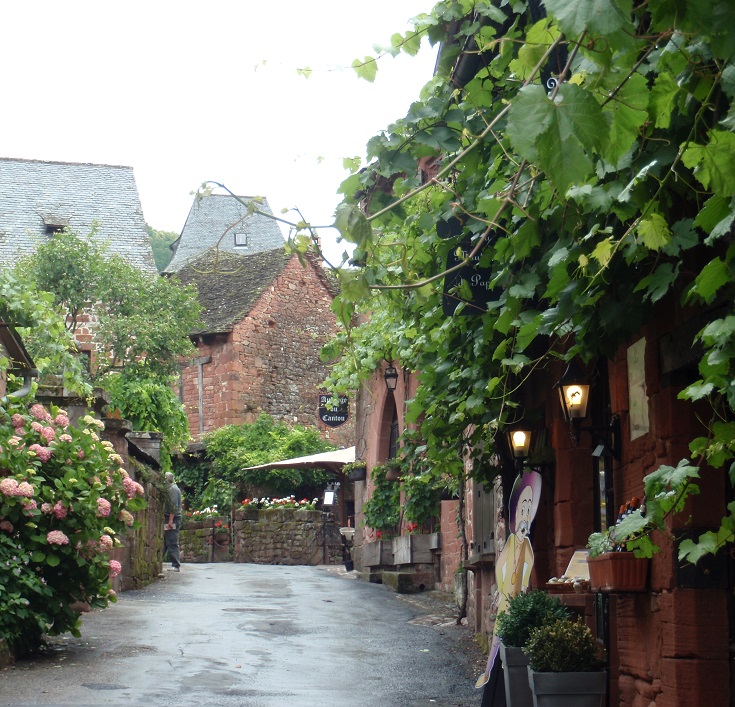 As you wander through tiny alleys, you’ll pass the Halle aux Grains, or communal ovens, which date from the Middle Ages. This is where villagers gathered to bake bread, although nowadays, the ovens are fired up only once each year, on the first Sunday in August. 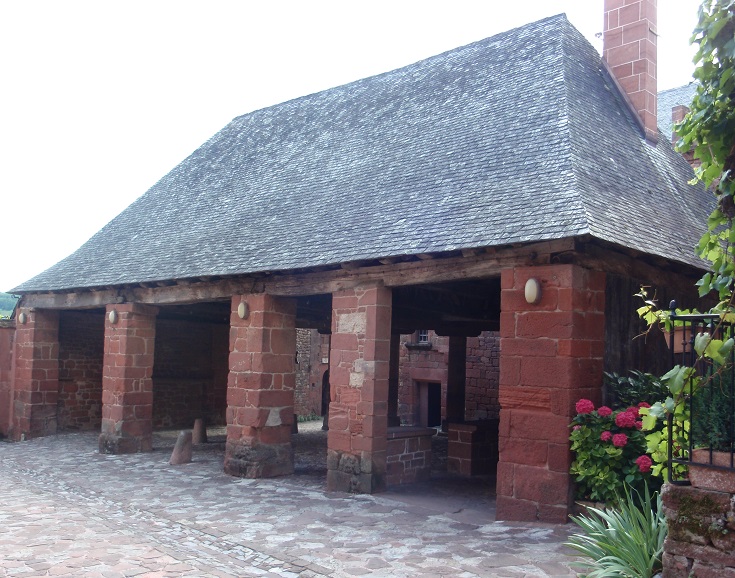 Back on the main street is la Maison de la Sirène (House of the Mermaid), now home to les Amis de Collonges (Friends of Collonges). This sixteenth century house features a carving of a mermaid to the side of the door—an unexpected sight in a village so far from the sea!

There are over a dozen equally enchanting corners throughout the village and, if your French is up to it, guided visits leave from the Tourist Office.

Abbaye church of Saint-Pierre and the Chapelle des Pénitents

Collonges-la-Rouge was founded in the eighth century, growing around an abbey church built by monks from Charroux (240 kilometres, 150 miles to the west). The church has been renovated many times since then but the bell tower and tympanum above the door are both from the twelfth century.

Close to the church is the Chapelle des Pénitents where the local villagers—who were not allowed into the abbey—worshipped. The chapel is no longer used for worship but houses an exhibition of events organised by the Amis de Collonges.

Make sure you leave some time for shopping and take home a reminder of your stay. The main street is lined with gift shops which open in the tourist season—generally from April until September—and Mirjam’s, next to Chapelle des Pénitents, is a great place to start. There will always be room in your bag for a pair of earrings or another scarf! 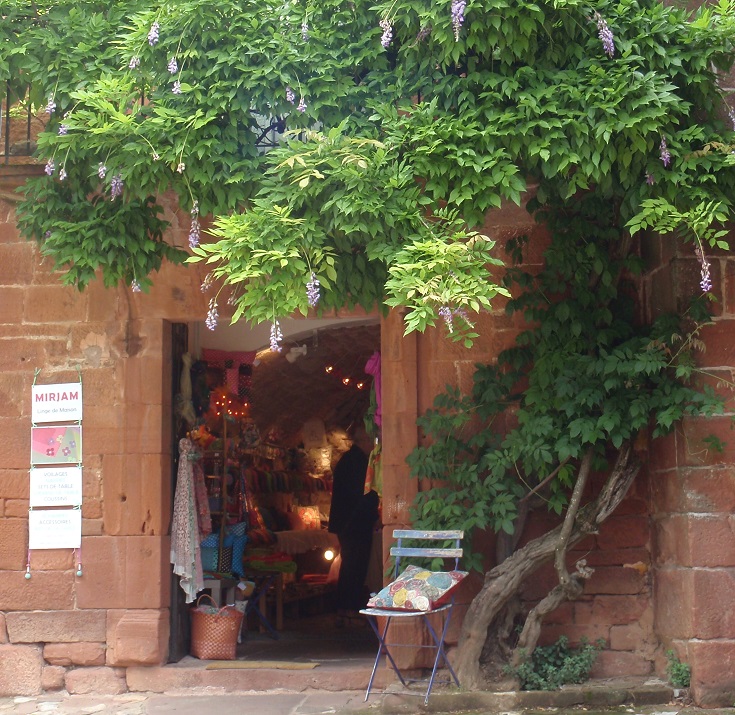 If shopping is not your thing, there are many cafés in Collonges-la-Rouge and finding a delightfully pretty corner to while away the afternoon will not be a problem. Of course, choosing just one—and another for dinner—could be! 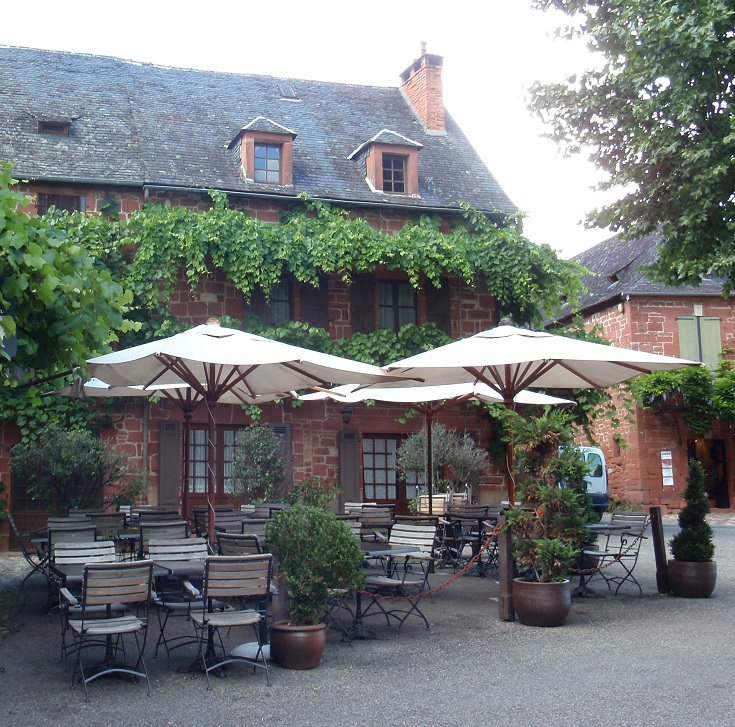 Collonges-la-Rouge was the first of the Plus Beaux Villages de France—an association formed in 1981 by Charles Ceyrac, then mayor of the village. At the time, many small towns were struggling economically and there was a danger that, as the younger folk left to find jobs elsewhere, preservation of the beautiful architecture and historical charm of these villages could not be maintained. One year later, the mayors of sixty-six equally beautiful villages had joined him and the association was formed.

Today, 164 villages have met the criteria necessary to join the ranks of ‘most beautiful villages in France’. In addition to Collonges-la-Rouge, you’ll find five others on this walk from Martel to Rocamadour including Turenne, Curemonte, Autoire, Loubressac and Carennac.

Which long-distance walk in France visits Collonges-la-Rouge?
Martel to Rocamadour

Where is Collonges-la-Rouge, France?  Find it on Google maps

Collonges-la-Rouge is 26.8 kilometres (16.8 miles) from the starting point of Martel.

If you are following my suggested itinerary (which you’ll find here), you’ll arrive in Collonges-la-Rouge late in the morning on the second day of the walk. You could grab a quick lunch and rush on to the next village of Curemonte, but I recommend staying here for the night—a more relaxed pace which allows plenty of time to relax and explore the village.

You’ll find the Tourist Office on the main street of the village (on your right, heading downhill if you arrive from Turenne or the carpark).

Where to eat in Collonges-la-Rouge

There are more cafés in Collonges-la-Rouge that you could possibly hope to eat at in less than a week. They all look wonderful! If you only have time for one, make it Auberge de Benges.