The 1,522 kilometre (almost 1,000 mile) walk along the Chemin de Saint-Jacques du-Puy (also known as the GR 65 or Way of Saint-James) from Le Puy-en-Velay to Saint-Jean-Pied-de-Port in southern France and then on to Santiago in northern Spain, starts here on the steps of Cathédrale Notre-Dame du-Puy. The first pilgrim to make the journey was Bishop Gothescale who set out in the tenth century. The cathedral was somewhat smaller then, but word spread and other pilgrims arrived to follow in his footsteps. The little church was unable to cope with the influx of visitors and over the next two hundred years, a much grander church was built on the same site overlooking the town.

Today, Le Puy-en-Velay is a town rich in historical monuments. It would be a shame to leap off the train and start walking without taking some time to explore the town. But if you are in a hurry, you can take a virtual tour here!

Every afternoon at five-thirty, les Amis de Saint-Jacques (the Friends of Saint-Jacques) host of gathering at le Café de Pèlerins where walkers planning to set out the following day can meet, share stories and their plans for the next few days. If you are walking alone, this can be a good opportunity to find some walking buddies 🙂

Most walkers I spoke to at the café planned to start their walk after attending the Pilgrims’ Mass which is held in the cathedral every morning at 7 am. (Alas, I was too busy dreaming of breakfast to go to church—but I had lit several candles the day before and considered myself sufficiently blessed!) Before heading out into the wild blue yonder, the Chemin de Saint-Jacques winds its way through the streets of Le Puy-en-Velay, past cafés and lace shops and, just in case you’ve forgotten something—supermarkets, banks and stores selling hiking gear.

Leaving Le Puy-en-Velay, the path climbs a gentle hill into the surrounding farmland and passes the first of many crosses along the way. Many walkers place a stone beneath these crosses—to represent a worry or a fear, some part of their life that no longer serves them well that they would like to leave behind. 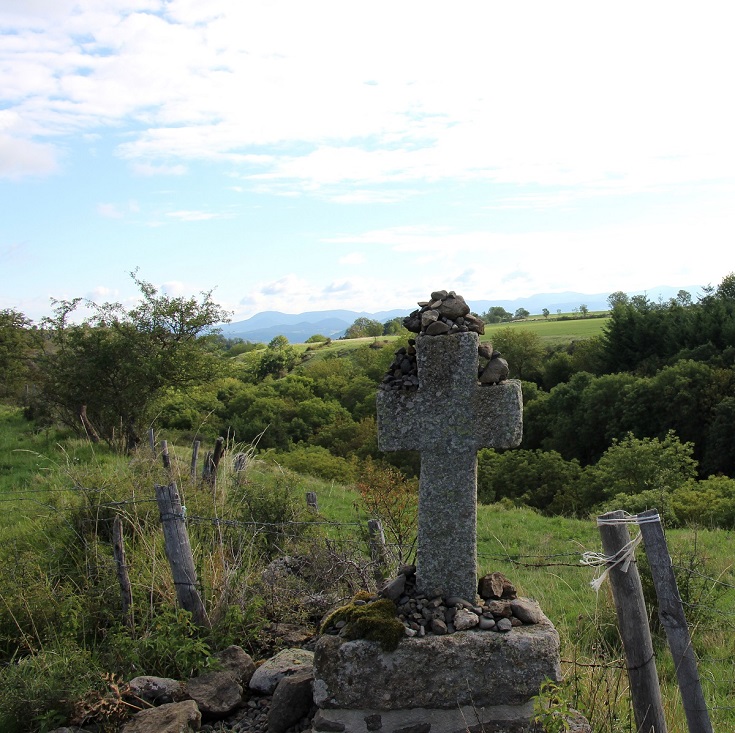 Easy walking and, in early September, there are the first signs of autumn in the leaves.

Two hours after leaving Le Puy-en-Velay (eight kilometres / five miles), you’ll reach the village of Saint-Christophe-sur-Dolaison. There are two cafés here but unless you’ve had a late start to the day, it may be too early for lunch.

There is also this beautiful church which was built some time during or before the twelfth century (since it is mentioned in records of 1161). The church has been a listed historic monument since 1907. Unfortunately, when I visited in September 2015, it was filled with workmen completing further restoration and I was unable to go inside 🙁

…and on to the hamlet of Lic – a cluster of houses and farm buildings at the end of the tarred road. Farm houses in the hamlet of Lic

Back in the wide, open spaces and the GR 65 has narrowed to a goat track! Somewhere between Lic and Montbonnet

One kilometre before the village of Montbonnet is the ancient chapel of Saint-Roch.

This tiny church has welcomed pilgrims since the tenth century, although it has been restored several times since then. Inside the chapel is a statue of Saint-Roch (on the right, carrying a pilgrim staff), a doctor from Montpelier who fell ill with the plague while on a pilgrimage to Rome. Legend tells us that after retreating to the forest to die, he was befriended by a dog who fed him from his owner’s table. Roch recovered and returned to Montpelier. There, he was arrested as a spy and died in prison five years later. Roch became the patron saint of pilgrims—and dogs—and this is the first of many chapels along the GR 65 that bear his name. Cross on the edge of Montbonnet

Not far past the Chapelle Saint-Roch is the village of Montbonnet. Many of my fellow walkers planned to stop here and although I pushed on to Saint-Privat-d’Allier, if I were doing the walk again, Montbonnet is where I would spend the first night (see my Suggested Itinerary).

The village of Montbonnet was barely more than a dozen houses and a café but I took only one photo—this cute kitten—not because there was nothing else worth capturing, I think I was too distracted by the thought of lunch and a cold drink!

(NOTE: Cafés in France are often closed—on a Monday (or at least one day each week), because it’s not lunch time, or when the owner goes on vacation. Always carry plenty of trail mix and water.) In Montbonnet, you’ll find accommodation at –